There's no correlation between proper spelling and creepo tendencies.

It’s a Thursday at around 2 in the afternoon so I’m assuming the guy outside the Chevron holding the sign “Will watch your kids for beaf jerky” doesn’t have another job. That’s a good thing because it shows he’s not going to have another gig that interferes with watching my kids.

My kids are in the backseat driving me nuts, and one of the biggest obstacles I’m pushing past is how to not look too desperate and weird by asking this guy if he's available immediately. There are, however, a few questions in my mind, as a responsible parent, that I would be stupid not to probe into.

Here is my mental list of pros and cons for hiring this man outside the gas station to watch my kids for “beaf jerky.”

The fact that he likes beef jerky says he gets protein in his diet. Protein is essential for our brains, bones, and stamina, and aids in weight loss if you eat it solely on something like an Atkins-based diet. My kids also like beef jerky (in reasonable amounts; I mean, if someone force fed them large amounts all at once that could obstruct their airway, that obviously may be frowned upon). Unless he is referring to Slim Jim AS beef jerky… that would be a deal breaker. Slim Jim is certainly not real jerky. Authenticity, I think, is super important here.

His sign looks like shit. He spelled beef with an “a,” but I can also see how that could happen because meat is spelled with an “a” and he probably just got the two confused. I mean there are tons of other words he might use normally spelled with “ea,” like “death” or “sealed shut.”

He looks like Nick Nolte before the DUI. Before Nick Nolte's DUI mugshot he played some outstanding roles. Things like the guy in The Prince of Tides who overcame a tough childhood and went on to make out with his therapist. Just because someone had a tough childhood doesn’t mean they can’t go on to hold a sign at a gas station and do a stellar job watching your kids. 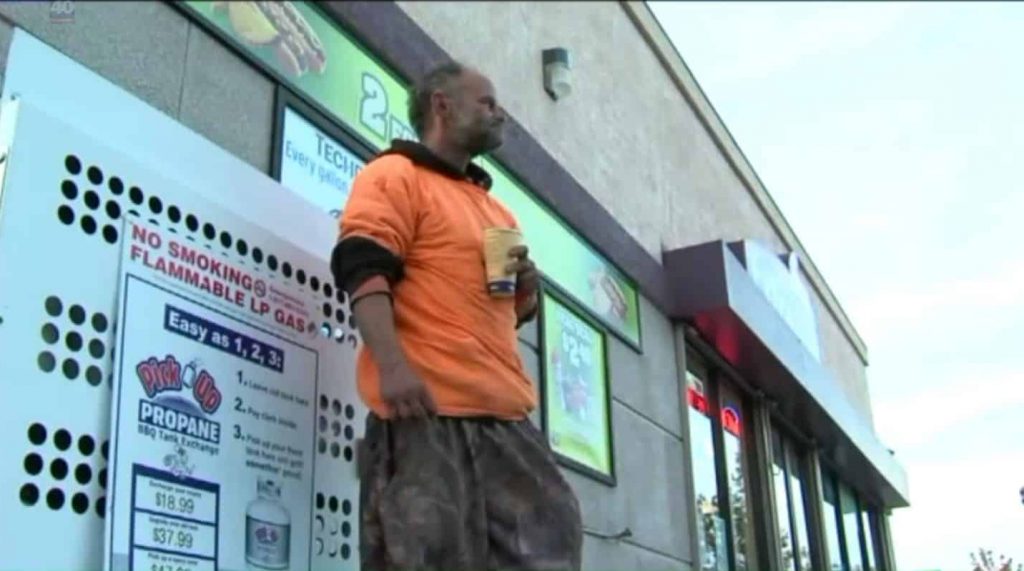 Underneath the writing “Will watch your kids for beaf jerky” it says in parentheticals “(don’t have a phone, but will call you).” Is it really a good idea to market yourself that way? I used to be in marketing and you really shouldn’t ever connote anything negative if you want to sell a product.

He’s smiling. Out of all the caretakers I’ve had watch my kids, only about 2% of them actually smiled. It would be nice to finally find someone with a pleasant, albeit mildly crazed disposition, like Jack Nicholson in The Shining.

It would have been more eye-catching if he had been spinning the sign, but that gets hard I’m sure, with the makeshift arm that looks like a methhead soldered SPAM containers and threw a tiny rake on the end. Plus, I definitely don’t want to get pegged on a workplace discrimination suit by not hiring someone simply because they look like RobocCop, Nick Nolte, and the dumpster outside a breakfast diner had a baby.

So, in conclusion, it’s probably not a good idea; just a gut feeling. I'd even feel strange, I guess, fantasizing that I would enjoy having my kids carted off by some gas station crazy person. I think I’m just gonna grab a few of these beef jerky containers for the road and hope for the best.

Related
Acceptable Reasons to Wake Up Your Parents in the Middle of the Night
Lauren Spinabelli
Guy Fieri Resigns As Mayor of Flavortown
Ben Hargrave
Quotes from Teaching Your Parents Zoom, or HAL from “2001: A Space Odyssey”?
Kate Anderson
Resources