Listen Up, Period C Lunch: I AM A TWITTER GOD!

I will rule Westwood High with an iron 7,500 follower fist!

I DID IT! I've created fame. I've bottled greatness. I've put a stopper on death. Okay, maybe not that last one. But I HAVE climbed the unclimbable Everest of viral domination. 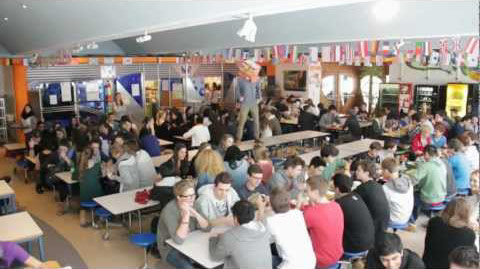 My thoughts are your thoughts. Your hearts beat in time with mine.

Half the school follows my @FedoraExplorer Twitter handle. The rest will soon join. How can you deny my delightful niche of photoshopping fedoras on beloved Star Wars characters??

Mr. Rose, what need have I for a passing grade in US History when even you re-tweeted my meticulous #FEDORAING of the entire clone army on Geonosis? Surely YOU are MY student!

So… peons, mortals… continue going to your proms and drama club meetings. Eat your chicken patties and achieve your Section 7AA dreams. But remember that you are NOTHING.

Clint, you were All-Conference Honorable Mention last season, and yet your tweets go unfavorited. Principal Legree, you hold three college degrees, but have only a pathetic 583 followers. And you claim to rule me?

Before, I was a middle of the road mathlete. I excelled at logarithms, but was humble enough to admit calculus challenged me. And I was only third chair horn behind the uninspiring Jennifer Stevenson. You know, the one with cankles?

BUT from now on, I, TRAVIS BARTHOLOMEW RINGSTAD, will dictate what is trendy and popular. Deep Space Nine is now the preferred Star Trek series, and logarithms have replaced calculus as the dominant form of mathematical inquiry.

Sure you could revolt by pooling together all your Twitter followers. You could enact a massive online promotional campaign and perhaps reach my lofty social media pinnacle in a couple of long, painful months.

But even then you would never step to my incredible 8.9 to 1 follower to following ratio.

And still daily my power grows. Tomorrow I shall surely have 7,700 followers. Next week, 87,000, and by early 2015, Katy Perry will be shuddering in her scanty britches as I take the top Twitter spot.

Alexandra Axline, you with the devilish smile and rocking body, join me! Come make love to a champion! Devon's not getting any younger, but soon I will conquer Vine and Tumblr too. There is no ceiling to my viral fame!

To quote the legendary hair metal band Twisted Sister, "You are all worthless and weak." As hopeless as someone in the belly of the Sarlacc on Tatooine. As purposeless as the "Time's Orphan" episode of Deep Space Nine which interrupted the narrative of the Dominion War. As powerless as House Harkonnen to the Muad'dib's assault on Arrakis.

You dare throw chicken patties at me!? And milk cartons?! And backpacks?! And lunch trays?!

Back off Devin! Get away from me Kevin! You may rip my TARDIS sweatshirt from my body, but you cannot take away my fame!

Mr. Rose, HELP! Principal Legree, I order you to stop them!

You miserable mongrels don't deserve me!!!

From where I lie on this lunchroom floor I will tweet no more forever!

You will rue the day I hung up my fedora!!

Related
I Am Your Period Underwear and I Deserve a Goddamn Purple Heart
Lauren Zmirich
Help! My Sourdough Starter Became Sentient and Now It Won’t Stop Asking Me to Listen to Jam Bands
Kristina Grosspietsch
A Quick Reminder that Donald Trump’s Twitter is Amazingly Cringeworthy
Hayden Church
Resources