The 7 Most Annoying Types of 911 Callers

I am currently in the profession of saving lives. I go to work and save freakin' lives. I am a virtual shield; a telephonic Thor, if you will, to thousands of scared and incompetent people. My weapon of choice isn't a sawed off Winchester or Rick Grimes six-shooter. Nah, man. I'm strapped and riding dirty with a headset, yo. 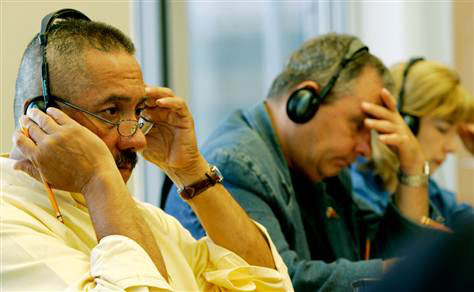 Every day I raise that sucker up, pause for a moment of clarity, and slowly lower it down onto my head and plug in. Some days I sit right down and get at it. Other times, I remain standing at the console, arms folded and head cocked, scowling with a ferocity only ever seen in Amon Amarth promo photos. Actually, it's like Road House, man. It's Road House and I'm Dalton without the winged-out perm.

I stand and I wait for someone to act a fool. It'll happen; it always does.

That's when I utter my Eastwoodesque catchphrase:

911, where do YOU need assistance?

(DISCLOSURE: I may be eating and have just taken a rather large bite of a chicken gyro or empanada at the moment the ball drops. It's really hard to get the words out if your mouth is full, you know? Besides, my partner is there to back me up when…well unless we're both eating at the same time. You know what? Disregard.)

That's right folks, I am one of the sometimes disillusioned yet endlessly friendly 911 dispatchers, and I am here to share some highlights for those who have always wanted to….go behind the mouthpiece.

How about find out what's coming in my ear.

We'll leave it at hear all about the goofball loons that keep us employed.

Today, I'm going to take you inside a dispatch center and give you an all-access pass into the world of talking weirdos out of doing dumb shit.

Today folks, I put down the Grand Theft Auto V that I have all too often coped with on those dark and painfully annoying nights. Today is the day I face the dial tone, and come clean.

First and foremost, 98% (I'd check the stats for sure, but close enough) of the calls that come in are completely inane asshole bullshit.

The other 2%, while serious in nature, are often times called in by frequent flying mouth breathers who couldn't learn a lesson if the booze they swilled was literally filled with zip files of Asimov books.

In keeping with #2, there are far too many goofs that think if something big is going on right by the police station, a tac squad can be on scene faster than a wet fart hits the nose. They call back after 2 or 3 minutes: Where the hell are cops?? It's right behind the station!

I want to detail to them how these little black and white vehicles that they get into at the start of shift take them to places that are not inside the station. They do this crazy thing that has oftentimes been referred to as patrolling, and don't just convene in some non-existent holding room with their guns drawn and dicks hard, waiting for decency to be compromised.

It's like this: when I go to a ballgame and want a beer, am I more or less likely to get one if I go into the bowels of the stadium and stand by a locked cooler? I say less. Why is that? Because while I'm getting severe dry mouth over here, all the vendors are walking around the stands selling the fucking beer!

There is a definite ideology of status among callers depending on the type of town they live in. I've worked at smaller agencies as well as a multi-jurisdictional conglomerate, and there has always been at least one sleepy little nothing town with obnoxious mini-mansions, earthy dog grooming shops, and new age yoga studios. All of them filled with entitled twats who love to tell you how goddamn important they are; especially when reporting horseshit.

Now, if a person is in a serious bind, man I don't care who they are, I'm all in on getting them help ASAP. But when Mickey Moneybags ties up a 911 line to bitch and crow about kids playing soccer in a park, I struggle. Likewise, when the same old bat calls every day puking on about the 15 cars double parked in front of a school at 3 in the motherfuckin' afternoon, the struggle is very real.

They also love to tell you who they are and what they do before they begin their assholic dissertation.

Um, yes, this is the renowned Dr. Orenthal F. Bobnweave, the Pacific Northwest's top-rated proctologist in 2010 and 2013. I want to know WHY there's a beat-up heap of a van in front of my neighbor's house!

Yeah Doc, just like we tell you every week, it's the HVAC guy that comes by to fellate your neighbor's pet orangutan. We don't come out for that kind of thing.

Yes, I'm a lawyer and there is a tree limb with a leaf hanging so low it nearly grazed my Organza Yarn hat as I pass by…

All I want is this:

Yeah, I shovel cowshit for a living, and there are two old codgers in the lot of the wrinkle ranch fucking to beat the band in the back of a pinto!

We'll be right there, good sir.

Not everyone answers the phone like I do. Many ask where the emergency is, which is pretty much the same.

Well, it's not really an emergency, but….

It is unfathomable the amount of people that call 911 and the first thing out of their sewer is that wretched statement.

You know, I grew up in a major city, and it was so well known not to ever call 911 unless your balls were literally on fire, that it wasn't even taught. Believe it or not, every department in America has a 7-digit non-emergency number specifically designed for stray shitzus and jackoffs who lock their car keys in the trunk.

The funny thing is, even back in the archaic 1990's, we had the wherewithal to find the local number. We'd break out those beastly yellow pages and cycle through it until we found the right department and proper district. And then BAM! into the number 10 save bank on the old cordless house phone it went. Ours was usually right after Grandma Annie's number.

These jamoches today will follow up the not really an emergency with but I didn't know the number to non-emergency. I guess that's supposed to be some kind of pseudo-apology intended to make up for their bombastic level of laziness? Meanwhile, these pricks are on iPhones and Galaxies.

There are a whole hell of a lot of yahoos that think since they once watched a season of NCIS: Los Angeles it automatically authorizes them to communicate with some BS Hollywood cop speak.

Ahem…ok then. Is anyone hurt?

What? Just get a cruiser over here!

The elderly call A LOT. But you know what? That's fine. There are few if any that don't have a soft spot for old folks.

The list could extend on and on, because every day at least two or three genuinely special members of society just have to call and say hi. I guess I ought to thank them though. After all, they keep me employed and give me endless fodder. We have a lot of fun and kid in this field, but we do care about the folks that call. Sometimes you just need to vent some. Gotta go….phone's ringing.

Soldier 1: The rockets red glare looked cool. But I messed up the bombs and they just started bursting in air.
Soldier 2: Don’t worry about it. Doubt anyone noticed.