The Wrath of the Knitting Needle

The Parks household was rife with sibling warfare. The marathon battles raged daily between me and my nemesis/brother, Christopher, aka, Sistopher. I was a short, transparently white child. At 4'8" I was so alabaster in color that you could see my veins through my pasty flesh. Sistopher, on the other hand, was a blubbery lummox of a man-boy who sprouted into a freakily early puberty that caused him to grow to his full height, 6′ 2", in the 5th grade. His body odor was so repulsively pungent it would fill up our father's van and he had to be coated in a layer of Arrid Extra Dry before entrance into the van was permitted. 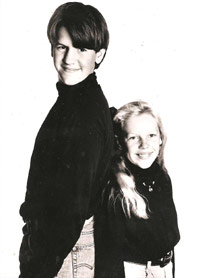 Sistopher and Alli: Evil vs. EvilIn strength (and stench) I was completely outmatched, but I had perfected the art of the booby trap, as well as the art of throwing blunt objects (snorkeling masks, croquet balls, soccer trophies) at his face and running into my room and locking the door. I also liked to cut my nails into points and wait patiently for him to beach himself by the pool. When he'd develop a crispy sunburn, I'd spring forth from a nearby bush and tear away his flesh with my claws. Then, of course, dart into my room with rabbit-like speed before his lumbering ass could catch me.

One day, after a savage beating that left giant purple bruises all over my tiny, transparent being, I knew he had to pay. And pay he would. I would construct the most vicious of booby traps—something even the Vietcong would envy. I would take that fat bastard down…hard.

A few steps later I heard the frantic scream I had been waiting for…I was off to my room to look for tools. Shove a Skipper doll up his ass while sleeping? No, I couldn't get near those chubby mountains, plus I think this was during his "wiping is a waste of time" phase. The oldie but goodie, Ex-Lax brownie? His lard ass could certainly use the weight loss, but no, the discomfort of diarrhea wasn't enough—he needed to feel serious pain. Then I found my weapon of choice in the closet: a knitting needle (which was strange because nobody in the family knitted). I bent the knitting needle into an L shape, fished it into the carpet in the entryway to his bedroom with the point sticking up, and draped one of his pit-stained double XL NASCAR tees over it. Surely he wouldn't notice the giant point amid all of the filth.

I scurried off to my room across the hall, got under the covers, and joyously anticipated his bloodcurdling wails of agony as the needle penetrated his portly flipper. As the rattles of his giant footsteps began ascending the stairs, I couldn't wait! When he reached the top of the stairs, I was ready to burst with joy. A few more lumbering steps…. and silence. He'd made it past the trap, and I heard a rustling, a fart, silence, and then a snore. Dammit! The fatty had stepped over the needle and into the safety of his Transformers-themed bedroom. 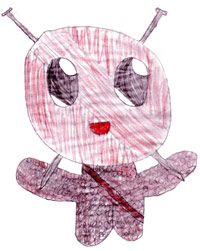 Beware the Knitting Kneedle Kninjas, the modern incarnation of the KKK.Then, suddenly, the parental unit's door opened. A few steps later I heard the frantic scream I had been waiting for, only, much to my horror, it was coming from mother, not brother. The knitting needle had pierced the bottom of her right foot and jutted out the side. Later she would recount the incident as, "I though I was hit by a stray bullet." Mother pulled her foot off the needle, blood spewing out both the point of entry and exit, and hobbled into her bed. Father and Sistopher quickly ran to her rescue. I, on the other hand was absolutely terrified of the punishment that would ensue, and sheepishly shimmied beneath the covers.

Surprisingly, nobody came in to scold me. This made me even more nervous. I lay awake most of the night terrified of what trouble morning would bring. But, morning came, I went off to school, and still nobody scolded me.

Years later Mother would say, "I didn't say anything because I didn't know what to say. It was so diabolical, I was afraid of you." Plus, I think she knew in her heart of hearts that Chris did indeed deserve the needle's wrath. And although he wasn't injured by the needle, my unrequited attack wasn't completely without purpose: Sistopher feared my chilling 8-year-old capacity for evil and didn't beat me for nearly three weeks.

Related
Hi There, Could You Please Fill Out My Survey?
Joe Murphy
Human Sunbathing Explained to the Aliens
Luke Roloff
How to Get Motivated to Write: Best Tips That Help
Mark Mullis
Resources

An Oral History of Your Conception
Devin Wallace
Yes, I Totally Read, I Love Books, Here Are All the Books I’ve Read
Max Kerwien
An Unfortunate Announcement Regarding Citizenship Downsizing
Jake Bettermann
MasterClass: Acting with the Guy Who Played “Shlubby Dad” in a Domino’s Commercial
Gracie Kairis