The Colletti Clingers: Men Unable to Be Single

In the dating landscape there exists an anxious, needy being who desperately roams among us.  And I'm not talking about clams.  This creature is called the Colletti Clinger.  Named after Stephen Colletti from MTV's reality soap about fartface teens, Laguna Beach, the Colletti Clinger is a male who cannot be single, not even for a day.  Notice how Stephen Colletti nervously clings to Lauren Conrad when his true love, Kristen, blows him off to deliver congratulatory rim jobs to the baseball team.  See the sheer terror in Steven's eyes when Lauren finds a real boyfriend, thus leaving him without a "backburner hoe." 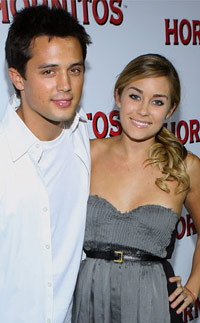 Welcome to the Self-Esteem Booster Club! Fictional Colletti Clingers include Jerry Maguire, from Jerry Maguire, and Pepé Le Pew, the rapist cartoon skunk of yesteryear—although Pepé Le Pew isn't a great example because he never gets the cat poon and CC's always get the poon.

The CC is a handsome specimen; how else could he have a girlfriend at all times?  This may confuse psychologists like myself who study the CC's behavior.  Since he's good looking, can't he just acquire a steady stream of poon without the burden of a sassy clam?  Isn't that the male ideal?  Yes, but the CC does not want random clams, he wants constant approval like a damn dirty dog.

The CC was a beautiful child.  During his formative years he had no problem finding a girlfriend along with many hopeful runner-ups.  The CC became dependent upon this unvarying level of admiration.  His first girlfriend was in middle school, a desperate mini-skank who would do anything to keep his approval.  As the CC blossomed into manhood he continued to have a steady stream of girlfriends.  Now that he is full grown, he has never known the single life and fears it more than Amy Winehouse's sweaty moose knuckle on a humid summer day.

The Colletti Clinger always tells the backburner hoe that things aren't serious with his girlfriend. When the unsuspecting clam encounters this seemingly too-good-to-be-true hunk, she thinks to herself, "Wow!  He's handsome and he wants to be bf/gf right away… what a catch!"  Then when the relationship withers under the weight of his narcissism, the girlfriend, like a normal human, will retreat to mourn, weep, hire a PI to track his every move, lay in the fetal position and listen to Ace of Base.  The CC, however, will have a new girlfriend in a matter of days, and the GF will wonder, "How did he find her so fast?"

All of this dating around is okay for a spry young CC, but as the CC approaches 30 he longs for marriage.  The CC sees 30 as a ticking time bomb; he must drag a clam down the aisle before the stroke of midnight on his 30th birthday.  Once married, the CC feels safe and secure.  He will no longer have to suffer those momentary flashes of singleness that terrorized this youth.

Life as a wife to the CC will be a long, draining one.  He will be the star of the relationship and she will play second fiddle.  The CC will eat the wife's soul and, unlike the statistical average, she will end up kicking the bucket before the CC.  At her funeral the CC will blissfully absorb all of the delicious sympathy he receives.  Now, for the first time ever, the CC is alone.  Having been spoon fed his entire life, he is rendered helpless.  Unable to care for himself, at 65 (the absolute minimum age), he enters the rest home and becomes the object of desire for a gaggle of adoring grannies.

The CC really can't help himself.  When all you've known is love and worship, it's hard to live a lonesome singleton's lifestyle.  A whore won't hold your hand on a rainy day, unless there's an 8 ball and a simmering new clit ring in it.

So I urge you, if there's a special CC in your life, please show this to him and make him feel ashamed of his needy ways.

Related
Please Familiarize Yourself with Mr. Satan’s Views Before Calling Yourself a “Devil’s Advocate”
Fleurette Modica
Hi There, Could You Please Fill Out My Survey?
Joe Murphy
Human Sunbathing Explained to the Aliens
Luke Roloff
Resources