The Wind in My Sales

Selling things is difficult, but if you can stand it, sales pays handsomely.

When I look at salespeople, I see guys that may never be elected to the Rock & Roll Hall of Fame, but at least they'll have a comfortable retirement. Even with the expenses associated with a mid-life crisis (mostly sports cars and coke for snorting off hookers' chests), salesmen usually wind up with visitation rights to their kids and a hot younger girlfriend, provided they don't go bald. I can accept that deal.

Marketers know that deception works better than having decent products and skilled salesmen. Regular readers of my column will know that I tend to buy into most stereotypes. For example: All people from foreign countries wear bones through their noses and eat human flesh. Also: All midgets are extra-ticklish experts at chocolate-making. The same is true about salesmen. They're all phony, backslapping buffoons, who talk about nothing but golf and which secretary has the nicest ass.

I worry that a sales job could turn anybody, including me, into that guy. If that ever happens, you have my explicit permission to put a bullet in my brain. The bottom line is, selling things is difficult, and it eats away at your soul like John Madden with a big bag of Doritos. But, if you can stand it, sales pays handsomely. There will always be gullible idiots with too much disposable income.

Salesmanship used to be a valuable skill. If you were good enough, you could make a living selling literally nothing. Does anyone remember Amway? For a thinly-disguised cult, those guys had ambition. They tricked an entire generation of morons into selling hallucinations of free money to one another.

In terms of dignity, retail sales are only a small step up from pyramid schemes. The poor schlubs who have to fold sweaters, and flatter delusional customers, they're the ones who really deserve our pity. Their sad, dead eyes always seem to be counting down the minutes until they can take lunch in the food court. 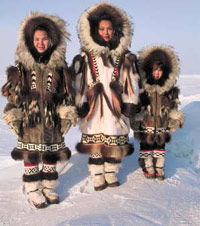 I told you that was some good ice! Come back for our “Annual Winter Sale” next week!Big-ticket retail items are another story. Appliance stores were once places where the naïve and the suggestible feared to tread. Even savvy, well-informed consumers stood every chance of walking out with a refrigerator made entirely out of compressed sawdust. Sales guys were just that good.

You see, back when technology was new and scary, people had to be convinced that they needed it, and salesmen were compensated accordingly. So, some guy's income depended on whether or not you bought a computer from him. These days, if you need something, good luck finding someone motivated enough to care. And if there is a salesman, his pitch will probably consist of pointing to things on the box and grunting.

I remember the first time my dad brought home a computer, something called a Mac Plus. Of course, electronics in those days were mandated to be enormous, inefficient status symbols. Technologically speaking, it wasn't that different from the woolly-mammoth dishwasher the Flintstones enjoyed.

Moreover, electronic devices tend to explode like the Death Star when my father so much as breathes on them. Yet some computer store hypnotist must have tricked him into the purchase. The pitch was apparently so compelling that my dad was genuinely surprised when our Mac Plus didn't levitate and cook dinner with its tractor beam.

Today, your salesperson is a pimply 17-year-old whose only emotional investment in your purchase is how quickly he can get rid of you, so he can get back to playing PSP on the store's demo models. Without commission to think about, his goal for the day is to reach level 29 of Shrek Smash ‘N' Crash Racing before Chad from shipping.

The only way these sales delinquents get reprimanded is if they're caught not asking customers to help find something. And, if you think about it, this policy is kind of insulting now that most big stores place every single item for sale under a giant sign with its name, and a happy face on it.

Telemarketers are equally guilty of not caring. The first time I got called by a telemarketer, I wanted to rip his head off, naturally, but I also kind of respected the difficulty of his job. He was pushy, and probably an inmate at the local prison, but he also seemed really concerned that I was paying too much for long distance. Eventually, he was replaced by a bored housewife reading from a script in a monotone.

Actually, the human element is disappearing completely. The people in charge of selling fake precious metals and time-share programs have figured out that god damn robots are more efficient salespeople. That's why everyone in my area code receives messages in thick accents, asking to call a certain number on behalf of [unintelligible]. It's not a sales pitch, it's more like 2 minutes of telephonic rape.

Marketers know that deception works better than having decent products and skilled salesmen. So, I get an email every few hours urging me to improve health with FREE Trial of Colon Aid!!!!1! There's no pitch, contact information, or even a coupon attached. I know the internet community can't be that concerned about my colon; it's just reached the point where companies would rather annoy us than sell us something.

Spam really can't be called a viable sales technique, though. If it were, all the aisles would be labeled "Free Viagra," and screaming employees would leap directly into your path as soon as you entered the store. Everyone hates telemarketers, but at least you can yell at them if you want to. Spammers are anonymous assholes who deserve to be buried alive in the diapers of worm-infested gorillas.

I'm not saying I'm ever going to like salespeople, but I do miss the days when I could fuck with them instead of the other way around. For example, I could pretend to be an internet millionaire toying with the idea of buying a dozen wide-screen TVs for the trampoline room in my loft. Meanwhile, the sales guy would practically suck my left nut to close this imaginary sale. I guess what goes around, comes around. Modern salesman can't be bothered to sell you a dozen donuts, let alone TVs.

Now that I have some disposable income of my own, I guess I'm just looking for the right Nigerian scammer to send my bank account number to. When the kid at Circuit City starts caring as much as the deposed Prince Otumba, I'll be willing to play ball.

No body part, with the possible exception of the dong, has inspired as many new vocabulary entries as the breasts. I could fill pages with all the slang names for them. But what of the woman behind (or, in some cases, above) the breasts?

Let's face it, boobs are wonderful things, but in many cases, a rack has a shelf life, so to speak. Once a certain age and/or weight is reached, those things are a droopy liability. And the one who wields them is a flopulon. This new word was coined by someone who thinks you can add pseudo-Latin suffixes to mildly sexist roots to create pure hilarity. It doesn't always work, but flopulon seems to have staying power (unlike the floppy hooters themselves).

I think D.A.R.E. would have been more effective if it were called Double Dog D.A.R.E.