Chances are you have a birthday. And as you get older, the menu may change from cake to booze to booze-soaked cake, but it's always a special occasion. Every year, we celebrate the day we ended the lease on our mother's womb and got a bigger place. And man, that move was a doozy. So it's no wonder we want to commemorate it. 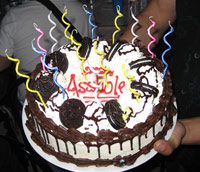 You are what you eat.But is there anything intrinsically important about birthdays, or is humanity just wanking its own ego with candles and funny hats? Someday, aliens are going to pay us a visit, and if they're not already cloned to be indestructible space lizards, they'll probably reproduce via osmosis. Needless to say, they won't understand why we celebrate a process that was filled with pain and placenta juice.

If there are any kids in your life, at least ones you know about, you'll better understand why our society puts so much importance on birthdays. Aside from the presents, and (if you're lucky enough to be Mexican) piñatas, the main benefit of having a birthday is the right to act like an entitled asshole. It's my theory that this behavior doesn't really change over time.

A Bar Mitzvah boy may be a pimply teenager, but on his birthday, he gets to dance with girls, and sneak liquor from the open bar. Between the ages of 5 and 10, kids think that they are King Shit in charge of everything for one day a year. No matter how capricious the royal proclamation might be, a little birthday Caligula can always back it up with unassailable logic. "I wanna Spongebob cake made entirely out of frosting! Because it's *my* birthday!"

I have known children to make exorbitant demands on those around them, simply because the number of days they have existed is a multiple of 365. If the birthday boy or girl isn't given the biggest slice of pizza, the most elaborate balloon animal or the first chance at pinning the tail on the donkey, heads are going to fucking roll.

I've been to more than one kid's party at a little nightmare someone dreamt up and called Chuck E. Cheese. Generally, I am opposed to trusting animatronic mice with society's pizza and fun. Yet, as much as I object to musical robodeath, I will admit that the best way to deal with petulant birthday kids is to distract them, preferably via immersion in a giant pit of multicolored balls. If that doesn't work, the Skee-ball machine doesn't care whose birthday it is either.

When kids get a little older, the trappings may change, but birthdays are still all about showing your friends who's the alpha dog. There are Bar Mitzvahs, elaborate parties to mark a Jewish boy's ascension to manhood. This apparently takes place at 13 years old. And just in case you're wondering, this isn't some kind of molestation loophole; state age-of-consent laws still apply, perverts.

A typical Bar Mitzvah boy may be a pimply teenager in a bad suit, but on that day, he gets to dance with girls who matured twice as fast as he did, and try to sneak liquor from the open bar. Plus, he gets a shit-load of fabulous cash and prizes. And, trust me, he sees this as a god-given right, handed down to Moses himself, or possibly Tony Hawk.

I don't mean to single out the Jews, though. The Sweet Sixteen Party is a whitebread tradition as old as badminton or secretive abortions. These huge affairs are great for the catering industry, but probably don't seem all that cool to the starving citizens of Somalia. I bet a lot of whining goes into every aspect; from the duck liver canapés to the personalized tiaras. I'm not, technically, an underage WASP girl, so I don't know firsthand.

During the tumultuous years that follow, birthday expectations remain high for young adults. Actually, like every other part of life at this stage, birthdays are really about sex. Being taken to your first strip club on the day you turn 18 is a rite of passage that's a hell of a lot more pleasant than, say, being sent to fight a wolf in Sparta.

In actual adulthood, your birthday demands can no longer be satisfied in terms of party favors, or sexual favors.And the first time you hit a birthday whilst in a relationship, basically anything you ask your partner to do is fair game. In other words, your girlfriend wouldn't normally let you film her giving you a blowjob with a mouth full of pudding, but on your birthday, it's not like she has a choice. This is how the male mind operates one day a year, and you can see, it's not really that different from the kid who wanted a cake made of frosting.

Historically, I've been more concerned with presents than with padding my sexual resume. I know it's not exactly gracious, but I have very high expectations for gifts. I wanted my girlfriends to pick out something that proves they're in touch with the stuff I like. No gift cards, and no checks for $25, because I already get one of those from my parents every year.

I can't even drop any hints for fear of tainting the results of this demented experiment. This year, after weeks of threatening to buy me underwear and socks, my better half came through magnificently with books, DVDs and videogames—a veritable smorgasbord of distraction from the dreariness of being in a relationship in the first place. My underwear still has holes, but it's so hard to care when you're playing Grand Theft Auto.

As an adult, most of your friends will have a job, and some might have a mortgage, whatever that is. So, it's not a given that anyone will be able to acknowledge your birthday beyond a two-word greeting on your Facebook wall that will probably be misspelled. It used to be a sacred duty to get a buddy trashed on his birthday, but eventually, you start counting the number of people, not the number of drinks or vomit stains.

My own birthday passed recently, and I hate to admit it, but as my planned bar-trip grew nearer, I got more paranoid than a squirrel on crack. What if no one showed up? What if they did show up, but didn't acknowledge my birthday? What if they got me crappy novelty drinks? I'm too old to drink anything that rhymes, or has a color in its name.

Thankfully, I had an OK turnout and a good time. As it turns out, the best cure for paranoia is lots of vodka. I wish I had known that during my Bar Mitzvah, or the Smurfday party my parents threw for me when I was 5. I tried not to be too much of a birthday asshole. But when megalomania is socially acceptable one day per year, you need to make the most of it.

One day, while walking in a fairly religious neighborhood, a couple of bearded fellows in snappy hats approached me (and my friend) and asked if I was Jewish. I replied in the affirmative, not knowing what I was about to be subjected to. Unbeknownst to us, we had ventured out during a holiday where God's chosen people are asked to say a prayer over a date palm frond and a citron (which is a kind of citrus fruit).

These religious fellows were just trying to do a good deed by saying the prayer with me. Of course, they had no way of knowing that I was more interested in procuring a bacon double-cheeseburger than in saying prayers over obscure fruits. But I digress.

Somewhere in the back of my brain, I knew what this crazy ritual was all about, but it was all new to my buddy. So, as I went through the motions, I tried to put myself in his shoes. Needless to say, he was amused by the sight of his friend repeating Ancient Hebrew while shaking some exotic flora. Which is a polite way of saying he was doing everything in his power not to point and laugh.

Every year since then, he asks me if I've remembered to shake the jewlemon, which is not nearly as wrong as it sounds. It might be a stretch to call this an essential word, but if you ever find yourself in a similar situation, at least you'll have a point of reference.