If Men Had Purses

Let's imagine for a second, that purses on guys were all right. Pretend that it was socially acceptable for all people to openly walk around with pocketbooks and handbags, and that a guy who carried one wouldn't be taunted or teased. What do you think men would keep in their purses?

If it was up to me, a guy would carry two purses: one for all his shit, and another for condoms.In my opinion, carrying a purse is the most helpful thing ever. Aside from being a great way for old women to defend against robbers, purses are remarkably practical. It's as if your pockets got increasingly bigger, zipped closed, and came with a useful carrying strap. Yet even though purses are one of the most convenient tools in the social world, men aren't allowed to have them. Even worse is that while guys are forced to shove everything into their pockets, girls are wasting the precious space they've been granted by stuffing it with garbage. It's depressing to see a girl carrying a large, spacious handbag, only to see her litter it with makeup, perfumes, and gel pens. I've seen girls carry around purses with other purses inside them! Do these girls realize the opportunities they're wasting?

Seeing women abuse such space with their handbags made me think about what men would do if they were granted purses. When guys go outside they have shit to bring too (wallet, car keys, phone/iPod, drugs, etc.), and they manage to smash all those things into their pockets. So what do you think they would keep in the extra space of their man purse (murse)? I have compiled a list of things I would definitely carry at all times. 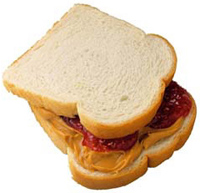 No doubt, first thing I would stuff into my murse would be food. I already carry food around without a purse, so having a place to store it would only increase my load. And not just mints and gum and shit like that; my purse would be stuffed with beef jerky and fast food burgers. It really frustrates me when girls choose to clog their purses with tampons, lip gloss, and hand sanitizer instead of things needed for physical survival.

Peanut butter and jelly sandwiches are perfect. The simplicity of this childhood snack brings back the greatest memories. The combination of smooth peanut butter and refreshing jelly not only teases your tongue, but it sticks to your lungs and fills you up. With PB&Js in our murses, no man would ever go hungry again. 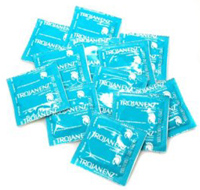 If it was up to me, a guy would carry two purses: one for all his shit, and another for condoms. Typically, every guy keeps a condom in his wallet, but the abuse they take in your back pocket has led to countless pregnancies. Condoms should be kept in a spacious, cool spot where they won't get abused or torn. So when a woman asks, "Do you have a condom?" the common answer should be, "Don't you have any in that spacious, unruffled, condom-storing bag?!" With a purse, dozens of condoms could be properly stored in the cool space, and blue balls would become virtually extinct. 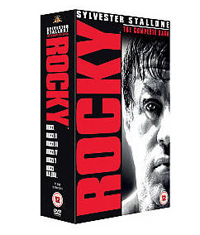 Unarguably, hands down, the Rocky series is one of the most inspirational movie collections of all time. And if men had any opportunity to carry these movies around with them wherever they went, they would jump on it. Hell, with a big enough purse you could even hold a portable DVD player and have a mobile movie theater. Here are two situations based on two people: the first is a girl with her purse, the second is a guy with his.

Person: So what do you want to do?
Girl: I don't know, I have gum in my purse…

Person: So what do you want to do?
Guy: Wanna watch Rocky?
Person: You have the fucking Rocky movies?!
Guy: Yeah, right here in my purse. 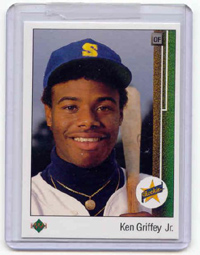 Or any baseball card for that matter. With all the extra space, baseball cards would be become cool again. Only instead of keeping them in a Ninja Turtles lunchbox like you did when you were a kid, you would toss them in your purse. There are attics full of old comic books and baseball cards waiting to be enjoyed by men who simply have nowhere to carry them. If nothing else, each man could keep his favorite card in his handbag, ready to whip out and compare with other guys'.

Security is always a man's number three priority (behind vaginas and meeting Christopher Walken), we just never know how to handle it. Every night a man faces the danger of conflict—a gamble they could lose at any moment. A purse would be a perfect way to properly store a handgun in case of emergencies; it would also stop assholes from starting shit. With everyone carrying a murse, anyone could be carrying a gun. This stand-off would keep things peaceful for fear of disaster. Of course, the second one man set off a round at a local bar for someone hitting on his girl, the entire town would become the Wild West.

So now that you know what I would keep in my man purse, think about what you would store in yours. For far too long women have abused the convenience of handbags, and we need to show them what they're missing. Everyone's purse could become a collection of unique things they use to enrich their life. What would you keep in your purse?