The Worst of Yahoo Answers

Perhaps the greatest benefit of the internet is its vast amount of information. With a few distinct word choices, your computer can become a faucet of knowledge ready to quench your thirst for wisdom. Yet even with all these advanced search engines available, it seems people are still unable to answer their simplest questions.

This, my friends, is why we have Yahoo Answers. Never has one website represented the idiocracy of American culture so perfectly, creating a veritable petri dish of misinformation and morons who don't know when to keep their mouths shut. Below are some of the most ridiculous questions I found on Yahoo Answers.

I'm not going to judge people for their fetishes. For some it's ropes; others get a kick out of midgets. Granted, beating off to Disney for your first time is a little creepy—just use Facebook pictures like the rest of us, you asshole—but we can't hold that against him. Maybe he's got himself a legitimate fetish. After all, have you seen Jazmin in Aladdin? That bitch was asking for a squirtin'!

This kid accidentally walked in on his parents fucking to The Little Mermaid and can no longer look at Disney Princesses again.

Ouch, this guy has clearly fallen victim to "reading too deep into a Colgate Whitening ad." Anyone with a 5th grade education knows the basic outline of cancer prevention: donate to bald kids, wear a bracelet, and walk for three days. Believing a toothbrush could help you is just embarrassing. Sorry, bro.

The Oral-B Sonic Clean: now with rotating action to reach cancer that other brushes can't!

Again with the weird fetishes. My younger sister owns a lot of stuffed animals, but I've never thought of them in that way, you know? But this kid does ask a controversial question: What if you humped a stuffed animal? What could happen?

My sister's animals are specifically arranged on her bed, propped up like a family portrait around her pillows. I'm imagining that if these stuffed toys and I were to ever "hump," they would hardly take their pants off. So what skanky ass animal is this girl humping? Is she rubbing her junk with filthy stuffed animals from a Dairy Queen dumpster?

Only if the stuffed animal was a present from Tara Reid.

Leave it to the American people to turn an infectious disease into the latest weight loss scam. First it was TrimSpa, then bulimia, and now the H1N1 virus. Hoping that swine flu will "do the trick" to lose a quick forty is like saying Russian roulette will cure that nasty headache you've been having. How lazy do you have to be to prefer catching a deadly virus over going for a run? How ‘bout taking the money you would've spent on a plane ticket to Mexico and investing it in a gym membership, you douche.

What? Are you serious? I'm not so much angry at this guy's question as I am the way he interrogates the shit out of you. Why the fuck are you asking these questions? And most importantly, how the hell do you not know what the Civil War started over? Clearly we all know it began when Rasputin beat Hitler at Halo during the Olympics, and they all fought in the coliseum until rap music came out.

The Civil War was a battle between the North and South states, and the reason we all like Abe Lincoln.

Here we have a typical Bruce Wayne sick and tired of the havoc terrorizing his precious Gotham. But instead of turning to the logical idea of a charity or fundraiser like those pussy-ass hippies, he has decided to take justice into his own hands. Watch out Lex Luthor, he doesn't need shit like Spidey senses or x-ray vision, this pubescent fuck has a brown belt!

And when it comes to vigilantism, you need way more than a bulletproof vest. Have you seen The Dark Knight? That fucker had a tank that turned into a motorcycle that turned into a submarine and he still lost to a pill-popping Heath Ledger. All I know is that if we find a 14-year-old kid with a vest and a broomstick dead in an alley, we know the cause.

Rocket to Earth after your home planet of Krypton explodes; have laser vision, super strength, and the inability to undress outside a phone booth; and an allergy to Kryptonite.

This, my friends, is called a Good Question. The answer can be broken down to a simple proof. First, do vampires get STDs? Assuming they've lived for 900 years off of hooker blood and roadkill, we can be pretty sure Edward Cullen was contaminated with, at the least, a hybrid of cancer-AIDS, the Black Plague, and malaria. Second, what are the symptoms of these mutated infections? I can't fathom the biological deprecation of your immune system after centuries of unprotected blood swallowing, aside from your privates resembling a bountiful cauliflower field.

I hate how this Twilight uproar has ruined the badass reputation vampires used to have. Normally, the only way you could kill a vampire was by stabbing a streak through his heart, otherwise he would suck your blood and then vanish into a bat. If, hypothetically, he did have an STD, it would no doubt include his ballsack growing a pair of wings.

Given that vampires skip the feeble idea of condoms (or sex) and just get right into intravenous sucking, I would say that most vampires have a collection of herpes, syphilis, and Super AIDS. 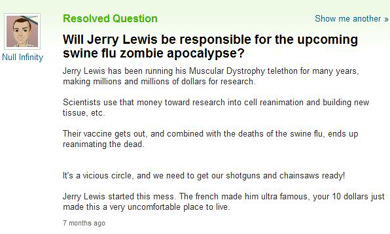 ….What?? Are you accusing Jerry Lewis—the American comedian and part-time Jabba the Hutt impersonator—of starting a zombie apocalypse through his Muscular Dystrophy? That's like accusing Chuck Norris of starting the nuclear holocaust through the Total Gym.