Okay Mac, Stop Being an Asshole

Okay Mac, we get it: you're the best computer known to the universe. Your technology has overpowered other operating systems to the point where they kiss your Intel Core 2 Duo processor. As your advanced hardware slowly turns into a culture trend, none of America can escape your power over the modern technologists. But Mac, I just have one problem with your whole plan to take over the digital world: you're being a jerk.

Just because you're the best computer in the world doesn't mean you have to be such an asshole. We know you're brothers with the iPod and iPhone, but that gives you no right to shit on all the other operating systems. The power's gone to your head, man. Now all you do is make fun of the computers through your advertisements by rubbing your popularity in their face. That's grade-school-recess immature, bro.

I realize that you have revolutionized the technological world and given a spark of hope to the hipsters who infest this world, and that's cool. And the fact that your monitors are massive, sleek, and white? Radically stylish; you're a digital Zoolander. But that doesn't mean PC users are frittering old men in suits developing carpel tunnel in their cubicle—they can be cool kids too. 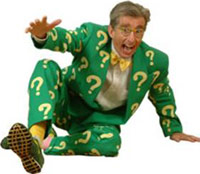 I assume by now you know that I'm referring to your commercials. I still watch TV—thanks to Hulu—where I am entertained not only by shows, but fascinating commercials advertising the most exotic products. Within one three-minute commercial break, I have been urged to buy items ranging from legal counseling to zebra-colored blankets with sleeves. It is during these advertisements that relationships are made with the public; from the hooker-beating ShamWow Guy to that question mark lunatic who would yell at us how to get "free money from the United States Government!!" And it is within these affiliations of characters dividing our late night dramas that you have abused your power. Instead of utilizing your 30-second portion of advertising to build a relationship with your audience, you have used it to insult a foe.

I ask you, Mac, why did you ruin this relationship by misusing your privileged commercial times to embarrass your fellow PC?Oh, believe me, your commercials started out fine. You had a cute, adorable Justin Long, fresh from the set of Dodgeball and Accepted, standing in stylish jeans and a button up. Beside him, a slightly balding older man dressed in a brown suit with glasses. They are in front of a plain white background. Cool, it's simple, I like it. And then you introduced the infamous phrase:

And then the two characters, each personifying an opposing computer, would banter on screen about whose operating system is better. In the beginning, you and PC each had equal talking time, going back and forth about who owns the more reliable system. But in the end, since you paid for the commercial, you were allowed to win the repartee and have Justin Long outwit this clumsy old man. He's so "square," isn't he? What a n00b, right? Yeah Mac, you're the man.

But come on, dude, I think you've taken it too far. Over the series of commercials you and PC had, I think you started to really rag on him. The relationship between you guys heavily compared to that of a modern teen drama television series, rivaling that of Seinfeld and Happy Days. So I ask you, Mac, why did you ruin this relationship by misusing your privileged commercial times to embarrass your fellow PC?

I'll tell you why, man. It's because all this popularity has gone to your head. Okay, I understand that you appear more hip to the masses of anti-mainstream urban culture that will—terrifyingly—one day run this world. But that doesn't mean you have to tease PC and embarrass him in front of the entire world! The new commercials are just distasteful. You just have him run his mouth and perplex himself through his own unreliability. Right? Admit it, you've been kind of a dick. You hardly even talk in the commercials anymore! Just because you start with the same introduction doesn't keep them innocent:

See? That's you in the past, a humbled Mac simply trying to help out his sick friend. You offer him a tissue, how kind! It's not your fault Macs don't get these viruses, am I right? You just continue being you, Mac.

Oh, look at this, how nice. You and PC are holding hands, a friendly gesture showing that the two of you are more than compatible—no homo, of course. But what's this? You bring some strange Japanese hooker in here during this commercial? And you brag about how the two of you are going to finger-bang in the back later, but that PC can't because he wasn't hip enough to take a second language in college. That's not really cool man; the two of you could have double-teamed her together if you weren't such an asshole.

Whoa, what the hell? That's not cool bro, you can't just show yourself standing off to the side while your competitor shames himself. He's just trying to publicize his product, and you're going to insult him? You're supposed to be supporting your own image, not disrespecting others. This is advertising, not government politics. If you're going to make this political, I'll whip out the guillotine.

What the fuck is this? This is still a Mac commercial, right? So why is the PC guy doing all the talking; anchoring a news channel anxious to advertise its new Windows 7? But what's this? Even in the midst of a news broadcast Mac still comes out on top? What kind of degradation is this? You can't just humiliate someone like that by pretending to interrupt a fake broadcast they were giving!! And when you had the woman brag that you were "number one in customer satisfaction," why wouldn't you have just said that yourself? Oh and hahaha, I get it: when PC wants to cut the feed and jump to commercial, you remind him that this is a commercial. Hahaha, you truly are one of the funniest computer systems I've ever met, Mac. But still, I think you're being a dick.

I also hate the fact that after you encourage this mortification of a fellow rival—who, might I add, has done nothing to upset you—you display your smug little Apple icon, reminding us all that you are beyond doubt the wittiest trend to lead scenesters to a new revolution against this establishment. Oh, I get it, an apple with a chunk missing. Like Adam and Eve, get it? Are you supposed to be the temptation that spawns the knowledge of mankind throughout this earth? No, you're not. You're just a stupid operating system. And furthermore, you're an asshole.

So please Mac, listen to me. As your friend, I am asking you to stop being such a dick. People will still like your products the same, and you can still be the greatest multinational corporation to bless this galaxy. Just, tone down the bragging and humiliating of your opponents. Maybe talk a little about yourself, instead of personifying your competition and then slandering him. Understand? It's not so hard.

Thanks man, this means a lot to me. I can now continue my life of mindless television without having to see your bromance with PC slip through the drain. You guys are made for one another, you can't throw it away over frivolous things like operating systems! I hope you take this to heart, and I'm only saying this stuff because I care. I love you, man.