In what historians are calling the largest theft in art history, Lady Gaga's legendary "Synth Egg" has disappeared from the Smithsonian American Art Museum. Last seen on Sunday, the egg went missing from the poetry wing of the museum, according to authorities. The theft has left museum security baffled. 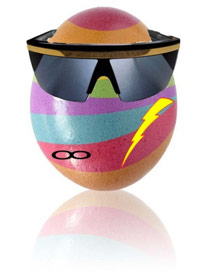 Laid by poetic prodigy and artistic revolutionist Lady Gaga in 2009, the Synth Egg was a rare birth. "I had the egg after a torrential nightmare in which I was trapped in a holographic accordion belonging to Buddha," Gaga reported to Time Magazine. "After an eternity of entrapment, I escaped the musical labyrinth and the two of us bathed in goat milk and cocaine. When I awoke, I had conceived this egg."

Given its complex origin, the egg has been valued at over £850,000,000 ($1,346,485,000) and is considered to be Gaga's greatest creation since her single "Bad Romance." Dubbed the "Synth Egg," the spawn of Gaga is rumored to contain a harmonious superhuman baptized in rhythmic excellence. But analysis of the egg has brought much speculation from scholars, many of whom claim that the biblical symbolism behind its divinity is nothing more than poorly interpreted lyrics from Gaga's "Poker Face."

Smithsonian security members were shocked Monday to find the coveted egg missing after a routine opening of the poetry wing of the museum. In place of the egg was a ransom note, reading simply, "Revelation."  Washington authorities report no evidence over the message's author, but assure Smithsonian officials that they will exhaust every lead to obtain the word's significance.

"The phrase ‘Revelation' has powerful religious undertones. It may be this thief's way of communicating an end to Gaga's art—like a musical apocalypse," says cryptologist Jay Shather.  "Or, the thief could simply be a psychotic sociopath obsessed with a shitty pop-artist."

Gaga has publicized her asexual reproduction for years, but is unsure when she will lay her next egg. After hearing about the vanishing of her art, Gaga burst into a fit of tears and menstruation, subsequently cancelling her next three world tours. In a press release she stated being "forged in the crucible of subconscious anguish."

Smithsonian officials urge anyone with information on the Synth Egg's whereabouts to contact the authorities.  Thieves face possible charges of grand theft monument and treason, along with the psychological trauma inflicted on Gaga and her disciples.  The long-awaited hatching of the egg is rumored to reveal a theatrical phenomenon described by Lady Gaga as "if Mozart fucked Cher during a Metallica concert."

Until the Synth Egg is recovered, Lady Gaga's influence on American culture will remain limited to shitty radio singles.