The Fifty Shades of Grey Matter

Proof once again that women are definitely more sexual than men.

A while back, after emailing Codie the Fifty Shades of Grey trilogy, I challenged her to a race to see who would write an article about the series first, which she of course won. I mean, come on, I've certainly made it no secret in the past that when it comes to anything related to sex, the woman should always come first. Now while I agree with Codie that these are very poorly written "books," I agree with her even more that "the spread of knowledge is integral to a growing and thriving human race." Well technically, the spread of something else is really what's integral to a growing and thriving human race, but yeah…sure…knowledge comes in at a close second. So with that in mind, here's my take on the Fifty Shades of Grey trilogy. 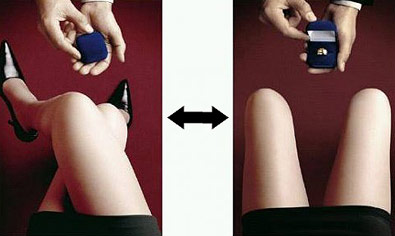 One ring to bring them all and in the darkness bind them…with rope, or maybe a silk tie.

When I first heard about this BDSM book trilogy, and more specifically how all these women were going nuts for it, of course, I immediately thought, "Well obviously that is something I simply must read." Admittedly, it took me a lot longer to finish the trilogy than I thought, mostly because each and every time the phrase "inner goddess" was mentioned I had a two-day internal debate as to why I shouldn't shoot myself in the goddamn face, thereby spraying my grey matter all over the wall, so I would never have to read those words again. That said, I still believe these are books that everyone should read* and I'll tell you why.

*Or listen to, as they are also available as audio books.

As poorly as these books are written—and I'd like to point out that even E. L. James, the author herself, has admitted that they are poorly written—it's STILL a detailed book about a girl who gets fucked six ways to Sunday and then begs for more! Exactly what about that isn't appealing to all of you naysayers?! I mean, for me personally, a book about a woman in a BDSM relationship is WAY MORE interesting and definitely higher on the reading list than compared to, oh I don't know…say, the Steve Jobs biography, which as I recall was a mind-numbingly detailed and boring account of how a computer company was run by some massive douchebag who fucked people over while acting like a total dick. Granted, there are some similarities there, but I think we can all agree that countless accounts of a woman being fucked by a giant dick are way more entertaining than countless accounts of people getting fucked over by a giant dick. 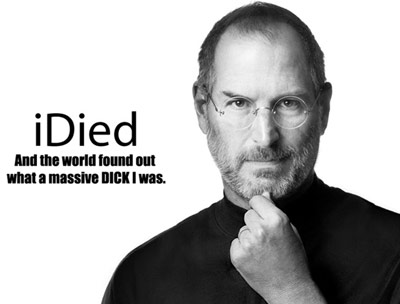 I was a fucked-up, dickish, megalomaniac, control freak, CEO with parental issues, before it was sexy.

Here's my impression of the two genders now, regarding bondage literature:

Men: (In a whiny voice) OMG this is such terrible writing! I wouldn't be caught dead reading this! I'd rather read about computer components.

I mean, if that isn't the ultimate end of the debate about which gender is the more sexual one, then I don't know what is. Here we have all these women going nuts about the quite literal ins and outs of a BDSM relationship, while the men aren't at all into it, in the least. Seriously, if I held up a sign that said "Read this book and you might have the off chance to tie up your girlfriend/wife and fuck her mercilessly as she screams out for more," you'd think there would be a line of men around the block in order to buy a copy, but nope, apparently not. Seriously guys, I've said it before and I'll say it again, some of you are a fucking embarrassment to our gender as a whole.

So my question to all the men out there is: EXACTLY WHY aren't you reading these books? A massive amount of women have gone on record and said that they love the books and would even like to try some of the things in the book with the men in their lives, and your response is that you don't want to read them "because of shitty writing"?! Give me a fucking break, would you?! Come on, that's not the real reason. At least be a man and have the balls to admit that you're actually intimidated by the idea of women being more sexual than you. You can't sell people on the idea of men being more sexual than women and then turn your nose up at the prospect of trying wildly freaky things in the sack, simply because of shitty writing. You just can't have it both ways, and unless you can come up with a better answer as to why you aren't reading these books then I have to say again… women are definitely, by far, THE MORE SEXUAL of the two genders. If you doubt that for a second, you only have to look at the sale demographics of the Fifty Shades of Grey trilogy.

Oh and one more thing…for the record, guys, if you respond with the fact that you are actually Fifty Shades of Gay, I'll accept that as a legitimate reason for not wanting to read these books. I mean, at least that would make some amount of logical sense. 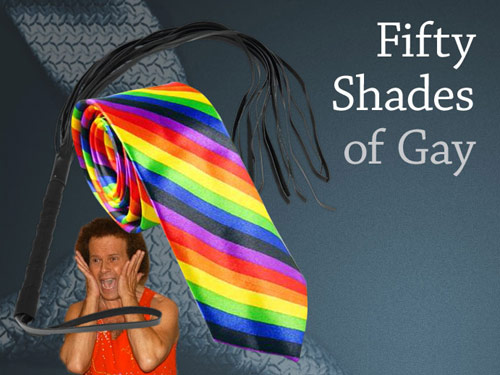 OMG! It's a detailed book about a man repeatedly tying up and fucking a woman multiple different ways! I definitely don't want to read that!