I wouldn't dare call myself an expert in creative writing. Although it's something I do daily, it feels pretentious to apply a hierarchical model to the creation of art. Words like "expert" or "professional" seem silly when applied to something as arbitrary as creativity. 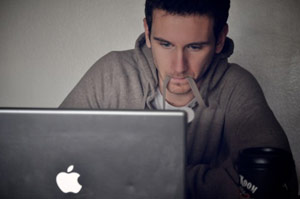 The fruits of your labor come in spurts. This is the classic writer's cop-out, deputized at Thanksgiving when you return home from whichever metropolis you have chosen to sublet a closet-sized bedroom. Family and friends ask you how the "writing thing" is going and you regurgitate the prepared statement you concocted at the airport while scanning the never-ending parade of black luggage as it spilled onto the conveyor belt at baggage claim.

You're a writer and you don't write for The New York Times, The Daily Show, or Two and a Half Men, so you will need an excuse for not achieving the non-writing public's apparent minimum requirement to be called a "real writer."

In both cases, it's generally annoying to have someone peering over your shoulder looking at your "work" before it's done. "You know what show I like? That Breaking Bad!" your functionally illiterate uncle declares. "That's a good show. You should write for them."

Thanks, Uncle Hasn't-Paid-Child-Support-In-Three-Years. When I was digging through the couch cushions looking for change to buy bologna I must have totally spaced and forgot to call Bryan Cranston to let him know I'd put together a few episodes this season and that it would be best to just make the $22,000 check out to cash for accounting reasons.

"At least it's physical," Mom might say. "My son, the professional athlete."

Related
Some of the Ways I Have Prevented George R.R. Martin From Finishing “The Winds of Winter”
Thomas Batten
How to Make Comedy Writing Story Hooks Out of People at Your Day Job
Konstantine Paradias
An Open Letter to My Agent on Why I’m Done Writing Erotica
Joe Kelly
You Can’t Judge a Book by Its Cover, Because They All Just Have the Same Colorful Blobs These Days
Simon Henriques
Resources