"Hey babe, it's me. I just checked into the motel. This place is a shit-hole."

"Hey baby, I was just thinking about you. I can't believe you're gonna be gone all week."

"Well who's gonna fuck me while you're gone?"

"You could try the pool boy." 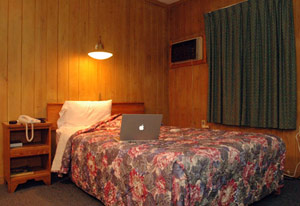 Remember: they don't wash the comforter, only the sheets…"We don't have a pool. Can't you come home early? Please?"

"Wish I could, babe, but this is business. You know that."

"Your meeting isn't until tomorrow morning, right? Come on, just do it for me."

"Oh no no no no…it's, um…I don't know…Sarah Palin getting gangbanged by midgets."

"Now that I can work with. Keep going."

"No, I'm pretty sure it was Cinderella."

"Is it the pizza I ordered?"

"No. It's the whore you ordered. Me. AND I brought pizza."

"I'm wearing these, like, whore boots and a trench coat. And I take off the trench coat and I'm naked!"

"Shit, I forgot the pizza, though."

"I thought you brought it inside with you."

"What, naked? You don't wanna go outside naked, this is a bad neighborhood. Some crackhead was out there earlier trying to sell me some stolen DVDs."

"Did he have anything good?"

"Well, he did have Five Deadly Venoms and The Matrix, but I already got those. He was trying to push a House Party boxed set on me. He wanted ten bucks for it."

"I might've given him five."

"Huh. Okay, yeah, so anyway…I grab my coat to go get the pizza. But then there's another knock at the door!"

"Is it another whore? Do I get a three-way?"

"Why do you want a three-way?"

"That question makes no sense to me."

"Okay, whatever, it's another whore."

"Yep. And he takes off the wig and you're like, oh shit, I know this guy!"

"Is it Steve? The guy I used to beat up in sixth grade? I was just a kid! Don't kill me Lady Steve! I'm sorry!"

"What the fuck!? I wanna complain to the manager!"

"He is the manager."

"Oh, right, I guess that would make sense."

"Um is not the right answer. Um gets you stabbed in the head."

"Great. Way to be dead when I need you to protect me. Now I'm gonna get raped and killed by the creepy old guy. Thanks a lot."

"Well…maybe my ghost can help."

"How drunk are you?"

"Are you…are you pointing to something? Because I can't actually see that over the phone."

"I'm pointing to my boobs. Because they're awesome."

"Yeah okay, so anyway you're dead and Norman Bates is staring at me because I'm all hot and naked. What should I do, ghost boyfriend?"

"Well…do you have any weapons?"

"Guess that'll have to do. What about a whip?"

"Yeah! First I'll hit him in the skull until he passes out! Then I'll bite off his ear and stab out his eyes with my heels!"

"And smash out his teeth and break all his fingers and cut off his dick!"

"Baby, you're frightening me."

"Okay, we're safe now. He's dead. What should we do now, ghost boyfriend? I'm still naked, by the way."

"Yeah, because you died wearing pants. So your pants died with you and now they're ghost pants."

"I'm not even going to question that."

"I grab your ghost cock and start stroking it. It's huge."

"Yeah, huge, got it. Can ghosts even get handjobs? Wouldn't your hand just pass through?"

"But I can't do it with dead Norman Bates in the room. You gotta help me move his body!"

"But I'm a ghost. All I can do is slam doors and break dishes."

"Wow, we really suck at this."

"Yeah, that sounds easier, let's just do that."

Related
Please Dispose of My Phone Number in the Correct Receptacle
Ginny Hogan
It’s Me, the Hacker Who Broke into Your Phone, and I’m Staging an Intervention
Mufeng Liu
I’m Finally Going to Get My Shit Together and Back Up My iPhone
Angelica Lai
Resources