Up until my recent injury (coma-inducing exhaustion brought on from sheer sexual fortitude), I haven't been a big TV watcher. I have not lived in a dwelling with any form of standard television access since I moved out of my parents' place five years ago, and even then, I'm pretty sure they didn't have anything other than basic antenna TV for the last couple of years.

Obviously anyone who knows me is aware of the fact that I have a select few shows that I not only still watch, but obsess over with a fervor and dedication matched only by lunatics who buy Apple products on launch day. It's kind of creepy, really.

So since I never just scroll through the channels or the Netflixes or the whatevers that the kids are into these days (breakdancing and crack, if the 90's taught me anything), I never come across any shows that I haven't deliberately decided to watch (through only the most legal and patriotic of means, of course. Of course). But since the aforementioned injury, I've had access to a Wii that's connected to Netflix, and with that I've really broadened my horizons in respect to television shows watched. I've found some great shows, and am really excited about continuing to watch them and get immersed in the worlds that they provide.

This article is not about those shows.

Some of the most popular shows on TV right now, and of the last couple years, I've never seen, and likely never will. I'm not one of dumbasses who instantly dislikes things because they're popular. Fuck that noise. Just for some reason or another, I've never seen these shows, and probably never will. So, I'm going to speculate on what they're about, based only on what I've gleaned from passing conversations, or, in one particularly embarrassing example, t-shirts at Walmart.

All foreplay aside, here's what I think six of the most popular shows on TV, that I've never seen, are all about.

The war began. The war was fought.

The war was lost.

It's the distant future. Nobody knows the exact date anymore. It's not important. What is important is that the ducks have won. And humanity is on the brink of extinction.

They lulled us into a false sense of security, seeming adorable and approachable. But in actuality they were feathered hate-machines using their comfortable down feathers to cover up their barely contained rage. And their horrible, explosive corkscrew penises.

That was pretty fucked up.

We blindly fed them bread in the park, for fun. We were such fools.

But then, how were we to know they had perfected the art of Gluten-Based Fusion? We should have seen the signs, really. For years, nobody had ever even heard of this gluten, but then suddenly, it was everywhere, and we only knew one thing about it. That it was bad.

Ha! We should have seen through such blatant misdirection from the Ducks. They wanted us to distrust Gluten, to cast it aside and never discover its true potential, so that they could harness it for themselves. Genius. Absolute genius.

By the time they made their move, we had no counter for it. I mean, how to you counter an assault of the combined might of Wheat-Byproduct-Powered Nuclear Death and weird, freaky corkscrew genitals. Really can't stress the weird corkscrew thing enough. It was downright off-putting.

And so now, here humanity stands. On the very edge. Almost gone.

In the last free nation of Beardistan, four (or however many there are) hairy, smelly, and let's face it, probably super racist men, are here to make a stand against the enemy.

Armed only with their wit, shotguns, duck calls, and the previously discussed piles of racism, these men slink through the forests and swamps of their homeland, stalking the ducks, taking them out one by one. Just generally fucking their shit up.

But do they stand a chance with just their skill and blatant racism alone?

We'll find out, as these men stand together against, The Duck Dynasty.

This is the harrowing tale of a young robot girl who is constantly being pursued by a horrific slug demon that is equal parts thumb and giant desert penis worms from Tremors. 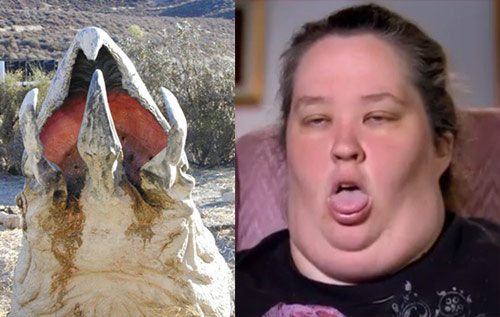 See? These are literally the exact same thing.

The poor girl was clearly originally designed as an anthropomorphic mascot for some sort of Southern dough factory, but now finds herself fleeing in terror from the aforementioned Fame-Beast, and now has to disguise herself as Elton John at various stages of his career in order to throw off the beast's scent (hence all the rhinestones and miniskirts. I may not know much about Elton John).

Lord Neckfold the Devourer was sent after the robot child by the evil oil lobbyists, in order to keep the world from learning that scientists had finally managed to design a machine that could run exclusively on old Mountain Dew and bad parenting.

It was to be the dawn of a new age of energy, but now this doughy little rhinestone receptacle must flee across the country for her very life, hiding under an ever shifting menagerie of disguises in order to slip away from a weapon created by Big Oil to literally be the least visually appealing monument to poor parental decisions ever.

But can she get away in time?

Find out, on this week's episode of Here Comes Honey Boo Boo.

Uh, yeah, I actually started watching House of Cards part way through writing this article. So…sorry about that. I guess.

While I still argue that the best political thriller on air right now is still Veep, I have to say that House of Cards really corners the market in having Kevin Spacey in the lead role of a television series produced by Netflix. Really harrowing stuff.

Before watching the show the only thing I knew about it was that Kevin McPolitics Spacey would often turn to the camera and address the viewers directly, not only breaking the fourth wall, but casting a dark spell on it so that it's very concept ceased to exist.

Knowing this, I for some reason had the notion that the show was going to be a gritty, politically charged reboot of Blue's Clues. No, I have no idea why. Yes, that is a thing that I really thought for a little bit there. Also yes, I still really want to find a way to combine the two shows.

Get to it, internet, you have two months to make House of Clue's a reality.

In all honesty I really don't even know if this is on the air anymore, but regardless I did manage to get a hold of a copy of the script for the original draft of the show. Let's read it together and see if this can shed some light on the ideas behind the show:

"About three things I was absolutely positive. First, Edward was a vampire. Second, there was a part of him-and I didn't know how potent that part might be-that thirsted for my blood. And third, I was unconditionally and irrevocably in love with him."

Hmm. Intriguing stuff. Just from reading that, it's really hard to guess the shows inspiration. But the originality present is both inspiring, and formidable.

People claim that the show is actually surprisingly interesting compared to the fact that it just sounds like the absolute worst. So I'm going to go ahead and assume that despite the obvious vampiric/supernatural ideas the show seems to be playing around with, the show takes a hard left turn sometime in the middle of the first season, and out of nowhere focuses on an all Irish basketball team that raps about swords and dietary supplements.

It's literally the only way this show could make itself interesting.

This show will be all about awesome zombie action sequences, and fight scenes and absolutely not about trite, poorly written and even more poorly acted out character drama that nobody really cares about. Because if a show that sold itself as a post-apocalyptic zombie survival series for some reason didn't focus on zombies and the killing of them, well, then that would be really dumb, and there wouldn't really be a reason for the show to be on the air, right?

Also, the one brother from The Boondock Saints will be there and have a crossbow for some reason, and always be really sweaty and make people unsure about their sexual orientations.

As I understand, this show changes story/cast every season, which to me sounds like a really hard way to make sure you have cheap rip-offs of more successful characters from earlier shows, like everything else on TV does, but hey what do I know.

The first season will focus on the minute of life in a large American city that they will pretend is Portland, but will obviously be Los Angeles because that's where the studio is, and will feature absolutely no monsters, ghosts, or otherwise supernatural entities.

Instead, it will be all about the true American Horror Story: the fact that you don't really matter. In a country that's become obsessed with the idea of not just fame, but the idea that every can become, and should become famous, the greatest fear is to find out that not only will you never achieve fame, but you'll never achieve anything that even matters at all.

You will have no more than a mild impact on the lives of a select few in your immediate circle of friends, who will have an equally negligible effect on the world as a whole and when any of you die your loss will not be felt by anyone of any importance. Everyone fools themselves into thinking that not only do they have something to say, but even more foolishly that people have any reason to listen to them. In a world where everyone has instant access to a dozen podiums and platforms online to fool themselves into thinking that anyone cares about their opinions, or their recommendations, or the pictures they upload, the real horror story will be the stark realization that nothing you do matters, and that nobody will know your name, and that the world, by default, owes you absolutely nothing, and that you are fooling yourself into thinking that you will ever be a part of anything important.

And then the second season will be all about dinosaurs in outer space and things will get really silly really quickly.

Related
All the Reasons Why My Screenplay, “Detective Tarantula: Web of Conspiracy,” Is Not Terrible
Ryan Ciecwisz
Fee-Fi-Fo-Fum, Will You Give My “Unbreakable Kimmy Schmidt” Spec a Read?
Ryan Ciecwisz
TV Shows from the Middle Ages Not Picked Up After Their Pilots
Ben Thomas
Resources