Transcript from the Murder Trial of My Teddy Bear

Prosecutor: Please state your name and occupation for the stuffed animal jury.

Witness: I’m Tony the Elephant. I am a board-certified private investigator by the Stuffed Animal Investigation Corp who was hired to examine the brutal murder of Teddy Bear by the human Michael.

Prosecutor: When did you first suspect Michael was guilty?

P.I. Elephant: The first time I watched the defendant, he threw a temper-tantrum claiming it wasn’t his nap time. Keep in mind, the family grandfather clock had just chimed that it was 2 PM, which evidence suggested had been his nap time for 3 months. Despite objective facts that it was indeed nap time, he stomped his feet and wailed, until his face was red. I thought, “wow, this human is unstable.”

Prosecutor: And what was Teddy Bear’s occupation?

P.I. Elephant: As a stuffed animal, he was there to teach Michael how to love. In his role, Mr. Bear was often praised for his kindness, dedication, and soft fabric.

Prosecutor: When did you first see the body?

P.I. Elephant: I was called to the mortuary to get the autopsy results in person. Mr. Bear died from what the mortician called the worst case she had ever seen of early-onset stuffing atrophy.

Prosecutor: Could this have been from natural causes?

P.I. Elephant: No chance, absolutely not.

Prosecutor: What makes you so sure?

P.I. Elephant: The mortician had made an incision above Mr. Bear’s abdomen to examine the three major organs in stuffed animals: the soft and cuddly organ, the unconditional love organ, and of course, the colon.

Prosecutor: What did you see when you looked inside?

P.I. Elephant: It was a nightmare. All of his stuffing was tangled up. His soft and cuddly organ was broken into such tiny pieces the mortician was unable to even locate it. The only hormone they found in his bloodstream was the love hormone oxytocin. All Mr. Bear was capable of was love.

Prosecutor: Did you do any investigative work on any potential witnesses?

P.I. Elephant: I overheard Michael’s Mom claim that the “wear and tear” occurred because Michael loved Mr. Bear. I couldn’t fucking believe it. “Wear and tear?” This was a four-year-old stuffed animal with a name. Teddy Bear. And his innards were that of a 92-year-old crack addict.

Prosecutor: Did you find Michael’s mom an otherwise credible witness?

P.I. Elephant: Absolutely not. I overhead her lying at least twice. She had a proclivity to both overstate Michael’s intelligence and downplay how often he picks his nose.

Prosecutor: How would you describe the relationship between Michael and Mr. Bear?

P.I. Elephant: Initially, the evidence that Mr. Bear was teaching Michael to love was overwhelming. He had engendered himself to Michael by always being there. In return, Michael took to snuggling Mr. Bear and without warning screaming at his parents if Mr. Bear’s whereabouts were uncertain.

Prosecutor: That sounds like a close relationship then, no?

P.I. Elephant: The relationship took a complicated turn as the excitement of seeing Mr. Bear faded when Michael developed a sense of object permanence. Michael began to live largely independently but would cling to Mr. Bear in moments when he was frightened. Like that time his mom changed her hairstyle. This behavior suggested that it wasn’t so much a friendship as a one-sided relationship that Michael used when it was convenient for him.

Prosecutor: Was there any physical evidence that Michael mistreated Mr. Bear?

Prosecutor: For the court, I am now showing P.I. Elephant “Exhibit A”. P.I. Elephant, please describe what you see in this first photo.

P.I. Elephant: Michael is sucking his left thumb and with his right hand he is holding Mr. Bear’s hand as Mr. Bear dangles. He is just clinging on for dear life while his body weight and gravity put enormous pressure on his rotator cuff.

Prosecutor: Now, P.I. Elephant please describe what you see in “Exhibit B”?

P.I. Elephant: In this photo, Michael is giving what he insensitively termed a “bear hug.” I know this term sounds like a loving embrace of two teddy bears who care deeply for each other, but in Michael’s twisted mind it meant something completely different.

P.I. Elephant: During this “hug,” Michael has his arms tightly wrapped around Mr. Bear. One arm around Mr. Bear’s midsection and another around his trachea. Michael is seen smiling.

Prosecutor: What would motivate Michael to do such a thing?

P.I. Elephant: You can’t apply fucking logic to these photos. But, maybe this is evidence Michael was leading an abusive and shameful relationship with Mr. Bear. Or perhaps a more disturbing view is that Michael did love Mr. Bear, but this is how humans express love.

Prosecutor: Thank you Detective Elephant. Your Honor, the prosecution rests.

Her Honor Moolissa the Cow: Thank you. Jury members I am now going to send you to the conference room to come to a verdict on whether Michael is guilty of crimes against stuffed animals. Lunch will be provided and is catered by Nelson’s Butcher Shop. 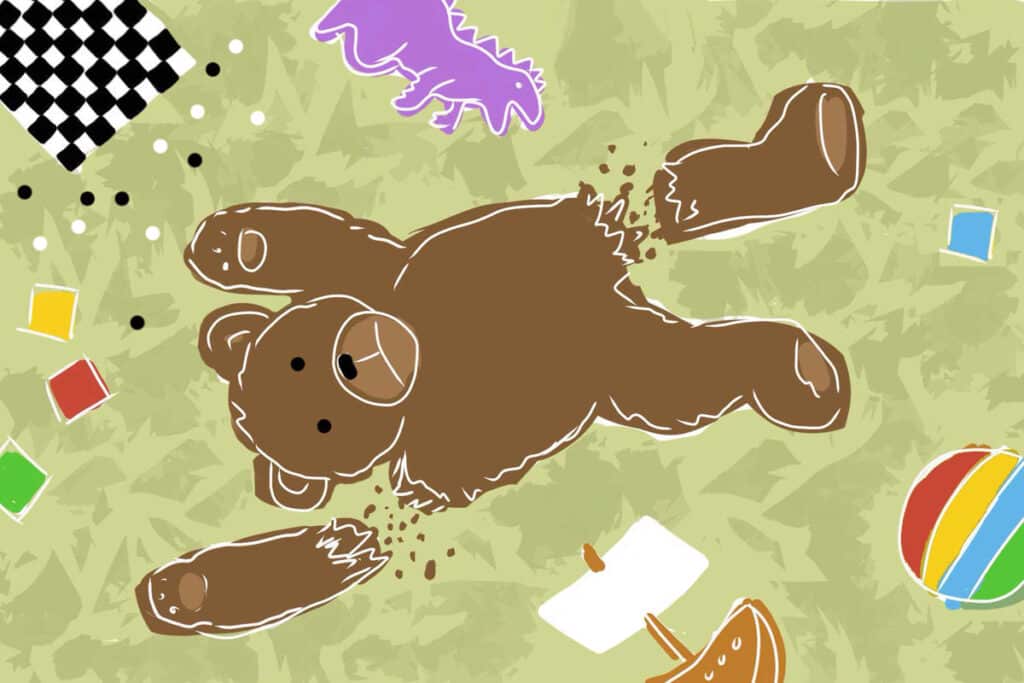 More Like This
I’m the Friend from a Prestige Documentary, and You’d Have Missed the Red Flags Too
Jeremy Hooper
A Gloating Letter from the Dean of the University of Phoenix
Kyle Qualls
Guestbook Comments from People Who Died at This B&B
Christopher Shelley
Comedy Courses

The dentist wanted to know if my teeth hurt, so I bit him.

Peloton Instructors Coach You Through Your Mediocre New Year’s Resolutions
Leah Abrams
How to Write About Your Anxiety Instead of Actually Dealing with It
Daniel Kozuh
Mice Review My Kitchen from Grad School
Valerie Lute
I’m Bob from the Bob’s Red Mill Grain Bags, and I Want to Inhale a Family-Size Bag of Flamin’ Hot Fucking Cheetos
Seth Sawyers