Sneeze prevention measures are underway to save lives.

According to the latest government statistics, the cellular phone has been surpassed by a new “#1 Cause of Traffic Accidents”: sneezing. Sneezing has long been overlooked as a dangerous element in vehicular mishap, but is now coming to the forefront as a portent for disaster.

Much of the recent attention to this matter was sparked by a routine traffic accident. An 85-year-old Arizona man was instantly reduced to ten pieces after veering off a steep cliff with no guard rails. Local police and insurance agents blamed the accident on the man’s lifelong impotence, history of suicide attempts, nasty recent divorce, driving without proper correctional lenses, and talking to a 900 horoscope line on his cellular phone at the time, but the federal government had its share of doubts. Forensic experts were able to provide government officials with one crucial discovery: the man had engaged in what is known as a “quadruple-sneeze” just moments before plummeting to his premature death. 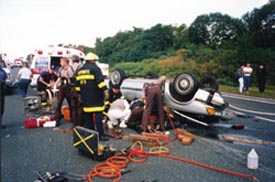 Widespread speculation led immediately to a second investigation. The government jumped at the opportunity to test its theory. Five hundred test subjects were fed FDA-pending drugs to induce “quadruple-sneezes” over a period of three hours. The subjects were then instructed to drive around metropolitan Washington D.C. The subjects' cars were tagged with GPS satellite tracking systems in order to monitor their location and status. Government analysts were shocked to find that 379 people were involved in traffic accidents, with 159 people injured and 39 fatalities. Even more surprising was that 43% of people killed in traffic accidents in the last 6 months in the D.C. area were found to contain trace amounts of penthamyline (a byproduct of “quadruple-sneezes” that will accumulate upon termination of blood flow) when the bodies were exhumed and meticulously examined.

As a result of these findings, the government now requires car companies to install sneeze detectors as a standard option on all cars manufactured after 2001. Industry experts liken the new safety measures to the past introduction of features such as child locks, driver's side airbags, passenger side airbags, airbags in the back of the front seats for rear passengers, annoying middle seatbelts that hurt to sit on, rollbars, standard child-seat installation equipment, rear windows that only roll halfway down (popularized by the need to contain offenders during roadside “citizen's arrests”), brake lights in the rear window, and many more. These sneeze detectors react instantly to the onslaught of “quadruple-sneezes” and activate small, but strikingly powerful strobe lights located on all four sides of the car to alert other drivers of your incapacitated state.

The government has also jumpstarted a nationwide campaign aimed at “sneeze prevention.” Efforts are already underway to mass-distribute informative pamphlets and target fifth grade students with school prevention programs. A new restriction will even be placed on the back of driver's licenses in 37 states requiring drivers with allergies to have special “anti-sneeze” inhalers within arms reach while driving in case they “feel a sneeze coming on.”

The government has set a long-term goal of 10 years to eliminate sneezing and driving although they have no expectation of achieving it. Government spokesperson and chairman of the “Don't Sneeze Pleeze” campaign George Wheezy commented, “We establish goals in order for us to remain optimistic, but past government efforts point to a 25-year delay before this thing gains any attention.”

Related
Please Stop Bursting Into My Darkroom to Question Me About a Murder
Pete Lynch
If Authors of Children’s Books Had Succumbed to the Dystopian Fiction Craze
Mason Binkley
Hello? Should I Stop Buying Kale?
Calen MacDonald
Resources