Behind the Sneeze Guard: Why Buffets are Terrible

Millions of germs everywhere agree, the "less-you-can-eat" the better.

As western society started to do a little better than "not starving," a new paradigm of eating arose. The glorious buffet! An enterprising establishment could create a low-cost, low-quality menu for everyone, rather than deal with the headache of taking orders, figuring out what everyone ate, and billing accordingly. It was a win-win situation for everyone that didn't barf up a kidney, a symbiotic relationship between glutton and enabler.

Thanksgiving was probably the first buffet. It's tempting to think the Last Supper was a buffet, but, according to leading biblical scholars/food critics, that's inaccurate. The Last Supper was more like a Chinese place where everyone orders a dish and kind of shares, but not really. Then you get pissed off when one of the apostles eats half the General Tso's Chicken without chipping in. That Bartholomew is such an asshole.

Thanksgiving may have gone well, but buffets have declined ever since. And today, they're basically the worst thing ever. Here's why. 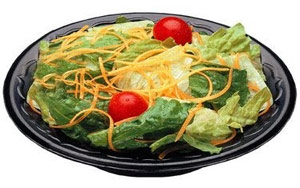 Any time you visit a restaurant, you basically forfeit the ability to be choosy about what you eat. I know most restaurants are mandated to have "healthy" options, and this is because of one or two litigious fatsos. They figured out that an addiction to heavily-salted, fried, smashed patties is worthy of fabulous cash prizes if you lack the dignity to claim you were tricked into thinking that they were good for you.

But even the healthy options come with a heaping side order of "relatively speaking." Yes, you can get a salad at McDonald's, but to reduce calories, you'll have to forego the dressing, cheese, croutons, and everything else that might make it remotely palatable. And if you come to a fast-food restaurant to eat a plate of lettuce, it may be time for an economics lesson and a trip to Whole Foods.

A single meal can be unhealthy in many different ways, but at a buffet, you're guaranteed to eat poorly in every possible direction. You will consume too much fat, salt, sugar, carbohydrates, rat feces, antimatter, and any other bad thing you can imagine. It's the culinary equivalent of being caught in a tsunami while trapped on an erupting volcano…and the nearest town has been overrun with robots while the sun explodes. 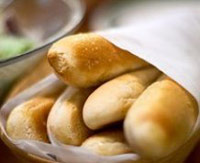 I'm not sure why, but many people approach a buffet with a competitive mentality. "Today, I will make them sorry they ever dared to try this business model! Even though I will pay only $21.95, I will easily eat more than $25 worth of food! More, if you count the breadsticks I will sneak out in my sweaty folds."

The idea of "all-you-can-eat" is inherently disingenuous. Oh, you can gorge until there is a pasty mash oozing out the side of your mouth while you struggle to master your own swallowing impulse. But unless you bring a sleeping bag to camp out by the roast beef station between shifts, these restaurants are counting on the fact that there's only so long a glutton can sit in one place without developing bedsores.

And consider that length of time, divided by the ultra-cheap ingredients (mostly Z-grade meat and sawdust), plus the exponential probability curve of needing a clean, private bathroom for an explosive bowel movement. Chances are, you won't be there long enough to see your investment in diabetes research appreciate in value. 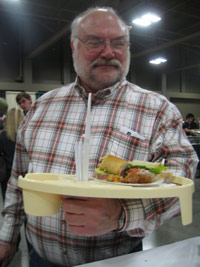 In theory, we're all capable of obtaining and preparing food for ourselves. It may not be 5-star dining, but everyone can microwave a can of soup or something. I have to think that part of the reason we choose to outsource the process sometimes is because we don't want to deal with the logistics. For example, on some nights, you'd probably eat roof shingles if they were topped with melted cheese, but the actual act of fetching them would be more than you can handle.

Accordingly, if I've made the decision to go out for a meal, the one thing I do not want is to have to schlep my own food through a crowded restaurant. This is unilaterally a job for waiters, and to a lesser extent, undiscovered actors. Waiting tables is unforgiving work at the best of times. Why would I volunteer for the position?

In more practical terms, carting your own food at a buffet around exposes you to unnecessary criticism and risk from the other slugs eating there. I don't need some guy in a confederate flag t-shirt looking down at me because I put ranch dressing on my cinnamon roll. And having food brought to my table by a server virtually guarantees I will not be bumped by a group of unsupervised, feral buffet children. 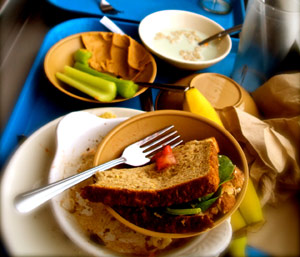 There's no getting around this; the very idea of a buffet is probably putting us on some alien world's watch-list. Generally speaking, the allure of unlimited options makes us all into Caligula. If you feel like getting six slabs of prime rib just to drip the juice on some bread and throw out the meat, have at it.

I swear, the wasteful shit that goes on at buffets is unreal. Customers see nothing wrong with spooning out a cubic foot of mashed potatoes, just so their fried chicken has a little pillow on which to sit slightly closer to their mouths. If food costs start to soar, buffets will probably just hire lackeys to tell each starving person around the world to fuck himself on an individual basis.

When you're starving to death in Cambodia and you hear about some guy throwing out a pound of "lookin' sushi" (them Asian things just fer lookin', not fer eatin') you're entitled to be a little pissed. "You're just going to smell that lasagna? No? You're… you're just going to dunk it in a milkshake to test its buoyancy? Maybe you slobs should also hold a vaccine-destroying contest while you're at it." 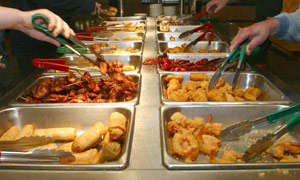 Unless the owners were just yelled at by Gordon Ramsay, the general cleanliness of a restaurant is always suspect. You just have to get on with your life, mindful of the fact that your food was likely prepped by a greasy, sullen teenager with very little stake in the food poisoning suit that may follow. As long as there are no cigarette butts or Band-Aids in the food, customers can at least pretend there are some standards.

But buffets can't even muster the illusion of cleanliness. A tray of buffet food will be subjected to an endless parade of sweaty mouth-breathers fumbling with the ladle, reaching over it with flabby armpits to get to some other item, and generally spreading their DNA around in ways I don't want to think about.

Remember, it's only the employees who are required by law to wash their hands after taking a dump. And as laws go, that one is about as enforceable as copyright protection for comedy articles on the internet. And if you think those sneeze-guards are the answer, just remember that every barrier you put between buffet customers and their precious feast is one additional liability that might show up in an autopsy. Is Plexiglas digestible? Are buffet restaurants willing to risk it?