A second attempt at weeding out the most annoying status offenders.

Wow. I did not expect the outburst of hatred that spewed from a handful of people who made the odd decision to “friend” me on Facebook some time ago. You reached out to me. You wanted me to join in the Facebook union of people missing social skills, and I accepted the requests with arms wide open, assuming that you all knew what you were getting into. Despite your initial yearning to have an asshole like me on your friend list, some of you have decided to now ostracize me from the group.

Recently, I wrote an article describing my disdain (I suppose that the more appropriate word is hatred) toward inconsequential and frivolous Facebook posts regarding children. Surprisingly, I have caught a rash of shit from my “friends” accusing me of being callous, rude, and jealous of their inability to keep it in their pants.

I'm surprised your kid was born with hands at all. Your “little man” should have lobster claws and a forehead the shape of New Jersey.My true friends know who I am, and what I'm capable of, so let's get something straight. I differ from a lot of you in the fact that I have spent the past 20 years making a concerted effort to keep my legs together, wear multiple condoms in sketchy situations, and have sex with women who didn't know my real name or phone number. I have successfully maintained a highly premeditated process to ensure that children were not going to insert themselves into my playboy lifestyle. Thanks to Facebook, I am now relegated to hearing about every movement and desire of a bunch of brats that I don't know or like.

I still have some people I would like to alienate, so in an attempt to lose 3 or 4 more friends, I will make my point again by commenting on some recent posts I've seen.

“Playdate for Esteban today, and a much more fun playdate for mommy and daddy tonight :)”

Oh god, I just realized this could lead to MORE status updates…Your sex life with your husband has you resorting to posting this hideous rodeo on Facebook? I can guess that Esteban and his friend will probably play video games all afternoon, but I can't wait to see what kind of “playdate” mommy and daddy have after hours. Please, please, please videotape that predictably unimaginative session of you two hippos banging. Since we all have to hear about it on Facebook, I think we reserve the right to witness this semi-naked disgustingness that happens about as often as Halley's Comet. The only person who cares that your husband is going to get an awkward handjob from a hotdog-fingered shithead is him, and even he isn't that excited about it.

“All work and no play make my Jackson a dull boy”

Correction: Genetics has made that jerk-off son of yours dull. Asshole.

“My little man found a lady bug, picked it up, and flushed it down the toilet all by himself! LOL”

The ability to do that was facilitated by a little thing I like to call “opposable thumbs,” which I am amazed that he even possesses considering the 18 different medications you took while he was in the womb. Shit, I'm surprised he was born with hands at all. Your “little man” should have lobster claws and a forehead the shape of New Jersey. Just be thankful your freaky Rocky Dennis kid can flush a toilet without resorting to using his mouth.

“The stomach bug has finally hit the Billiter household :/”

There is a mathematical theorem you should use in this situation. Take the number of people in your home divided by the number of bathrooms that you have. If the outcome is greater than 1, someone is likely going to have to shit in the backyard at some point. I would suggest that it not be you, since those dumps would leave game wardens worried about the return of the baby elephant.

“Big day ahead. Santa will be coming to the Boy Scout X-mas party tonight. Alex can't wait to tell him what he wants!!!”

I can already tell you what's on Alex's wish list. Alex wants a mother who focuses more on his needs than letting the world know that he's going to visit some half-assed, gin-soaked mall Santa. Actually, half-assed and gin-soaked would be a best case scenario for your shindig considering the fact that you're sending your child to an organized NAMBLA meeting every week. You better hope Pedophile Claus doesn't have his dick sticking out of the bottom of a popcorn bucket, directing your precious Alex to “dig around in there until you find something fun to play with.” 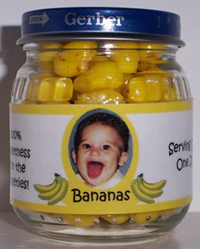 Talk about an attention whore. Next thing you know, your little girl's going to be earning money posting pics online. What the fuck does that even mean? Your kid came up with the idea of putting tags on baby food jars? Sorry, but I'm confused. What kind of flea market baby food are you buying where there aren't labels already attached? Getting baby food at the dollar store may not be the best idea you've ever had.

There is another question here as well: why is a child who is capable of conceptualizing and designing any sort of tags still eating baby food? I hope to God this kid isn't also still suckling. If the kid can write out a tag, I assume she can talk. Once your daughter can verbalize the fact that she wants to suck on your wife's tit, you might as well pack it in because you aren't ever going to get a piece of her ass again.

Good luck with that dude.

“The latest addition to our family has finally arrived. Gabrielle Brooke Caruso came to us this morning at a healthy 10 pounds, 4 ounces. We are so blessed”

I just took a look at the photographic proof of your newfound birth control failure. What the fuck is going on here?!! Why are her eyes on the side of her head? This kid's peripheral vision is going to be amazing. I know you aren't supposed to call children ugly, but your Gabby looks like a flounder, and will probably mature into an enormous one at that. Jesus Christ, 10 pounds, 4 ounces? You won't think you're so blessed in 16 years when you find your unsightly kid crying in a dark room on prom night because all the boys have spent the school year referring to her as “Double Filet-O-Fish.”

Do they even still make Calgon? I thought that shit was discontinued after a scathing 60 Minutes exposé showing that it caused mental retardation in children. Oh, sorry. Your retards are probably the reason why you have this Lord of the Flies situation going on at your house. Maybe you should get the fuck off of Facebook and be the parent that nobody rightfully thought you could ever become.

Hopefully, this article won't stir up too much more of a shitstorm with my friends, but fuck it. I'll deal with them later. Good luck with your brats, and leave me out of it.

Related
I Am Your Father’s Man Cave
Derek Andersen
Please Allow 21 Business Days for Us to Disregard Your Request to Unsubscribe
Brian Pinaire
Hi, This is Jimmy from Wikipedia and I’m Writing to Ask, One Last Time: Please Consider Paying Me Back for Your Portion of Last Sunday’s Brunch
Josh Lee
Please Insert Your Chip Into the Card Reader
Colin Heasley
Resources