The unlikely superhero standing up to rapists everywhere.

I fell out of bed one night as I always do and came up with the idea for a new comic book character unlike any other. A character that would fight for truth, justice, and the consensual way. That's right, I'm talking about Richard Peter Johnson, otherwise known as Dick: Defender of Rape Victims.

By day he dons his mask and hides out under the un-assuming name "Penisman." He drives around incognito in a van called the PeePeeMobile (at least until his lawsuit with Oscar-Myer is settled and he can go back to calling it the Weinermobile) and stops at local high and junior high schools to warn innocent children of the dangers of pre-marital sex.

Dick Peter Johnson roams the streets of skid row, the halls of the prisons, and the cul-de-sacs of suburbia in search of the scum of the earth. What nobody knows, however, is that this mild-manner pseudo-superhero is actually the mysterious and powerful Dick Peter Johnson, dark vigilante.

Loved by the public, hated by the police, and always stalked by television reporter Holly Hyman, Dick Peter Johnson roams the streets of skid row, the halls of the prisons, and the cul-de-sacs of suburbia in search of the scum of the earth. The rapists, child molesters, the animal bonkers.

By night Dick Peter Johnson travels in his 1989 Yugo dressed in jeans and a plaid shirt. Nobody has ever seen him this way. Nobody would believe a superhero would fight crime with his own birth image and conceal himself in a costume. It's always supposed to be the other way around. But it can't be, because being "Penisman" is the only crummy job our hero could get in this economy. 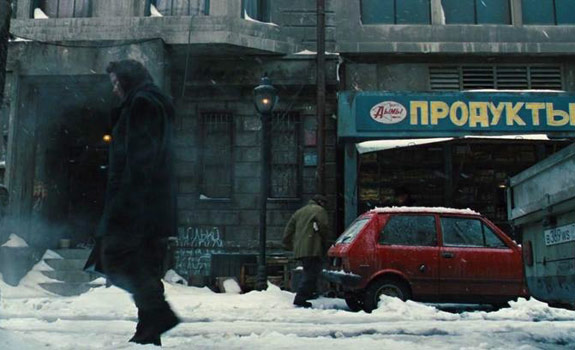 He began as a sign spinner for an abortion clinic and worked his way up to costumed spokesperson for Planned Parenthood. It was then that he decided to take the law into his own hands. It was then that he decided to wear the costume all day long. Since he had no friends anyway, there was no worry about people finding out what he really looked like, and that made for the perfect disguise. Glasses-wearing, mustache-sporting, Aqua Velva-splashing Dick Peter Johnson.

His methods may be a little on the crude side, but that's because they work; and they work because no one expects them. The Giant Dildo—best blackjack in the world. Whips and chains courtesy of Golda's Sex Shoppe, Dick's trusted supplier of weapons. Bondage tape, handcuffs and hangman's nooses. Ohhhh Golda, where would America's Superhero be without you? And with the stupid Penisman costume he can walk right in and go on a total shopping spree without anyone asking questions. For who, dressed as a giant dick, wouldn't go on a shopping spree at Golda's.

It's perfect, Dick thinks. Everyone knows me as the giant dick but no one knows that in fact I am the Dick. I am the Dick alright. Dick Peter Johnson. Un-costumed Superhero. (Oh, you got it? Sorry. Didn't mean to hit you over the head.)

In one episode he sneaks into a prison and stops a shower rape by handing the rapist a radio. ZAP!

In another he saves a bride from being "consummated" by her new husband by tearing open the motel's water bed and drowning the so-called groom.

And in a very controversial issue that's sure to win me one of those animated storytellers awards, whatever they're called, he stops a minister from raping his own daughter by shoving pages from the bible down his throat and choking him to death.

That's right, Dick Peter Johnson doesn't turn these scumbags over to the police. He is a Dark Evening (I don't want to get sued for using the word "Knight"). He kills these vermin. He is a tortured soul. He is, after all, a Dick.

Every superhero, regardless of the comic book line he comes from, must have a nemesis. Superman had Lex Luther, Spiderman had Doc Ock, and Batman had two—Jack Nicholson and Heath Ledger. Dick Peter Johnson has the always evil, never holy, sometimes pious, Father Lester the Molester (he leaves that last part out on his business cards) of the St. Mary of the Blessed Candles/129th St. Catholic Church.

Of course, there's a dark beginning to this story, but I haven't thought it up yet. (Maybe Dick was molested by Father Lester when he was an alter boy many years ago, but I don't see how that would work since I decided to make him an ex-Amish.) (Perhaps there was a time when, driving around in the PeePeeMobile, he stopped at the church for directions and the priest misunderstood his intentions because he had the goddamed Penis suit on. That would make the rivalry rooted in a simple misunderstanding which would add to the darkness of the theme, I dunno.)

Oh yeah, so anyway now I have the evil nemesis who for one reason or another can never be caught by Dick Peter Johnson. And that drives our darkened hero down the road of madness. He won't quit until he finds and nails to the cross—and I mean literally nails to the cross—the evil Father Lester.

But until that faithful day when the two do battle for the final time, Dick Peter Johnson will be among us, fighting crimes on behalf of the innocent. And when his Yugo breaks down you can be sure he'll put a tarp over the PeePeeMobile and drive it real slow with the headlights turned off so no one will know that the unassuming Penisman is in fact a Real Superhero. The one the police want to grab. The one Holly Hyman wants to bonk. The one Father Lester wants out of his "special place" once and for all. The one, the only, dark lord of the dark places of the human soul: The Dick.