Living With My Boyfriend's Hulkamania

On the surface, it would probably seem that my boyfriend Jack and I have the perfect relationship. I instagram cute pictures of him on Man Crush Monday, he posts pictures of me on Woman Crush Wednesday, and once we even shared a single chocolate milkshake with two straws. 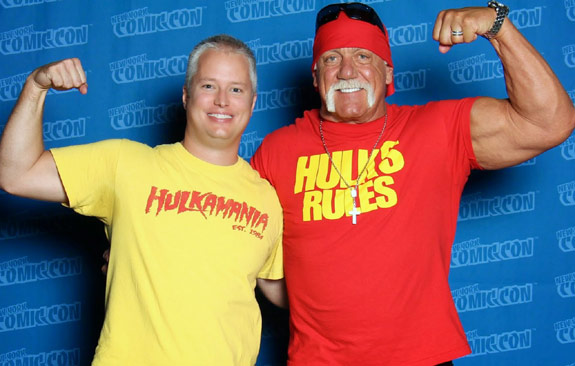 Lurking beneath the surface, however, is a dark secret that has taken a toll on the both of us. Several months ago, Jack was diagnosed with Hulkamanic Personality Disorder—known colloquially as "Hulkamania." To be completely honest, I'm still adjusting.

On the hardest days it feels like there are three people in this relationship: me, Jack, and former professional wrestler and confirmed racist "Hollywood" Hulk Hogan."In retrospect, the signs were all there, I just didn't want to see them. None of his shirts had sleeves, for instance. Once, when we were getting intimate, he yelled, "WATCHA GONNA DO WHEN THE HULKSTER RUNS WILD ON YOU?" I found he could only climax by putting me in a pile driver. I never gave these things much thought, just accepted them as personality quirks or kinks, but things only got worse.

The final straw was his baby nephew's Christening. Jack was supposed to be the godfather. When asked to profess his faith, Jack tore open his shirt and professed allegiance above all to NWO, "The New World Order." I urged him to seek counseling, afraid he'd been swept up in some conspiracy theory or cult. After one session, Dr. Boyer informed us the prognosis was far more severe. It turns out the only cult in Jack's life was the cult of personality surrounding six-time WWE champion and reality television star Terry Gene "Hulk Hogan" Bolea.

Anyone can be affected by Hulkamania, though white males are the demographic at the highest risk. Though no one knows exactly what causes it, additional risk factors include heavy abuse of chewing tobacco and consumption of Mountain Dew brand beverages.

There is no cure. With counseling, however, we've minimized the impact it has on our lives. We make daily compromises. I've agreed to increase our pay-per-view budget, for example, and though he still slips on occasion, he's agreed to stop calling me "brotha" in bed.

It will never be easy. On the hardest days it feels like there are three people in this relationship: me, Jack, and former professional wrestler and confirmed racist "Hollywood" Hulk Hogan.

But with each new day comes a new glimmer of hope.

Yesterday, together, we erased the last episode of Hogan Knows Best, from our DVR, and Jack conceded that sometimes, "Rarely, but sometimes," Hulk may not know better than Dr. Boyer.

This isn't easy to talk about, but I am not ashamed. I love Jack, and so I am bearing my soul, "Raw" so to speak, to give hope to those in similar situations. Remember, the first step is admitting you have a problem—only then can we lay the "Smackdown" on this epidemic.

Related
Stop Your Spiders Getting Chilly with Octo-Cozy™ Technology
Sarah Totton
How to Photoshop Yourself Dummy Thicc with Bob Ross
Ray Beer
Until They Invent a Profession to Help People With Their Issues, I Will Keep Burdening Women With My Problems
Hugo Ramos
Resources

Tired of Demure, Uptight Christmas Nuts? You Need Emeton’s Loose Nuts This Holiday Season
Sarah Totton
We’d Love to Offer You This Job, but I’m Afraid You Don’t Already Have This Job
Eddie Small
Sure, the Metaverse Is the Future, but Have You Heard About the Bubba Gump Shrimp Company?
Bradley Meyers
Now Here’s MSNBC’s Steve Kornacki with Our Basic Math
Pat Cassels