A childhood dream crushed by the weight of nothing more than reality's piledriver.

So here I am. Just a guy. A guy clinging onto his mid-twenties as he tumbles towards his late twenties. 27 to be specific. The average age of a professional wrestler about to hit the big time is 30, if I'm generous, and that's with a decade of training under his belt. So, it seems to me that, realistically, I'll (probably) never be a professional wrestler, let alone wear the gold around my waist as the champ of the world, though I am loath to admit it.

Now let's make one thing perfectly clear: I have done nothing, nothing, to achieve this lament of mine. I have taken literally no steps towards this at all. Like a kid who just assumes that one day they will magically grow up to be an astronaut without putting the work in. The assumption will carry them home. 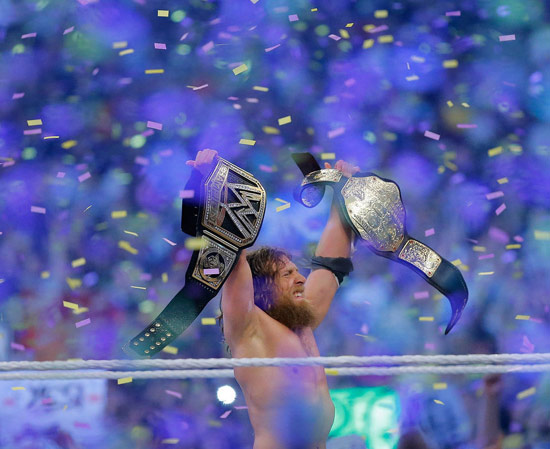 You might be 17, and observe a wildly successful, hugely popular, incredibly talented (sometimes) star, nay megastar, pop up into the sphere of celebrity. Then you observe their age: just 21! So young, and yet, they've seemingly conquered the universe already. They're only four years older than you, but hey, you've got a whole four years to catch up. That's bloody ages and that time will not fly by, under any circumstances. In four years' time people will be paying you millions of dollars to do very little, and the paparazzi will be fighting with one another to get a snap of you eating risotto in an extremely expensive restaurant in LA.

Suddenly, you're 27, and no one, not one person, has published any pictures of you eating risotto in the local rag. In fact, no one has published any pictures of you at all. You find, much to your lethargic confusion, that you never turned into that super successful, better-than-everyone-else person after all. At least not yet anyway. Most kids nowadays don't want to be doctors or architects when they grow up, they want to be famous. Famous for what exactly? Being a great actor? Great writer? Perhaps the wrestling champion of the world, even? Nope, just famous.

Being forced out of wrestling due to injury is way better than "my friends didn't want to jump around on a mattress with me anymore." When I was 14, I was a wrestling superstar. I was "Blade" and I had my own wrestling federation called FWC (we never decided what that stood for). I still have many of the tapes of our "events" and looking back at them, I was an egomaniac. Sure, I was humble enough to not script myself to be the FWC World Champion, but aside from that selfless gesture, my pimply face was constantly fighting its way into the frame. Every match, every segment, there I was wandering into the shot attempting to make it all about me. Me. Me!

Putting my titanic 14-year-old ego aside, my greatest nemesis in FWC was one Joe Jackhammer; we engaged in "brutal" matches where we jumped off of shed roofs and swatted each other with flimsy pieces of wood. Behind the characters, Joe and I thought we were being EPIC. We believed we had the crowd eating out of our hands. Sure, the first time we jumped off a roof, our 14-year-old peers might have half-heartedly gasped, but by the fifth time we had jumped off the shed in as many minutes, the novelty had begun to wear off. Some of them would later tell me they wished they had gone to play crazy golf instead. That was a nine iron through the heart.

Watching the videos now, I feel tremendous sympathy for Dev, the friend I roped in to commentate on these drawn out fiascos as two of his friends carelessly dropped one another on their heads, performed weak chops and throat thrusts, and rolled around on an old mattress in one another's arms, grunting and hollering, leaving a snail trail of fake blood wherever we went. Dev, to his credit, called these "bouts" with far more conviction and skill than our attempts to amateurishly piledrive each other through flimsy tables.

There were tentative plans afoot to construct a makeshift wrestling ring in my parent's garden. It was to be some mish-mash combination of car tires, plywood, ropes, and duct tape. Luckily for my long suffering parents, fate intervened before we could construct such a crude death trap. You see, it was about this time that my friends began to lose interest in pro wrestling; others just lost interest in me.

Just like that, my wrestling days were over. Blade was heading into the sunset a lot sooner than I had planned. I was 14 and my career was over. I was retired, unemployed, washed up. If I owned a pair of wrestling boots I would have hung them, somberly, in the back of my cupboard and every few months, opened up that cupboard and stare at them misty-eyed as they lay forgotten and alone in the darkness.

Sign or not, being 27, and not being an up-and-coming wrestling superstar is now proving difficult for me to accept. I mean, this isn't even something I even thought about until yesterday, but now that I suddenly realize I will (almost certainly) never be the greatest wrestler of all time, it's eating me alive. I just have to accept it. But let's not mince words: I will (probably) never be a wrestler. It's (probably) just not going to happen for me. Sure, I will join the ranks of people who will spend the next 50 years in an office before popping off this mortal coil, but that doesn't mean I have to like it.

I just wish… I just wish I could have gone out in a better way, man. Most wrestlers stop because time and injuries catch up with them. Yes, it's predetermined, but the reason most of my wrestling heroes aren't wrestling anymore is that they were dropped on their heads too many times, or their knees turned to dust. Why couldn't I have that? Yes, I was just a sprightly 14-year-old at the time, but being forced out of wrestling due to injury is way better than "my friends didn't want to jump around on a mattress with me anymore."

There was a guy in a rival wrestling federation who had to stop the wrestling because he "blew his knee out." God I was jealous. A peer in FWC once hurt his knee playing football and the lucky bastard got to wear a brace on his knee for a time. "Stone Cold" Steve Austin wore a brace on his knee! I wanted a brace on my knee. I really, really wanted a brace on my knee. I wanted to be the guy who was hurt but brave enough to endure the pain. The brace should have been my thing, but I never got the chance. I once lightly sprained my wrist (not enough to force retirement, sadly) and proceeded to wear a rollerblading wrist guard to support it when I wrestled. It was awesome.

In truth however, I only had two notable injuries in my brief, teenage wrestling career. The first occurred at school when I wrestled with some chums (they weren't expertly trained like I was and didn't know what they were doing). Anyway, as I grappled around on the grass, transitioning between a headlock and a hammerlock, a bystander was playing around with a large piece of broken metal from an old road sign. I deftly grappled my opponent to the floor when suddenly I felt a jolt of pain in my head. Then the feeling of blood. Warm, blood. I was bleeding, and none of that fake shit either. The bystander had accidentally let go of the metal sign (so he said) and it caught me square on the top of the head. He, and all my classmates, looked at me in wide-eyed shock. Bellinger was busted wide open (wrestling term for bleeding, no funny business).

I searched their eyes… "Is he going to cry?" I could read it in their faces; "Is Bellinger going to cry?" was the thought being passed around. I staggered to my feet, channelling my inner hardcore wrestler (again, hardcore means like "tough," nothing else). I had peaked in my wrestling stardom, even if the moment was, sadly, off camera. I was genuinely dazed, but I acted even more dazed. I was selling the moment for all it was worth, and by golly I wasn't going to cry. (I did very nearly cry a few months later on camera, when Jackhammer whacked me across the back with a cane during a match. The only thing that stopped me was glancing up and seeing the camera.)

My only other injury was slipping off the mattress we had layed on the grass in place of a wrestling ring, feeling a POP! in my big toe. It didn't really hurt, but it gave me something else to add to my "laundry list" of injuries. Just like a real wrestler. Later in the same match, Joe did a move on me which caused me to careen off the mattress and land in a pile of my dog's shit we had neglected to pick up. My Blade shirt (my entire wrestling attire) was now completely soiled by, of all things, my own trusty hound. I had hoped my mom would wash it off for me, but alas, she just threw it in the trash. Losing my only Blade shirt was the closest I ever got to a legitimate retirement.

The mother of the two boys looks up at the window and asks me to stop shouting, "All the time in the world, boys!" at her sons.

I blow her a gentle kiss.

She raises her middle finger.

I close the blinds, but continue to peer though the gaps.

Related
The Millennial and Gen Z Cusp Generation Needs a Name
Steven Peeler
This Halloween, My Son, You Will Dominate the Streets
Matthew Leader
My Only Job Option Is to Play Professional Baseball
Steven Peeler
Resources