A Letter to Myself at 14 Years Old

Secondly, that girl you're dating—how do I say this…yeah, you guys don't get married. I'll give you a minute to collect yourself….

I'm sorry, I know how hard you worked on that hemp necklace. Turns out you're both what we call co-dependent. Two dead batteries don't start a car, big guy. But not to worry, you will engage in a multitude of other horrific and emotionally destructive relationships with other women for the next decade or so. It's gonna be like a rollercoaster without the fun!! Wheeeeeeee!!!! 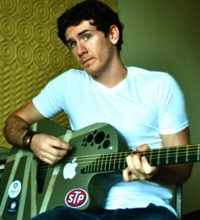 Stick with computers. Or not, see if I care.You know what, let me break it to you now, we are not married. More ghastly news, we are not the new guitarist for Limp Bizkit, either. On the bright side, we are doing something equally as ludicrous with our lives. Also, in 2010 you will be performing more shows annually than Michael Jackson, Kurt Cobain, and Jimmy Hendrix combined! Hey little Billy, that's called foreshadowing, now go look up the word "continuity" in the dictionary. I'm giving you gold here, boy.

But seriously, I guess I should say to stop drinking now but I'm not going to. That's something you are going to need to figure out on your own. I'm not gonna lie, you're going to have a really tough few years.

You are going to see some horrible stuff happen to you, your family, and your country in the next decade. You and your friends are going to have to grow up much faster than our parents did because the world is about to get really small in a really big way. You're generation is going to pick up where our grandparents left off. And I don't mean some Generation X bullshit like Rock the Vote or bringing back Woodstock. I mean real substantive change that you are going to have to facilitate. I just realized, you are probably going to have some trouble getting to sleep tonight.

But try not to worry about it too much; you'll be just fine. Enjoy yourself and for god sakes, stop listening to Blink 182.

P.S. Don't spend a dime of your inheritance. Wait until September 12, 2001 and invest everything you have in a company called Halliburton. Trust me, you'll thank you later.