The year was 1994. I was 12 years old. It was a summer I'd never forget and an event from which I would never recover. I got the call in August. After auditioning a couple months before, I'd almost forgotten about the show. But they called and said I'd made it. I'd be taping my episode in September.

When I found out that I was going to be a contestant I was ecstatic. I was going to be on Legends of the Fucking Hidden Temple! I told everybody: all my cousins, everyone at my school, even that weird guy who always parked outside the school playground and tried to talk us into getting in his van. I was a hero, nay, a legend.

The taping was on a Saturday. I got there at 9:00am and was put into a room with all the other kids while my parents went off to sign some waivers. I was introduced to my partner, a 13-year-old girl named Brandy. She was nice enough, but she was very spindly. She looked like a stick figure. I realized that I was going to have to carry this team because I wanted to win. I was going to have that goddamned trip to space camp, even if I had to step over Brandy's dead, mangled body to get it.

Then the host, Kirk Fogg, came in to say hello to us all. Or rather, he was brought in by two "assistants" and given a very large cup of black coffee while he mumbled greetings to some of the kids and ignored the rest of us. This was the first time I saw someone falling down drunk. And I'd never seen anyone who hated their job more than that man. While he was being relatively cordial to us under the watchful eyes of his handlers, you could still see the disgust in his face at what his life had become. It was haunting.

After that we all went out to the set to see everything before the show got started. We got to see Olmec, the big statue that explained all the games. I think this is where I began to lose pieces of my childhood because Olmec was the first and meanest racist I have ever met. You'd think that a talking rock would have a little tolerance, but not this one. Olmec called me the N-word… a lot, and even though Brandy was white he kept calling her a spic. I couldn't believe that he was allowed to talk to us like that but apparently the guy who did the voice of Olmec was one of the executive producers.

They assigned us our team colors. Brandy and I were the Blue Barracudas. I wanted to be the Red Jaguars but when I mentioned this Kirk Fogg threw his coffee cup against the wall and yelled, "You'll take the shirt we give you, pissant!" I tried to stay away from him after that.

The show started with the crossing of the moat. We had to jump on wooden planks that were floating on the water and make it across without falling in. I let Brandy go first. As soon as she touched the first plank she rolled right into the murky water, which looked like it hadn't been cleaned in months. She restarted two more times. Every time she fell in I saw space camp floating farther away. By the time she made it all the way across, I was the last one still waiting. I sprinted across those planks so fast I didn't even get wet. I dove for the button and barely edged out the last two groups, narrowly making it to the next round.

During the commercial break Olmec said, "That was impressive. But I know that you people can't swim so it makes sense that you'd move fast."

Next were the steps of knowledge. Here is where I learned that Brandy, aside from being completely unathletic, was a fucking moron. Olmec told us the story, then Kirk asked us questions from the story. If you think that is simple enough, get this: they gave us copies of the story before the show! So we were actually allowed to study beforehand. But no, Brandy got three wrong answers in a row. If you ever happen to see my episode in reruns you can see me roll my eyes and push her, by her face, away from the button on the floor. I answered all the questions and we made it to the next round.

When they went to commercial I asked if I could have a different partner. Kirk Fogg just laughed and belched in my face. It smelled like peppermint schnapps and kielbasa.

The Temple Games were next. Brandy went first. I didn't see her game because I spent 20 minutes in the bathroom blowing my nose, trying to get the smell of that putrid belch out of my nostrils. It didn't work. I smelled it for days afterwards. But, needless to say, Brandy lost.

For my game they hooked me to a bungee cord and I had to jump up and throw styrofoam rocks into a basket that was perched on a 10-foot tall pillar. It was a close game but I won by two rocks. The entire time I could hear Olmec in the background quietly chanting, "Jump, monkey, jump!"

In the third game they tied Brandy and I together and we had to help each other climb through a jungle gym of ropes and nets. She fell about halfway through but I just kept going, dragging her behind me like a sack of useless beef. She got some pretty bad scraps on her arms and face, but we won. We made it to the Temple Run. Space camp was in my grasp.

Brandy went first. To her credit, she turned it on for the final round. She moved fast and got through the rooms quickly. She had the full pendant of life and lost it to a Temple Guard but she didn't slow down. She made it to the Shrine of the Silver Monkey but got caught by another temple guard.

And I was off! I blew through that temple like a man on a mission. I followed Brandy's path and got all the way to the Silver Monkey in less than ten seconds. And this is where I met my downfall.

I never lived down fucking up on the Shrine of the Silver Monkey. I was full of adrenaline and I just didn't realize that the monkey's head was facing me. I slammed it down over and over again not realizing why no doors would open. And then time ran out. Space camp disappeared from my grasp in a big plume of smoke.

When I returned home I was ostracized by all my peers. I was mocked, ridiculed, beaten. Toy silver monkeys were thrown at me in the lunch room at school. My brother somehow found an exact replica of the one from the show and he would come into my room late at night and put it right in front of my face, with the head backwards. Then he'd shake me violently, screaming, "The monkey's here! The monkey's here!" I had nightmares for years. 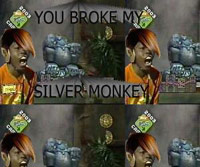 And of course, the racist irony was not lost on Olmec that the black kid could not assemble the monkey. For a half an hour after the show he laughed and said, "What's wrong, can't remember what you father looks like?"

So now, 15 years and thousands of dollars in therapy later, I have finally told my story. Sometimes I can even look back on it and laugh. But make no mistake, Legends of the Hidden Temple ruined my life.

More Like This
Working At This Diner for 35 Years, I’ve Seen All Walks of Life Deny Themselves True Culinary Pleasure
David Bradley Isenberg
The Good Life With My Rich Wife
Philip Loyd
Resources

Sometimes when I move the space heater from the living room to the bedroom, knowing I’ll have to move it back to the living room in the morning, I think, “WILL I JUST HAVE TO KEEP MOVING THIS BACK AND FORTH UNTIL I DIE?”