A guide for professors facing circular or redundant discourse.

The premise: gather together a bunch of educated, politically active millennial women to have a lively discourse on the issues of today, and the competing opinions will be fascinating! As a professor, you salivate over the possibility of contentious exchanges over sensitive issues. Your spine tingles with the thought of the abortion debate… 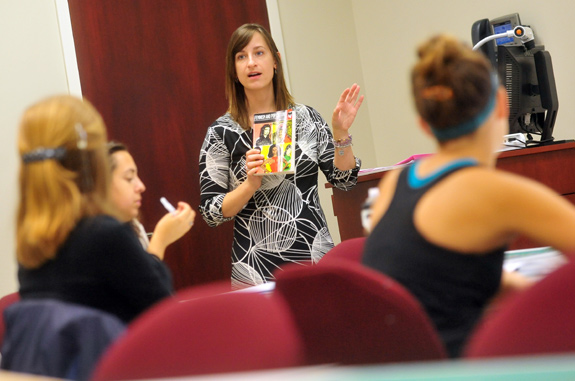 But if after several hours you find your hunger for debate and discourse still not sated, it is quite possible your women's studies discussion is going nowhere.

Here is a handy list to help you ascertain if the discussion has slipped into an irreversible and possibly dangerous state of mind-numbing dullness.

1. Students are running out of phrases to express their agreement with one another.

You have blasted through the straightforward "I agree with Samantha" and "Like what Hannah was saying…" to the more creative "To piggyback off of what Miriam said…" and "In the same vein as Sara…" and students are now clearly scraping the bottom of the agreement barrel, beginning their thoughts with such phrases as, "To augment the most recent statement by adding all of the key phrases I learned as a women's studies major…" and the overtly truthful  "I know Lauren just made exactly this point using different words but…"

2. You have run out of topics and students are forced to draw meaning out of the minutest of pop culture details.

If you're having a discussion on the meaning of the quarter-inch difference in Beyoncé and Adele's high heels, it may be time to end the lecture.

3. You are running out of affirmative encouraging responses to your students' sundry observations.

When "What an educated, insightful response, Taylor!" becomes "The plants appreciate your CO2 output, Taylor!" it might be time to assign some silent reading.

4. Students have finally tired of attacking the patriarchy.

If the mention of Donald Trump, Texas, Catholicism, or abortion wait times ceases to elicit a visceral, teeth-gnashing response, it is likely the repetitive banality of the discussion has finally lobotomized your students.

An early warning sign of this is a reduction in affirmative nodding when issues of race, class, and sexuality are brought up. Additionally, it is dangerous if students start using shorthand when referring to different racial and ethnic groups. When "African Americans, Hispanics, Native Americans, Pacific Islander, and Asian American" begins to be replaced by "Blacks, Mexicans, Indians, Other Indians, and The Chinese," you may be well-advised to steer the discussion back to the patriarchy.

A more subtle indicator that the façade of acceptance has begun to expire: when you're forced to field questions such as "But isn't racism against white people also a thing?" and "But isn't it their choice to be gay?" and "But conception is when life begins isn't it?" At that point, class needs to end before you discover that not all of your students are actually liberal democrats.

The garrulous women's studies major in the front row has stopped prefacing all her comments with "This is just based on my experience, and I know these issues affect everyone differently but in my (insert 4000 level Women's Studies class title) I learned…" Although you may be relieved to be free of her extra 20 seconds of yammering, it's a good sign that the rest of the class checked out hours ago.

Related
Decor Themes to Elevate Your Airbnb
McKayley Gourley
Nice One, Dipshit! You Hurt Your Dentist’s Feelings by Saying Teeth are “Just Okay”
Ryan Ciecwisz
Quiz: Have You Met the Girl of Your Dreams on Tinder, or HPV’s Patient Zero?
Kit Lively
Field Notes from the Archaeological Dig of Your Boyfriend Jake’s Instagram
Emily Altimari
Resources