Casual Letters from Kim Jong Un to the Western World

The Dear Leader just wants to say hi, and stuff.

Greetings from the Dear Leader

Comrade General Kok Suk Lee said writing letters is a good idea. Appeal to the capitalist lackeys in their Satanic Homelands. I hope he's right, for his, and at least five generations of his families’ sake, or they toast.

It is Autumn and at this morning’s executions I felt a bit of a chill. Still not as much as the traitorous dogs that got topped, but where they're going soon gonna be very hot. Haha that's a joke, not the executions bit, that's all too real, the very hot bit. You can laugh, I insist.

Kok Suk Lee said, appeal to the young, they have malleable minds. But looking at you lot, young don't come into it. I mean here in Pyonyang you'd be sweeping streets or emptying latrines, not sitting around all maudlin and writing self-absorbed doggerel. But anyway you will have to do, as the young obviously have better things to be getting on with.

North Korea paradise, where you live is not! Don't just take my word for it, instead listen to song by the “Pyongyang we love the dear leader and are willing to die for him ensemble.” Here are lyrics:

Oh Dear Leader we love you
in our North Korean home.
You have made it a paradise
never shall we roam.

See you'd never get that in that slave state to the Yankees in the south. Oh no, there you just get Gangnam style.

I will send another message to all new followers soon.

I'm watching you, so take care.

Consider this: no fat people in the glorious People’s Republic of North Korea. Contrary to what is written by the poisoned pens of Satan's journalists, this is not caused by lack of food. Turnip soup in unlimited supply here.

Some people, no longer living, have said I am well covered, but it is just hard toned muscle and not fat. In the West, great bloaters waddle breathlessly through their empty lives. No discipline, no exercise, just sit all day watching propaganda masked as soap operas and eating processed pap. These fatties proliferate, while we in this worker’s paradise stay slim and toned, or like me muscled, not fat.

One day when we invade, we run rings around you lardasses and will be victorious in the Final Great Battle.

I thought I would list some famous North Koreans. Ha! You thought there were none but you are wrong.

Kim Il Sung – My Grandaddy and founder of our modern progressive state, homicidal but with a heart of gold.

Kim Jong Il – My Daddy, turns out he was too. Ill I mean, a joke you can laugh, if you want your nuts lopped off with blunt shears.

Me, of course – The Dear Leader, a colossus that bestrides the continent of Asia and the Far East like a mighty lion.

Kok Suk – Fourth place in clay pigeon shooting event in 1948 London Olympics. He would have been first but accidentally shot a real pigeon with his final shot. Not sure what happened to him on his return home seemed to disappear without trace.

Pee-on Mee – She came up with the concept of the golden shower. Very popular here in Pyongyang, especially in Winter, when it warms people up. Not that we are short of fuel, this is a land of plenty.

Odd-Job – Best Bond villain and bowler hat assassin ever. Though the Spawns of the Devil in Hollywood and their slavish lackeys in the south say he is not from the north at all, but they are wrong. His grandpa was from the north and so that makes him one of us. Contrary to false rumors I am not his love child and I will personally shoot anyone who says that I am.

I wasn't going to do this, but Mama Kim said I should. So here is her recipe for people’s favorite Turnip soup.

I eat this every day, normally as a starter to my 15-course banquet and look at me glowing with health, vigour and muscle. Not fat.

Till next time and remember I will be watching you, so take care.

I am a very inspiring person, that's why all my people love and worship me. I am often amazed at the reaction I get when I appear in public, cheers, tears, mass hysteria and even though my personal secret police guard are an impenetrable wall and watching the crowd closely I can still see beyond them to the happy waving people and their spontaneous outpourings of joy.

I think I am so popular, as was my daddy Kim Jong Il and grandpa Kim Il Sung because I inspire loyalty with my words and sayings. Not at all like the leaders of you imperialist lackies of Satan in the west. So I thought I would share with you some of my motivational speaker skills to see if I can get you off your lard asses and do something inspiring. In this I think I shall for once fail, as you really are beyond redemption and ripe for us to take you out when you least expect it.

When I address the armed forces I normally feel on top form and have an array of stirring addresses:

“Make the entire army the leading force of guards who advance straight ahead with their guns levelled only in the direction indicated by the party.”

Sometimes I like to lighten the mood a bit to reach out to younger conscripts:

“Let us turn the whole country into a Socialist fairyland by the joint operation of the army and people.”

That one normally brings a tear to the eye. I also have a variation of that one:

“Let us build a fairyland for the people by dint of science.”

That thesaurus paid off.

When I'm visiting science parks I have a whole range of inspiring quotes, though the factory bosses sometimes look doubtful, but they are easily replaced.

Then when I visit the collective farms, where they really love me I have a whole range of inspirational quotes:

“Let us turn ours into a country of mushrooms by making mushroom cultivation scientific, intensive industrialized.”

Then I visit the deep water ports and regale the fishermen:

“Let this socialist country resound with song of big fish haul and be permeated with the fragrant smell of fish and other sea foods.”

That obviously worked because the whole place does smell of fish, sometimes fragrant.

We are becoming great at sport and again that is because of my inspirational words to the athletes.

“Let us fiercely raise the sports wind across the country.”

And they do too I might have to insist on a less high fibre diet for them.

I often end with a rousing crowd pleaser.

That always gets them on their feet, waving flags and generally jumping around with zeal and happiness.

So you see, North Korea has me. You have that woman who look like Maggie Thatcher’s cleaner, May, the guy who thinks he’s John Lennon, Oh yeah actually I mean Lennin, Corbyn, and the black guy with the ears Obama. You poor saps sure drew the short straw.

Good bye for now, but remember I will be watching you. 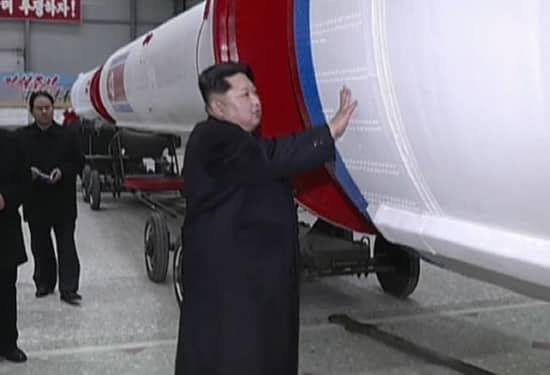 Haa! Big celebration in the Socialist Worker's Paradise tonight, that for sure. You big noses in the Yankee Satan's backyard and you pinkos in the South, soon to be part of the North, and the Nipponese losers too. You gonna take notice of us now. We launch a big rocket, not only that it big enough to take a payload. A newt. Ha, yes a newt, you shaking now.

One day you gonna look up and there it will be falling from a clear blue sky, a big Newt, courtesy of Kim Jong Un, that's me by the way. Ha, then your ponds and lakes are gonna… Hey wait a minute, a newt don't actually sound that scary. I just gonna consult the guy who wrote this speech Kok Suk Ah.

OK lackey's of the great Beelzebub, it actually a nuke, the rocket gonna be carrying a nuke. Jeez the whole thing been ruined now. General Wang, arrest that Kok Suk Ah, and send him for extra special rehabilitation with extreme unction, and his family too.

So anyway, have a great Sunday western stooges of Imperialism. And watch out for my big shiny new rocket. Gonna be heading to a city near you, real soon.

More Like This
An Open Letter from a Can of Soup Fed Up with a One-Sided Relationship
Hannah Byron
Excerpts from Tom DeLonge’s Next UFO Manifesto That are Definitely Not Pleas to Rejoin Blink-182
Cody Ziler
I Am Become Kiss Cam Operator, The Destroyer of Worlds
Dan Caprera
Resources

For my next trick, I will replace calories lost hiking with this bag of chips.