I, Pvt. Casimir Krzyzanowski, Demand an Immediate Apology from Napoleon, Emperor of France

WE'RE GOING TO RUSSIA!
This Pole has not forgotten Catherine the Great's soldiers entering our great city of Warsaw and slaughtering our children in the streets.
Now the valiant Emperor Napoleon and I come for your children, Tsar Alexander!
Together we shall partition Russia like your grandmother did Poland!
Dibs on St. Petersburg!

Vilnius, Russian Lithuania
22nd of July, Year 1812 of Our Lord

Napoleon has insulted this Krzyzanowski's honour!
No worries, though. My Emperor is just. An apology will come.
Every month Napoleon sends fresh begonias to Claude's matka after his strategically brilliant cannonade destroyed her shtetl.

Six days since Napoleon—of all people!—viciously trod on my foot.
Still no apology!
He knows I deserve gardens of begonias for this unconscionable offense!
Perhaps he is just nervous?

What's Left of Smolensk, Empire of Russia
2nd of August, Year 1812 of Our Lord

This morning my former hero strode by.
Claude, Szczepan and Jaromir motioned to my vibrantly-colored foot as Napoleon passed.
This prompted him to mutter,
"Sorry about the foot, Cezar."
IT'S CASIMIR! CASIMIR KRZYZANOWSKI!
The feud is redoubled, sir Emperor!! 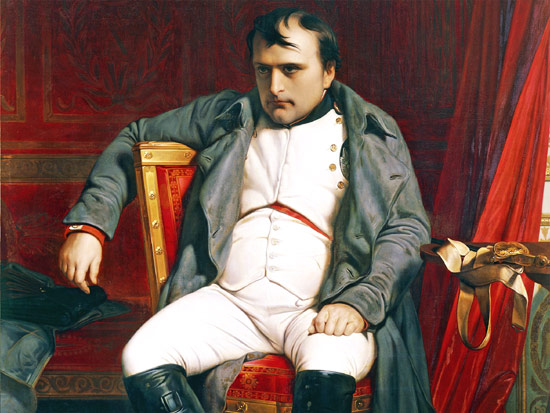 "THIS guy… you've got to be kidding me…"

An Empty Brothel, Empire of Russia
3rd of August, Year 1812 of Our Lord

Emperor, after you rescued Poland I dreamt of riding by your side—and feasting together on "Tsar Alexander stuffed with Caviar."
But now I shall destroy your empire with my babcia Grazyna's shoe clasp!
On her deathbed, babcia Grazyna told my matka, "This clasp held together Judas Iscariot's sandals."
It is a most unlucky item.
Why else would Fyodor's first seven wives all succumb to cholera on the 8th of September? Do you think Tsar Alexander lost the Battle of Friedland simply from a poorly-organized right flank?
Prepare for doom, Napoleon Bonaparte, Emperor of France, King of Italy, Mediator of the Helvetic Confederation, Protector of the Confederation of the Rhine, Commander of the Grand Armee, and a First-Class Inconsiderate Meanie.

Borodino, Empire of Russia
7th of September, Year 1812 of Our Lord

Daily Napoleon screams, "When will these torrential rains cease?!"
After one apology Emperor. To CASIMIR.

Happy 134th birthday, babcia!
I celebrated by watching the blazing inferno of Moscow.
Surely we will all die here. What a thorn in the Emperor's plans that will be!

Village Without Villagers, Empire of Russia
25th of October…or 26th or 30th. Time flies when you're having fun.

Last night on sentry duty I let a few thousand Cossack riders enter and decimate what remained of Oudinot's II Corps.
I am become death.
What a phrase! Place Krzyzanowski beside Milton, Virgil and Homer.
Tonight at dinner I threw out my rationed spoonful of succulent rat stew—my soul was already on the verge of bursting.
I am filled with heartwarming daily reports of Russian snipers, typhoid epidemics and starvation.

I wear Jaromir's cloak.
I write with Szczepan's marrow.
The Grand Armee is shattered!
So little food, but so much to smile about.

Alone, half-naked in the snow, I sing "Ave Maryja." Each spasm searing through my destroyed body reminds me of Christ's grace on the Cross.
Through it all I clench the clasp, my rosary, my deliverance.
Napoleon, friend, enemy—lover in another life?—those Russian barbarians did not defeat you! Babcia Grazyna did!

The Angels are Welcoming Me Home

The frost has taken the foot you stepped on.
All I needed was for you to whisper, "Sorry, Casimir. I should have stepped elsewhere, Casimir. The field of begonias is already planted, Casimir Lechsyn Krzyzanowski. Master Gardener Ney assures me they will bloom splendidly."
Then we could have ruled this world.

Related
I Will Continue to Block the Slide Until We Build a Wall Separating Our Recess from Mrs. Montgomery’s Class
Colin Heasley
A Message to All Anti-Vaxxers from an Appreciative Resident in 2320
Jonathan Motney
Thank You for Rescuing Me From This Trash Can I’ve Stuffed Myself Into to Write a Novel
Lauren Tousignant
I Run Social Media for Your Local Craft Distillery, and I Can Photograph Bottles from Every Angle
Joseph Thomas
Resources