The following is the result of a "free writing" assignment in one of my MFA classes.  Basically, the pen goes down on the paper and doesn't leave until time is up.  Whenever any kind of block sets in, we write "Mary had a little lamb…" until it leads to something else.  When I finished, I was relatively pleased with the results.  It's ridiculous and it's rambling, but I thought you all might derive a little enjoyment from it.  Plus, I put Mary in her place.  She had it coming. 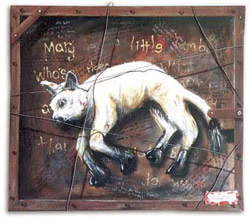 What is character? Character is what you build when a football hits you in the nuts.  Character is what you are when nobody has any nice words to describe you.  Character is one part of a whole, or the whole made out of many parts.  We play characters who dress in costume and assume different identities and sometimes we live in shitty apartments we say have "character."  Sometimes I think character is missing an extra "h."  It bothers us when characters we like die.  Sometimes we really wish characters would die.  Building character is a terrible guise for things we don't want to do.  Mary had a little lamb.  Mary is a character.  The little lamb is a character.  Why the hell weren't the children laughing and playing before the lamb came to school?  It's not even a good nursery rhyme.  It's repetitive, trite garbage.  Take that, Mary, nobody likes you and your stupid lamb.  The children are laughing at you, not with you.  What happens when the lamb shits in the classroom?  Having that stupid lamb with you won't seem like such a great idea.  Way to be the weird girl with a lamb, Mary.  You probably think you're a free spirit, don't you?  Nope, you're weird.  You know people eat lamb, right?  It's delicious.  That's probably why your parents got a lamb, you know that, right?  People don't just get lambs for no reason.  Oh God, you think you're going to save its life, don't you?  How adorable.  No, that lamb is going to be eaten.  Probably by you.  I kind of want to be there when they tell you.  It'll be like that South Park episode where Cartman makes the kid eat his parents.  They're mixed into chili.  Your lamb probably won't be chili.  It'll probably be a nice shank.  Are you crying?  Of course you are.  You're Mary, the weird girl with a lamb who cries all the time.  You're the best around, nothing's ever gonna keep you down.  That's from Karate Kid.  Hilary Swank was in one of those.  I don't think that song was in that one.  Can anyone actually tell me the plots of Karate Kid 2 and 3?  Or The Next Karate Kid for that matter?  Does anyone care?  That's your problem right there.  Kids don't care about anything these days.  I wish you all could be karate kids.  Or the 3 Ninjas.  High Noon at Mega Mountain.  Or the Surf Ninjas.  I'm sensing a 1980s and 90s obsession with martial arts.  Not to be confused with martial law.  Not to be confused with Marshalls, where you can dress for less.  Actually, that's Ross.