Don't Blame Me, I'm Just the Manager at This Olive Garden

Listen guys, the tip sharing, the uniforms... everything was corporate's idea.

Hey everybody, gather ‘round. Rough day today, guys. Roughhhh day. You all really stepped up during the dinner rush, and we got through it. Go us! I think I can speak for all of us when I say "No more minestrone soup!" am I right? It's fun sharing a joke with you guys. We're all in this together.

Alright, time for the evening announcements. This is being passed down from corporate, so hey, don't shoot the messenger!

I don't want you to think there's some sort of barrier between you and me. I'm the manager, sure, but I'm also a person. It looks like, from now on, let's see here…we're going to be pooling tips. I know, I know. Hey, look, Karen, this isn't coming from me, remember? It's just my job to read ‘em. Remember "No more minestrone soup!"? Remember how we laughed? I wouldn't make you pool your tips if it were up to me. Sometimes, though, when you run food out to a table or you refill a table's drinks and then the person who took the order gets the whole tip, that doesn't make a whole lot of sense, does it? Seems a little unfair. In those situations, maybe it makes sense to split them up?

No, I'm totally not saying I agree with it. Not at all. I mean, I guess I'm not paid to think, that's just how I'd do it if it were up to me. But it's not up to me. Remember that. 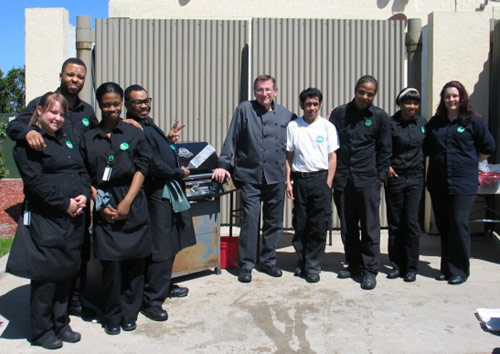 Next, looks like there is an update to the company issued uniform. The old uniforms may no longer be worn, and you'll be issued new ones before the start of your next shift. The cost will be deducted from your next paycheck. Yeah, yeah, it sucks, I know! I feel like we just changed the uniforms a couple months ago. Seems like it, anyway.

Hey, Zach, you look mad. Are you mad? You're not mad at me, are you? Because you know I'm not the guy who changed the uniform policy. God, if only that were within my power. I'd let you guys wear whatever you want. Well, within reason. I mean, I kind of get the whole uniform thing, because it looks kind of sharp to have everyone wearing the same thing, but as long as you guys had, say, a white button down shirt and black pants, it wouldn't really matter to me where you got them! I feel like I'd be pretty sensible in my decision making.

But again, not my call. All I can say is "No more minestrone soup!" Sigh.

Next, well, oh boy, you're not going to like this one. Corporate, and I emphasize corporate, has decided to open the restaurant on Thanksgiving and Christmas this year, and all employees will be required to work. No exceptions. Man, that really sucks. Where do they get off?

Courtney, c'mon. I have to be here, too. This isn't coming from me, I'm just the one saying it. I feel like that's the part that's not getting through to everyone. One minute I feel like we're cool and I can hang with you guys, and the next it's like you guys don't like me and you're pissed at me for all these decisions I have no control over! You guys like me, right? You don't have to answer if you don't want to. Just know that I like you. I like you guys a lot.

Look, I'm just going to level with you. I don't want you to think there's some sort of barrier between you and me. I'm the manager, sure, but I'm also a person. I know you've all gotten pretty close and you meet up after work at Darren's house to party and all that. Oh yes you do, Sean, don't lie to me. Don't lie to my face. I hear you talking about it literally every shift. But every time I ask what everyone is up to after work, it's like, "Oh, just going home," or, "Oh, just gonna watch some Netflix." Why don't you want me to come? You think I'm some kind of narc? I can hang. I'm down for whatever, and I can get just as weird as the rest of you. What happens at Darren's house stays at Darren's house, am I right? I mean, as long as what you guys are doing doesn't violate Olive Garden's drug and alcohol policy, we're cool.

Oh, c'mon. I'M A MANDATED REPORTER, GUYS. I HAVE TO REPORT IT! I could lose my job for not reporting it! Believe me, if it were up to me, I'd be cool with everything. I mean, I AM cool with everything! It's just, there's a manager-subordinate relationship there, and those boundaries have to be respected. No, yeah, I know I just said there weren't any barriers. No, I don't think I'm better than you. I don't know what I'm saying. Believe me, you guys are cooler than I'll ever hope to be. I'm just the manager.

Honestly, I wish to God I wasn't the manager. Just for one day to be with you guys. Today, when we were just crushed with customers, and I had to jump out there and get my elbows dirty in the trenches with you all, I'm telling you I felt alive, truly alive for the first time. You're all very, very lucky to be servers here.

No, Nick, I will not go fuck myself. That's a pretty hurtful thing to say.

Alright, one last announcement to get through, guys, and then those that don't have any side work left can get out of here after they do one last sweep.

Related
Hi, This is Jimmy from Wikipedia and I’m Writing to Ask, One Last Time: Please Consider Paying Me Back for Your Portion of Last Sunday’s Brunch
Josh Lee
Hi, I’ll Be Your QR Code Menu This Evening
Rob Baker
No Surprise, You Just Screwed Up Your Starbucks Order Again
Clayton Moore
Nice One, Dipshit! You Hurt Your Dentist’s Feelings by Saying Teeth are “Just Okay”
Ryan Ciecwisz
Resources