Welcome to the Mall, Please Remove Your Testicles

Like most men, I enjoy getting my penis touched. Whether it's a sweaty hand, drooling mouth, or the warmth of a homey vagina, stimulation of a man's penis is ranked very highly. The only problem with living your entire life around the hopes of arousal though, is you become a slave to your penis. And once you have sacrificed your life searching for a garage to park your stretch limo, you find yourself doing degrading things. And out of all the shameful dates and situations to which a man can succumb, the worst is the mall. 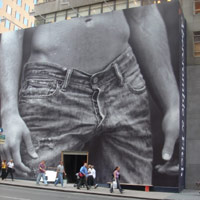 The mall of shame, where your testicles will be provided for you.Now, to all the women reading this, you didn't see 100 male readers wince at the word "mall." That's because all the euphoric, pleasurable experiences women attribute to the mall are contradictory for men. To guys, the mall is nothing short of a battlefield of fallen soldiers, each of them a casualty to their own penis. Each store is a level of Hell, sent as a test to their dedication of getting laid. And these horrible feelings are all spawn from the same scenario I like to call "Puppy Dog Syndrome."

Imagine it: you and a woman are flirting and talking, playing the phone game and hinting towards a second or third date, when one day you get a call asking if you want to go to the mall with her. Surely, you think, a date to the mall could only benefit the greater goal of penis-insertion. This, my friend, is your first mistake. 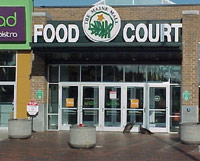 A man's sole beacon of hope in the mall.The mall, in short, is a place where women reign supreme. While men spent their free time playing Nazi-Zombies and fantasy baseball, women were at the mall. Not necessarily to shop, but simply to learn the layout of their territory. This way, when they trick a man into going with them, they know that they have full domain of the area, and are not afraid to assert their authority.

For a man, the mall is equivalent to the mythological Labyrinth: once you enter, you will be stumbling around for hours in desperate search for salvation. The only difference is that instead of meeting the Minotaur, you're going to be faced with a much worse death: woman stores. From the second you step through those automated doors, the waft of Yankee Candle stings your nose. You have reached a sad realization of your fate: you have become nothing but a puppy dog, led on a leash by your new master through this unfamiliar world.

After you have been dragged into the depths of social chaos, you will be towed from store to store by your limp-dick wrist, each boutique stripping you of your inner dignity. You will be mercilessly carted into stores like Forever 21, Wet Seal, and—if your date is feeling especially malevolent—Victoria's fucking Secret. At the end of the date, your manhood has committed suicide and your testicles have conveniently removed themselves and now fit snuggly in her purse.

What's worse than being towed through this gauntlet of stores is the humiliation of realizing that, as a man, you have no style. You watch as these girls shuffle through racks of clothes and sadistically assail ones that you find very fashionable. Their scoffs and sneers tarnish the clothes fashion designers slaved over for months, and you can only stand there in your "Vote for Pedro" shirt and wallow in your own pathetic style. 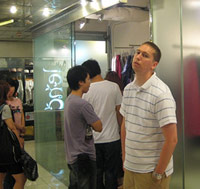 There he is, your fellow man in defeat.Occasionally, a woman will love a piece of clothing so much she must try it on, leaving you to stand outside the dressing room. The following minutes contain the most awkward feelings of self-consciousness any man will ever face. You stand there, lingering in your own puddle of self-pity, as this woman chooses another dress to clog her closet. You look across the store to see another man, his face stained with defeat, and the two of you share a connection of helplessness. You have both been robbed of your manhood in a feeble attempt to wet your tip.

And may God bless the man asked to hold the purse. What cruel, heartless girl would humiliate a guy like that?! Not only does your flower-studded handbag clash with our outfit like a disco ball in the Batcave, but most men don't even know how to hold a purse! Do we slip it under our armpit? Do we twirl it like a lanyard? Shocked by the pure awkwardness of the situation, most men hold it down by their side like a grocery bag of shame as passing shoppers viciously judge our sexuality. 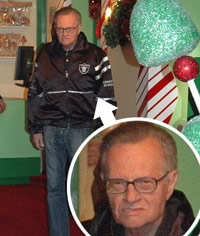 ANY man is capable of having his dignity stolen at the mall.By the end of a date to the mall, most men feel exhausted. Nothing is more tiring than being carted around the mall by your own scrotum in a pathetic effort to get laid. Our ears throb from the music at Abercrombie; our nose burns from the scent of Bed Bath & Beyond candles; and our muscles pound from carrying loads of clothing this girl may never even wear. By the end of the date, we don't even want to have sex anymore. Instead, we cuddle up in our warm bed and cry ourselves to sleep over fond thoughts of our long-lost testicles.