The only Super Bowl drinking game guaranteed to make a fool of you.

What you need: A beer or cocktail for every participant, a copy of Jeff Gassen's Highly Unconventional Super Bowl XLVII Drinking Game sheet, one hurricane cocktail for every table, and residual enthusiasm from when you initially learned Tom Brady wasn't in the Super Bowl.

Every time Ray Lewis marks a tackle for a loss, anybody in a Ravens jersey can award 2 drinks in the event they can do and go through with the Ray Lewis dance or yell, “Only God can judge me!”

After every change of possession from the 49ers to the Ravens, everybody at the table has to say, “Quoth the raven, nevermore.” The last person to say it has to take 1 drink and will likely die in a sepulcher by the sea.

After each Frank Gore touchdown, every drink containing ice has to be finished a la Former Next President of the United States Al Gore's An Inconvenient Truth about global warming.

After every Kaepernick rushing touchdown, take 1 drink for every 10 yards he ran. 10 yards or less is always 1 drink. You can award your drink to someone else if you admit out loud that Eric Crouch was a better college quarterback. 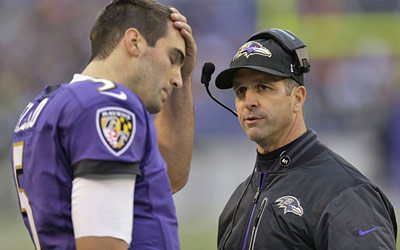 After every Patrick Willis tackle, everyone at the table must say, “What you talkin' about, Willis?” and puff their cheeks out. The last person to do so must take 1 drink if the tackle is at the end of a play for positive yards or no gain, and if it is a tackle for a loss, 1 drink for every yard lost.

On every field goal, each person must clearly state if they think the kicker will make or miss. If you're wrong, you must finish the rest of your drink, unless you can flick a drinking-related object (e.g. beer can tab, folded straw, folded napkin) through the finger goalpost made by the person sitting directly across from you.

For every injury, take a corresponding number of drinks to the number of minutes of play interrupted. The last person to drink isn't allowed to pee until the next injury.

Every table needs a common Hurricane drink which shall be passed round Communion-style after every mention of Hurricane Katrina.

Any puns involving Super Bowl and or Harbaugh/brothers (e.g. Super Baugh, Harbowl, Super Bro, BroBowl, etc.) everyone, with the assumption you haven't killed yourself, should take as many drinks as they have siblings. And may God have mercy on your soul.

During the halftime show, you must take a shot for every estranged non-Beyonce member of Destiny's Child who performs. Anybody who can name any of the other members is exempt from any shots, but should be ridiculed ruthlessly and pressured into drinking martinis the rest of the night/day.

Anybody wasting their time listening to Jay-Z perform should take a shot of the strongest liquor on the menu and start to think really hard about where your life is headed.

During commercial breaks, every time there is a clear instance of “side-boob,” all women take 1 drink to ease the pain of feminist gains being set back another year.

Every GoDaddy.com commercial, dads take 1 drink for every case of sexual innuendo.

Any beer that advertises cannot be ordered after the ad runs.

This article is copyrighted by the NFL for the private use of our audience in the bedroom only. Any other use of this article or of any pictures, descriptions, embarrassments or accounts of the game without the NFL's sober consent, is prohibited.