Is Tyler the Creator the Next Osama bin Laden?

Hey guys, did you hear? Osama bin Laden is dead!!! Yay! We can finally get back to worrying about that earthquake, or that flooding, or that radiation. Actually, let's hold off on that stuff for another week and celebrate the fact that we found and killed a guy that most of us forgot existed. I haven't been this happy since last year, when I found a Kinder Surprise from Easter of '99. 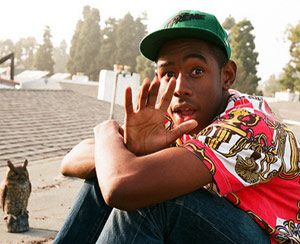 Tyler the Creator, of OFWGKTA fame. If you can't kill them all, at least kill their leader, right?However, with the fall of the most evil man in the world, the country cries out for a new great threat to combat. A new Hitler must rise for us to rally against if we want to stay strong and united—a new threat that can take our mind off of apocalyptic natural disasters, soaring gas prices, and Fast Five.

I nominate Tyler the Creator, frontman of Odd Future Wolf Gang Kill Them All (OFWGKTA) for the position. For those not familiar with OWGWTF, they're an assorted group of teenagers who have been labeled by some (mostly me) as "The Taliban 2.0." Homegrown in California, this group of kids burst onto the scene with their controversial music and videos in 2010 with Tyler as the frontman. They've toured London and New York to sold-out audiences and are known for their destructive antics. Wait a minute…a homegrown group? Controversial? London and New York? Destruction? Oh god…they've begun.

But the "coincidences" don't stop there. If you still don't believe that OGDOFWL is the most dangerous acronym threatening America since IED's, then how do you explain the fact that: 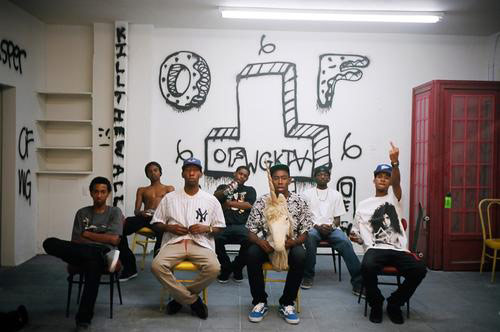 With all of this conclusive evidence, it's pretty hard not to jump to the conclusion that Tyler the Creator is a terrorist who must be stopped before he recruits our youth. If his performances are any indication, the man clearly has no regard for human life. I mean, he hopped on Jimmy Fallon's back! That guy's like 37! He could've ruptured a disk! And that's how it starts: he eliminates late night talk show hosts one by one so he can dominate the 11-12 timeslot with his cave-made terrorist video demands.

Even worse is OFWOMGFTW's subtle propaganda. Since growing in to their fame over the last few months, they've begun used their newfound popularity to spread their disgusting motto: "Swag." To the untrained ear, this may sound like some sort of monosyllabic nonsense, but trained historians will tell you that, when translated into Arabic, it's actually pronounced "Allahu Akba," the war cry used by Muslim warriors, and likely Osama bin Laden.

But hey, now that we have a new target to blame for everything, we can prosper again! Because not only is the next threat to Americans FROM America, he's also not old enough to go anywhere fun. This means that your best bet for safety is to haul your ass down to the nearest casino or strip club and spend as much money as possible to ensure that it doesn't close down. Eventually, all the money you spend there will help the economy recover so we can afford more missiles to get this new bastard. It's simple economics.

Some of you may still be skeptical. You may think that there's no way a 19-year-old can be the "next big threat to America"—and maybe you're right. Maybe he's not a criminal mastermind, maybe he's just a suburban kid with a passion for music. But just in case, I'd like to issue a $45 million dollar reward for Tyler bin Creator.