I house-sat for my parents recently while they were out of town because I had reluctantly agreed to take care of my mother's cat. Being a lover of all animals who prides himself on his ability to ingratiate himself to even the most vicious of pets, one would think that I would have been excited at this prospect. One would be mistaken.

For whatever reason, this cat has it out for me. I already knew that this two-faced little devil was trying to kill me prior to this misadventure, but I agreed to take care of her anyway for my thirty pieces of silver. While agreeing to cohabitate with the dark mistress, as I have grown fond of calling her, might appear to have been (and most probably was) a horrible idea, I remain a sucker for a good meal, and my mother dearest had promised to leave the house packed to the brim with goodies as a last rites of sorts for my sacrifice.

Pictured: The Beast I will not recount the numerous times prior to this occasion that this cat would lure me in by ostensibly offering companionship with a gentle purr or a caress against my leg, only to draw first blood as soon as I let my guard down. Suffice it to say they were many, and I had learned to approach her with a healthy amount of respect. Although I am many times her size, she had the advantage in being invulnerable to any physical harm from me, as I cannot fight back for fear of repercussions from my mother. And believe it or not, a stern talking to was less than effective in quelling her viciousness.

That this was war I had no doubt, and if nothing else, I was going to go out with honor. Or so I thought. Now I'm sure you at some point have been left with chills going down your spine after being stared down by some cat or hearing their evil hiss. Well boo-fucking-hoo for you. The last time I had agreed to stay over and watch this cat, as she in turn watched me, I awoke to her clawing at my jugular, and if I didn't know any better, I would swear that she was smiling while doing so.

As I pulled up to my parents' house, I was too excited thinking of the bounty that lay ahead to fully grasp what I was getting myself into. Upon entering her lair, I immediately went for the kitchen and began to devour with my eyes all the tasty treats that lay in store for me. All of a sudden, there was a blur, and she appeared as if out of nowhere on the countertop. I was face to face with the beast.

I resisted the temptation to feast in her presence in fear of incensing her any further. It brought to mind the old mafia adage of only eating with your back to the wall as a measure of protection. This time, I vowed, I would be prepared, and I would not allow her to get the best of me. I put on my heaviest jeans, old hoody (lest I risk my favorite), and hiking boots as my first line of defense. I enacted all forms of countermeasures, preparing myself for our inevitable battle. I had water bottles at the ready in every room, having studied her during our past engagements for weaknesses.

After three days of détente, my flesh remained intact, but somehow this failed to bring me solace. She had kept her distance, watching me through the mirrors and from the high ground, peering into my very soul and relishing in the terror she had instilled in me. I pondered whether I should restrict her to one part of the house, but I did not want to make myself a hypocrite by practicing the preemptive strike when I had so often spoken out against its use in times of war. That this was war I had no doubt, and if nothing else, I was going to go out with honor. Or so I thought. 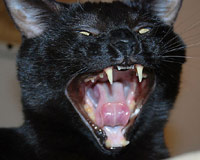 Not Pictured: Death Things had been getting along well enough at this point, or, rather too well. My foe was proving wilier than I had anticipated, and I could not rid myself of the suspicion that something was afoot. Often the anticipation can be worse than even the most dreaded of outcomes, so after three days of stalemate I decided to bate her into action. I began walking around the house barefoot in shorts, leaving myself vulnerable to attack. I slept with my door open, leaving an arm if nothing else above the covers. I even allowed her to sit on the table during one of my meals, positive that the temptation would be too much for her, and she would spring her trap prematurely, allowing me to come out unscathed.

But still, nothing. Paranoia having set in, I had elevated her in my mind to mastermind status, giving her credit for plots and schemes well beyond her capacity. I was sure she was toying with me, and I began to grow weary of the cat and mouse games. Being on the fringes of my sanity, I knew I had to do something, even if it went against my better nature.

I found myself with only one real option considering my frazzled mindset. I left. I went home with my tail between my legs with what little sanity I retained and what was left of my dignity (spoiler alert: none). I left her enough food and water for the remaining couple of days and two extra litter boxes. I was bested by the beast, yet again, and this time she never even raised a claw in anger. I can only wonder, dear readers, if you would have fared any better.

“That’s show biz, kid,” I whisper to myself after making yet another decision I know will make my life worse but definitely more interesting.