The Four Levels of Slut

Sleeping around carries an unfair double standard, but sluttiness does have levels.

Main: Man, she’s a whore?
Nathan: How can you say that? She never got paid.
Main: I stand corrected. She’s a slut.

I think it’s unfair that women are often considered sluts for sleeping around. Women say that this perception of them propagates a double standard because men are never considered sluts for rampant sexual activity. (Although, if that were truly the case, then why do so many women I know call me a slut?) And recently, because I just dumped a girl who cheated on me, I have been pondering exactly what it is that makes a girl a slut.

Now, when I get to pondering, well, sometimes I just have to get out a pen and write down my thoughts. This was one of those times. You see, there are many different kinds of sluts, and there is not one hard and fast rule that simply defines a woman as a slut. But there are (at least) four levels of slut.

Let’s look at them, shall we? 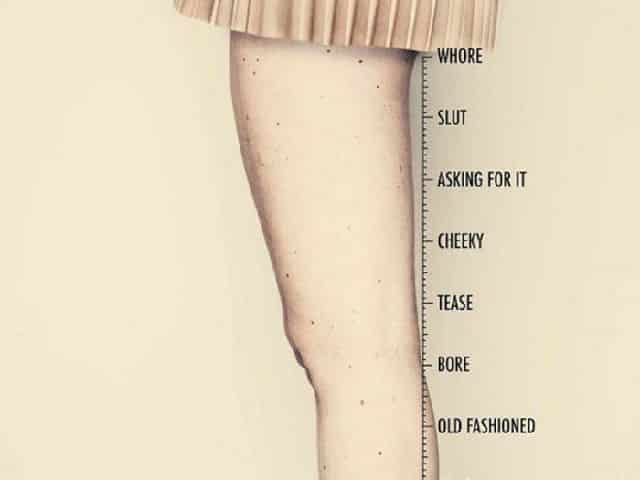 “Sadly, the Cheating Slut is really what most men mean when they say ‘slut' or ‘whore.' The first two levels are just people being people.”

This woman is not technically, by definition, a slut. She is the woman who gets stereotyped as a slut simply because she likes to fuck around. This woman typically has no boyfriend (or a boyfriend who doesn’t care that she fucks other men) and simply goes out looking to get laid. She doesn’t feel that she should have to settle down, and she thinks it’s unfair that other women degrade her for this. She is right. She is also one of the reasons I get up in the morning.

Of the last four women I’ve slept with, three fall into this category because (as far as I know), they were not cheating on anyone, were not lying about who they fucked, and were not asking for anything more than sex. Women love sex, too; they should not be blamed for seeking it. Stereotypes hurt everyone. Ironically enough, usually other women hate this girl because she can fuck who she wants, while men bare her no ill will. She is, after all, simply doing what she likes. And men, for the most part, respect that.

Unlike the whores that make up the second level of slut.

Much like the Sexually Liberated Woman, this slut has no boyfriend. She does however, and for whatever reason, feel she needs to lead men on. She fucks several different men at one time while tricking the men she fucks into thinking that they are pursuing a relationship. Which is to say that every one of the suckers she fucks happens to think that they’re the slut’s soon-to-be boyfriend. She also loves seeing men fight over her, which may be (at least in part) the motivation for her leading these poor bastards on.

The main thing that separates her from the Level 1 Slut is that she is not honest with the men in her life because she derives pleasure from wrapping suckers around her little finger. The women representing this level of slut usually leave me alone. I’m not sure why, but I’m pretty sure the Garden Variety Slut has a radar for suckers, and because I am not one, I hardly have to deal with these bitches.

Cheating Sluts come in three different categories. There are those who simply cheat on a boyfriend they’ve had for a few months and then tell him (no big deal); those who cheat on a guy they’ve dated for a few months, never tell him, and force him to find out from his friends (a slightly bigger deal because these sluts lack honesty); and then there are the worst kind—the sluts who fuck around on a man they’ve been with for years and never tell him about it.

The first girl I fucked after the breakup belonged in last category. The bitch was engaged. She fucked me late in the afternoon and left early in the evening because her man would soon be arriving from work. To her fiancée, I say, “I hope your parents are proud of you for preparing to marry a 21-year-old waitress with no education. Oh, and by the way, I’ve never met a girl who had a tell for her female ejaculation before. I mean, her leg quivers like an epileptic in mid seizure and then she squirts. That’s kind of weird. And yes, I like her body, too.”

Sadly, the Cheating Slut is really what most men mean when they say “slut” or “whore.” The first two levels are just people being people, not people being disloyal bitches. What separates this level of slut from the fourth and final level of slut, is, quite simply, the motivation for cheating.

Fortunately for me, I live in a college community where finding a man with his own car, no roommates and a steady income is like hitting the jackpot for most girls. Unfortunately for me, this means I often get hit on by the Money Grubbing Slut.

The saddest thing about the Money Grubbing Slut is that she really does like (or even love) her boyfriend. She simply expects more from her man in terms of monetary consideration. She doesn’t make her own money and can’t live off her boyfriend’s petty McDonald’s wages, so she seeks out men who will take her to nice places and buy her shiny objects. This is the worst kind of whore because she’s pissing on love and respect all in the name of a few dollars.

I love promising this girl I will take her some place nice, then fucking her and ordering a pizza, explaining to her that I’m broke. After this, I can usually count the seconds until she leaves, feeling used. Then I double check my wallet; you can’t trust a Money Grubbing Slut (at least, not until she starts making her own money, in which case, the nickname gets changed to “Materialistic Shark,” which is unfair—I mean, why blame a girl for wanting money and making it?).

So guys, the next time you take a woman home from a bar, or fuck her in the bathroom at a party, or on the rooftop of a shopping mall, or in the grass median on the side of a highway (you know, whatever works for you), you may want to consider exactly what level of slut you are fucking. Remember, it’s not wrong if it’s just sex for sex’s sake (hell, female sexual liberation was the best thing to come out of the women’s rights movement). But if she’s in a relationship with some other guy (or guys) when you first fuck her, odds are she’s not the kind of girl you want to spend six bucks on.

Then again, few women are worth six bucks.

More Like This
Peloton Instructors Coach You Through Your Mediocre New Year’s Resolutions
Leah Abrams
I’m Bob from the Bob’s Red Mill Grain Bags, and I Want to Inhale a Family-Size Bag of Flamin’ Hot Fucking Cheetos
Seth Sawyers
Quiz: Is He Ghosting You or Is He Ghostface from the “Scream” Franchise?
Carrie Pinkard
Comedy Courses

I’m not a life coach yet, but I was recently promoted to assistant life equipment manager.

Peloton Instructors Coach You Through Your Mediocre New Year’s Resolutions
Leah Abrams
I’m Bob from the Bob’s Red Mill Grain Bags, and I Want to Inhale a Family-Size Bag of Flamin’ Hot Fucking Cheetos
Seth Sawyers
Quiz: Is He Ghosting You or Is He Ghostface from the “Scream” Franchise?
Carrie Pinkard
I’m Getting Different Wordles than Everyone Else and It’s Not Going Well
Natalie Mead

I’m Getting Different Wordles than Everyone Else and It’s Not Going Well
Natalie Mead
I Beg of You, Please: Don’t Order a Medium Soda
Calder Holbrook
January’s Poor Performance Will No Longer Be Tolerated
Becky Green
A Ranking of Pigs by Whose Heart I Most Want as a Transplant
Benjamin Alpert