>>> The Rollercoaster of Drama
By staff writer Simonne Cullen
August 28, 2005


Every meal plan in every college is the same. Pay twelve to fourteen dollars for essentially what is meat that has been stewed way past it’s expiration date, and Colombo yogurt—even though the company went out of business three years ago (apparently there was a great deal if you bought in bulk on Overstock.com). Just the smell of the food makes your mouth go dry and your endocrine system quiver with fear. If Tuesday’s meatloaf equaled throbbing gas pain, then Thursday’s chili just might eradicate the small portion of the intestines left unscathed by Monday’s double meat lasagna. Which is why, besides the safe and painless weekend brunch, we turn to pizza, Chinese food, cold beer, and—lest we forget the most essential food product—the glorious and irreplaceable Instant Ramen Noodles…which by the end of first semester will bestow upon you their parting gift: not a unique and unforgettable bowel movement, but a few extra pounds. Fifteen to be exact.

Of course if you’re looking for an alternative kind of socializing besides the ever popular frat party, and you find the socialites of the first floor library lacking in stimulation and quality, there's always the recreational workout room at the school gym. There you will find everyone in your school from hardcore athletes (who lower your self-esteem when you wearily dismount the treadmill after twenty minutes of mall walkers pace, while they continue on for another thirty at jack rabbit speed), to sorority girls (who all attempt to intimidate everyone in their matching magenta jogging suits), to the chubbers (who are really there to lose their high school fifty before the freshman fifteen permanently attaches itself to their aorta). The gym that was once supposed to be a safe place for students to go work off some steam, tone muscles, and lose some baby fat without judgment has become so cliquish it’s beginning to look like a bad teen movie: Mean Girls II: Leaner and Meaner, which, if Lohan didn’t look like a saggy coked out skeleton, would actually be a legitimate sequel.

“What the fuck is the body fat test? Pinch my skin, multiply by thirty, divide by everlasting humiliation, and subtract more money from my wallet. AWESOME!”

So I guess there are some occasions when the school gym may not be the most ideal place to burn off a couple of extra calories. At that point, it’s time to head to the local YMCA that will offer you a discount for being a college student. And while you may not be able to use the pool, at least you can continue your Sunday night “treadmill walking while watching a new episode of Charmed” routine in peace and without judgment. Or, if you’re in an urban environment, Bally Fitness Centers are like Starbucks: on every corner, a smidgen overpriced, and packed with young professionals ticking away on their laptops and making conference calls. Seriously.

What annoys me most about going to the gym are the girls who arrive with their make-up applied flawlessly, and their hair shining spectacularly in the incredibly flattering fluorescent lighting. Now if you’ve read my articles or know me personally, you’ll know that I am no expert on picking up guys, nor am I able to give any valuable advice in the relationship department, but isn’t the gym a place where you can just let yourself go for a couple of hours? A place where you can just pedal away in a spin class without worrying if the person spinning next to you can smell the sweat dripping down your backside? A place where you don’t have to be concerned about your complexion because no one there is attempting to pick you up? Apparently not, because at this new gym I joined, it’s pretty people only. The overweight people are all herded up like cattle, strapped to the treadmills in a small corner, away from the windows, and pestered by the employees to buy tanning packages—possibly to turn their skin to a nice russet color before they’re all prodded into the backroom and turned into baseball gloves.

I’m not trying to disrespect the overweight population, I’m just trying to explain that the gym I go to is the devil incarnate—and of course I was roped into signing up because of a hot guy who supposedly went there. Instead of a potential relationship, what I got was a fifteen month contract, five months of personal training services, and the hot guy’s four demon brothers grinning at me smugly every time I come through the doors in my doors sorority jogging suit, laughing wildly as I attempt to figure out. There’s this one version of a stair climber that’s just like a four foot escalator that goes absolutely no where. I believe the only reason it’s there is to further humiliate anyone who attempts to turn it on, because no matter how careful I am, I always end up with my back side on the floor and my legs sprawled over my head—and it doesn’t even get me drunk.

So after I unconsciously selling my soul over to what I was told would be a breakable contract, but later found out (after three very angry and one sobbing phone call to their corporate office) was not, I was given a personal trainer. Rick. Rick wants to be an actor in Hollywood. But if Rick wants to get an acting job, he’s going to have to buckle down and grow a neck first. Maybe this is just the concussion talking, but I don’t care how well defined and muscular a man is, if the guy’s got no neck, then the escalator from hell machine has a better chance of scoring with me than he does. 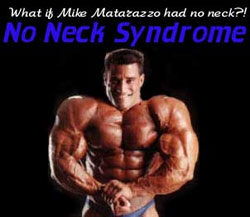 So because I can’t stop staring at how awkwardly his shoulder flows into his face, I obviously can’t take him seriously. Especially when he begins showing me the proper way to do squats; that’s when I notice his butt crack gets a little hungry and starts eating his mesh shorts. It honestly looked like he was double fisting two beer cans and getting on and off a recliner, only his shorts were getting tighter and tighter as his ass crack grew more and more hungry. I looked around and took a mental note that no one in the place found this side show as hilarious as I did. The pretty people kept on flexing and popping laxatives, while the fatties in the corner pleaded for someone to unstrap them. Because this situation was completely normal (comparatively), I tried really hard to compose myself, figuring all the embarrassment was his own doing, until he made me take the body fat test.

What the fuck is that? Pinch my skin, multiply by thirty, divide by everlasting humiliation, and subtract more money from my wallet. AWESOME! But the time had really come for Rick to go the moment he asked if I would feel awkward if he pinched my breast fat. “After all, I’d like to get an accurate screening.” Yes, no-neck Rick, I would feel slightly discomforted—after all, the stair machine nearly knocked me up an hour ago, and then I had to watch your fanny eat your shorts for lunch. Now you’d like to cop a feel in the name of body fat percentage? I came here for the opportunity to have a couple of random chance encounters with the hot guy I like, not to be felt up an Italian Arnold Schwarzenegger wannabe.

Two days later I found out that hot guy had a girlfriend, and two weeks later, I quit my job. No longer able to afford this gym expense, I decided to cancel my membership. I was told to call up the corporate office where I was then told and retold several times, that I had not signed my soul over indefinitely, but had in fact signed over the forty dollars left from my graduation money, and anything else left in my back account. I spent an hour arguing with these people on the phone. What would you like me to pay with lady? Monopoly money? Because that’s all I have in my wallet right now! And I’m not gonna to lie to you, it’s mostly there for show until two o’clock when I have to pay my rent to the owner of Boardwalk.

So now I’m stuck at this gym for a whole freaking year unless I move somewhere out of state. The one good thing that came out of this for me was that this particular gym has over forty Chicago locations. Now I no longer have to face hot guy’s four brothers or run into no-neck Rick every other day. Instead, I go to one a little closer to my house, and have even ditched the sorority letter jogging suit. But somehow, I still feel like I’m being judged when I walk in there—because that’s what people do at the gym: they look at other people and say either, “I’m skinnier than her, I can go eat a doughnut after this.” Or, “Maybe I should stay strapped to this treadmill a little bit longer.” Or possibly, “My neck seems to be sinking into my Frisbee-sized pecs. I’m making excellent progress.”

More Like This
I Am the Old Man on the Stationary Bike at the Gym, and I Am Here to Fucking Crush It
Lizzie Logan
Natural Deodorant Didn’t Stop Me From Sweating, But It Did Stop Me From Raising My Kids
Sarah Vulpio
Resources