The Royal Wedding: There's an App for That

NBC News knows you care about at least one thing in the world!

No seriously, there is. While flicking through the "What's Hot" section of Apple's App Store for something to distract away a few more moments of this life, I came across an iPhone application called "The Royal Wedding," which, as described in the info section, is a "one-of-a-kind news app" and "an engaging way to experience all the news leading to the Royal Wedding and a social tool for the day itself." And I am sure there are no lack of social tools downloading this app. 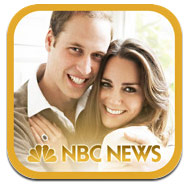 "Who would make a Royal Wedding App?" you may query. I might retort, "A person with an astonishing deficit of character and probably a very real grasp of the mind of the American public." But I would be wrong, because it's not a person but rather an entire organization: The NBC News Division.

Also download: “Angry Birds: The Streets Will Run with Blood – Angry Khadafi Edition”To find it, just search The Apple App Store using the keywords "nbc news." You will need to sort through other NBC Apps, like "NBC News: National Debt Calculator" (which allows you to look at the national debt and see where your money is going), "NBC News: Aid to Japan App" (which allows you to look through a list of humanitarian organizations you can make simple click-to-donate donations to on your iPhone or iPad), and of course, "NBC News: Planet First App" (which shows local eco-friendly businesses in your area selling Earth-friendly products or locally grown produce, or any other business doing their part to reduce their carbon footprint).

Oh wait, just kidding, you won't need to do any of that because NBC News didn't make those apps. Don't worry, the only app that appears when you type "NBC News" is an iPhone application that allows you to explore your voyeurism with photos of the royal family, a royal family tree, ideas for hosting your very own "watch party," and naturally, access to NBC Universal Online Store to purchase your very own, Chinese-made, American-owned, fake royal memorabilia. An app so royal it makes you feel like you're wearing nothing but a gold crown and a robe while hate fucking William the Conqueror in Piccadilly Circus and drinking a cup of Earl Grey. Hot damn, you're coordinated! 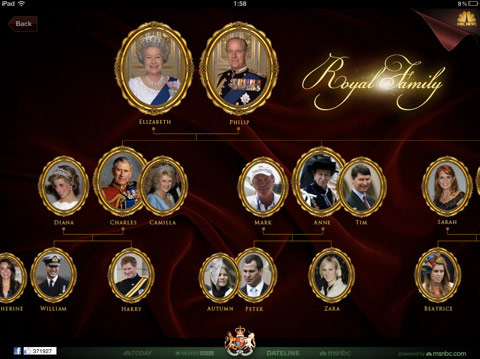 Try the new "What Would the Baby Look Like?" Royal Incest Mix-n-Match game!

As long as NBC News is attaching their name to meaningless shit, I figured I would pitch a few apps that may turn a profit.

Is your dictator a dick? Ashamed of your Shah? Pissed at your president? Wanna set fire to your foreign occupier? Tired of not having an app that enables you to do something about it? Well here it is (finally)! An app for all your disenfranchised middle class needs! Have your Jihad in a jiffy!

Tired of being told addiction is a horrible and sad disease? Want to condemn Charlie Sheen or Lindsey Lohan in order to validate your banal existence, raising yourself up on a pedestal of self-righteous ecstasy? I bet you do, chubby! This app is for you!

Tired of being consumed by the gigantic disparity of wealth in this country? Tired of thinking, "Hey, General Electric gets all the benefits of an American company but doesn't pay a dime!" Well look no further, class warrior, here's a distraction from all that!

More Like This
The Unexpected Things That Will Happen When You Buy Those Used Bagpipes on Facebook Marketplace
Kurt Zemaitaitis
List: Words That Mean Totally Different Things on Craigslist Apartment Ads
Justin Kaplan
I Am a Giant Asteroid Heading Towards Earth After the Horror Show That Was 2016: Ask Me Anything!
Michael Ferro
Comedy Courses

Gravity was its own downfall.