On January 9th 2010, something truly unbelievable was unveiled at the AVN Adult Entertainment Expo in Las Vegas—something that may actually change the criteria people use when looking for a companion. A company has developed "the world's first sex robot," a life-size rubber doll designed to engage the owner in conversation rather than actual lifelike movement.

Because nothing says "alive" like a robot with a cold dead stare.You read that right, people, despite the fact that Roxxxy the robot is connected to a laptop computer via cables coming out of "its" back, Roxxxy still demonstrates a level of sophistication that falls short of a child's talking toy. Apparently, it can't move on its own at all, but it does have touch sensors at strategic locations and can sense when it's being touched by its owner, responding with phrases like, "I love holding hands with you." The laptop also presumably comes with the game solitaire in case you would rather kill your "alone time" some other way, or maybe just couldn't get an erection while staring into the eyes of a lifeless freaky robotic talking doll.

One might presume that the demographic most excited by this new development is 50-year-old, lonely, balding men who can finally stop raping their sisters' childhood Chatty Cathy dolls and give something new a try for a change. However, in an unprecedented turn of events, women around the globe have been the most vocal champions of the New Jersey based company's efforts. Roxxxy is rapidly becoming the spokeswoman…er spokesthing…for this new decade's feminist sexual revolution. 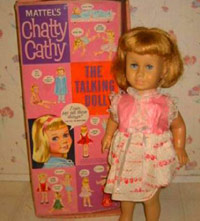 Chatty Cathy says, "The first sex robot MY ASS!"Once and for all, Roxxxy is single-handedly—or rather, silicone-handedly—clearing women's names of the heinous accusations laid upon them by men for years: those of being lifeless robotic loudmouths in the sack. One woman who wishes to maintain her anonymity was quoted saying, "How can those accusations be true if this is the world's ‘first' over-talkative lifeless sex robot?" Another persecuted lady chimed in with, "Yeah, you men think we do nothing more than just lie there and talk your ear off? Well Roxxxy will show you what that really means for a change! You go girl!…er thing…um…. You go miss thing!"

SHALL WE PLAY A GAME?Douglas Hines, founder of the company True Companion, wasn't intending on creating a revolutionary robotic feminist icon but rather hoped to reach certain specifically targeted demographics with his new invention. Not only did he want to market to yesteryear's doll-fucking perverts, but the doll-fucking perverts of today as well. Roxxxy can carry on simple conversations, so the real aim is to make the doll someone the owner can talk and relate to in 140 words or less, kind of like a fuckable Twitter account. The phrases that were demonstrated were prerecorded, but the lifeless robot will also be able to synthesize phrases out of just words and sounds, because apparently Hines was a fan of the movie War Games and it always bothered him that Joshua's voice was male. It is suspected that even after Roxxxy's creation, Hines still gets hard whenever he hears, "SHALL WE PLAY A GAME?" regardless of the gender of the voice saying it.

Sir Alex Ferguson says, "Now the fans really ARE lifeless!"Demonstrating that Hines really does have his finger on the pulse of "normal" men everywhere (you know, the ones who want yackety lifeless women in bed), he went on to demonstrate the range of phrases that will appeal to his target demographic. Since Hines and many other "men" are soccer fans, Roxxxy can already discuss Manchester United, adding the extra bonus of counting the resulting conversation as technically a lesbian encounter involving TWO brain dead girls. In addition, oddly enough, Roxxxy can also snore, because "normal" men everywhere love it when a woman won't even shut the hell up when she's sleeping. Yes, Roxxxy may not be able to move on its own, even to turn its head or move its lips, but by god she can keep you up all night snoring, and clearly that's what men everywhere are looking for in a True Companion. Am I wrong?

Hines, a former artificial intelligence engineer at Bell Laboratories, said, "He was inspired to create the robot after a friend died in the Sept. 11, 2001, terror attacks. That got him thinking about preserving his friend's personality, to give his children a chance to interact with him as they're growing up." And apparently fuck him if they want to. When asked if his inspiration was a little morbid and bizarre, someone at the convention simply replied, "Didn't you hear him? He's doing this for his friend's children, don't be so disrespectful to his memory!"

Stuck on you, I've got this feeling down deep in my soul that I just can't lose.When Hines was looking around for commercial applications for artificial personalities, he initially thought he might create a home health care aide for the elderly, until he remembered that old people can't even use a microwave let alone figure out what to do with a fuckable, lifeless, robotic, health care aide blathering on about Manchester United. Hines said, "There was tremendous regulatory and bureaucratic [health care] paperwork to get through. We were stuck, so I looked at other markets," where we could capitalize on the feeling of being stuck in something.

In order to ensure the robot's capabilities and vocabulary are up to date, the laptop will receive updates over the internet from time to time. Hopefully this includes regular virus software updates, because nothing is worse than a completely fake woman with a very real virus. Roxxxy even comes with wireless internet connectivity for those "on the go" robot fuckers who hate being tied down to one location.

There are NO hot spots when you're fucking a robot!What's more, if it wasn't creepy enough that you're fucking a robot at home, Roxxxy can even dispatch loving email messages to her owner when he is away at work. Yes, Roxxxy comes with all your traveling robot fucking needs in mind; now all you need is a "hot spot." But don't worry, Roxxxy comes programmed to know where all the best hot spots are. Although, technically, since she has an internal cooling system and she is a FUCKING LIFELESS ROBOT RESEMBLING A COLD DEAD CORPSE, all her hot spots are really "cold spots," making the pun sort of inapplicable at best.

Hines is charging somewhere from $7,000 to $9,000 for the robot, including the laptop, and expects to start shipping in a few months. Owners will be able to select different personalities for Roxxxy, from "Wild Wendy" to "Frigid Farrah," depending on one's preference. It is important to point out that Wendy Andreiev and Farrah Fawcett are both in fact now just as lifeless as Roxxxy. However, fucking a dead woman is really what Roxxxy is all about; besides, it would be disrespectful if they called the personality "Deceased Diana" or something.

Regardless of your personality preference in deceased women, however, one thing is clear: Roxxxy is changing the way the world thinks about sex robots. Before, we thought sex robots were for creepy, perverted, demented, doll-fucking degenerates without the social skills necessary to get a REAL woman to even think about sleeping with them. Now, Roxxxy has made us all realize that those same exact guys are apparently ALSO fans of Manchester United. Unfortunately though, that doesn't make them any easier to talk or relate to, since they're still creepy, perverted, doll-fucking degenerates, regardless of what sports team they like. And to think, just a few weeks ago I was acting pessimistic and expressing my disappointment in the progress of the human race. Silly me.