Jesus materializes on the White House lawn to announce his plans to run for U.S. president in 2012. A press conference is summoned.

Reporter #1: So Jesus, what is your stance on gay marriage? 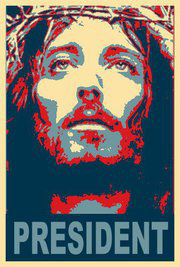 Jesus: I plan to pass a nationwide ban on all marriages once elected.

Jesus: Look, marriage is all God this and God that… well guess what: I AM God. So you can either marry ME or you can go screw yourself and die alone. You wanna sleep around? Fine, go for it. You wanna shack up with somebody? Cool, whatever. But your marriage ain't sacred unless it's with me. So unless I'm banging your wife later, I don't wanna hear about it. Next question.

Reporter #2: What do you plan to do about all the crime in the nation?

Reporter #2: Well for one, drug use is on the rise.

Jesus: So what? Drugs are cool. Why do you think I made them?

Reporter #2: But they're illegal.

Jesus: Man's law. All drugs will be legal once I'm president. Hell, I'm high on angel dust right now. Anybody got a problem with that? Because that would be blasphemy. Next question.

Reporter #3: What are your plans for fixing the national deficit?

Jesus: What, besides selling drugs? How about all the royalty money I got coming from every Christian bookstore and televangelist in the country once I take them all to court. Next question.

Reporter #4: Will you be funding the space program at all?

Jesus: I can instantly astral project to anywhere in the universe at any time for free. So no.

Reporter #5: How do you plan to bring about peace in the Middle East?

Jesus: I play golf with Mohammed every Thursday. He doesn't get it either. So I guess it will go on as long as you want since you guys seem to like war so much. We didn't tell you to invade anyone or blow anything up, though. That's on you guys. Next question.

Reporter #6: What's your stance on abortion?

Jesus: I'm okay with it. Plus, more abortions equals less welfare. I also support strip clubs, pornography, hookers, and birth control. Who else has a question?

Man in baseball cap: Will the Cubs win the series this year?

Jesus: I don't do sports requests. Next.

Man in priest outfit: What are you going to do to stop Satan?

Jesus: Nothing, we're friends. He taught me how to play guitar. Next.

Man in KKK uniform: How do you plan to stop interracial dating?

Jesus: I'm sorry, was that a real question?

Man in KKK uniform: We have to preserve the purebred Aryan bloodline from being corrupted by the negroes!

Jesus: I got two words for you, pal: black pussy. You should try it sometime.

Man in KKK uniform: But the colored people are takin' over! They're tryin' to— (head explodes, flock of doves flies out of neck stump)

Jesus: Are you done? Good. And now I'd like to introduce my running mate, Black Jesus.

Jesus: So if that's all, I guess I'll see you guys in November.

Jesus and Black Jesus hop onto the backs of their winged velociraptors and fly off into the sun.