CrossFit is a Cult

The sad story of a man who chose CrossFit over his fiancée.

Did you hear the one about the woman who was engaged to a man who decided to marry CrossFit instead? Settle in, I'll tell you her story.

So a friend of a friend got engaged to a very nice man. To prepare for their wedding she told him he needed to lose some weight. She enjoys running 5Ks, 10Ks, marathons, etc. He enjoys Netflix binging, 11pm pizzas, and brewing his own beer. Obviously I am closer to him than I am to her. Regardless, he said he would lose a few pounds so he joined CrossFit on a recommendation from his older brother. Seems legitimate enough. A simple man on a simple quest to look good for his lady—until he got addicted. 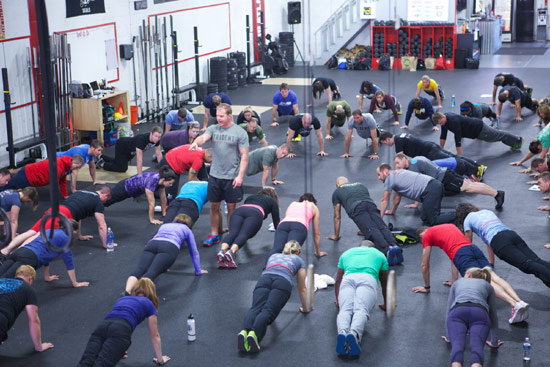 He started going to CrossFit after work. It started out twice a week, but he loved it so he started working out three times. Then four. Then five. He was leaner, toned, and significantly less hairy. (Someone told him to wax his back hair so he wouldn't stick to the floor mat.) BUT, he was noticeably absent from his tight social circle. He bailed on trivia night, would miss Monday Night Football, and neglected his craft beer hobby to the point where the machinery turned so moldy that he tossed it all into the garbage bin and replaced it with an over-the-door pull up bar. Worst trade ever.

His parents unfollowed him on Instagram because really, how many pictures of your son lifting barbells do you actually need to see.His fiancée noticed his dedication and appreciated his more defined torso, the absence of his second chin, and the fact he could haul the groceries from Costco up four flights of stairs without stopping. But then one lazy Sunday afternoon in lieu of sexy time he opted for extreme lunging and 1000 burpees. Which is the rub of the story, folks. Sex is a workout in itself. Probably the best exercise you can do. Never trade it in for repeatedly flipping over a John Deere tractor tire down a vacant alleyway.

So his friends kept inviting him over for a brew or two. They were trying to get him back on the righteous path of Frisbee golf and ten dollar buckets of PBR, but their attempts were thwarted by thinly veiled threats; "If you want to see me so bad take a CrossFit class with me. Trust me bro, it'll change your life!" or "Dude, I know I'm missing the Super Bowl, but it's VIDA day at CrossFit. The whole crowd is here!" What crowd? Your new crowd of CrossFit refugees plucked from their own friend circle and thrown haphazardly into this slave pit where you don't even know each other's names and instead reference each other by your most pronounced physical trait? "Eight pack, Deltosaurus, and JPV? (Jugular Pulsating Vein)" These are you friends now? Well, in that case piss off. Where's stretch marks, and food baby? They know how to party.

Not hosting their annual Super Bowl party really put her over the edge. She asked him to cut back on CrossFit. He refused.

At one point they were planning their vacation around it. A romantic roadtrip up the coast, stopping every day at 5pm in whatever town had the best CrossFit gym. At one point, they drove 50 miles out of the way so he could go to pound town on kipping pull-ups. She was on the verge of a CrossFit intervention when she scrapped it for an ultimatum instead. She said, "No more. I can't do this. It's either CrossFit or me."

And he chose CrossFit.

The wedding was off.

No one has seen him in person since early March of last year. Even his parents unfollowed him on Instagram because really, how many pictures of your son lifting barbells do you actually need to see before he's not your son anymore? Twenty. The answer is twenty.

CrossFit preys on the lonely and those with low self-esteem. "Psst….Hey you…want to feel good about yourself? You want to be thinner? You want to surround yourself with sexy singles who like to get physical? You want to be broke and lose contact with your real friends? You want to constantly talk about your new habit with everyone you interact with to the point where it's the only thing you can think of morning, noon, and night? Well then I have just the thing for you. It's called cocaine….I mean CrossFit. Sorry, I get the two mixed up more than you would think.

CrossFit is a cult. It's not the bumper stickers. It's not the color coordinated work outfits. It's not even your friends who are members who mention CrossFit more than their gluten allergy. It is my co-worker who approached me in a gym to tell me that I was squatting incorrectly. I don't want to brag but I have been squatting over toilets since I was 8 years old. I can do it in stilettos. I can do it with a drank in one hand and a purse in the other. I can do it the dirtiest European port-o-potty in the middle of a techno rave, on shrooms, while expertly waving around glowsticks. If there is one thing I have mastered in this lifetime, it is the art of squatting and picking a husband who prefers sex to sets.

Related
Crossfit Funeral
Evan Allgood
I Got into CrossFit but I Already Told Everyone I Know—Should I Quit?
Mac Faber
Resources