Part 2 of 10 in a "Best Picture" dog/human conversational series.

Here's the next installment in a series of panel discussions in which I and my roommate's German Shepherd, Luther, review the ten films nominated for Best Picture this year at the Academy Awards. Today, Luther and I review Daren Aronofsky's Black Swan. 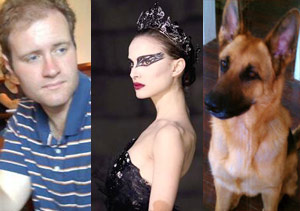 Charlie: Welcome to the program. Today we're going to be talking about Daren Aronofsky's Black Swan, a sort of metaphysical drama/thriller that features a lot of the same familiar themes we're used to seeing in Aronofsky's films; deception, altered reality, the supernatural, and self-destruction. Thanks to a strong cast and superb direction, Black Swan stands out for me as one of the top contenders for the award this year.

Luther: Can we talk about the fact that there are no swans, geese, or frankly any other water fowl in the film? Charlie: Let's just stick to the cue cards, dog. All you have to do is read them. (Points) "I agree, and Natalie Portman…" You pick it up from there.

Luther: Aaarrooo!?!? ("What I really think we should be talking about is the fact that the United States government planted weapons grade demolition charges on the 92nd floor of the World Trade Center…")

Charlie: I have to apologize for my partner here, someone sent him a YouTube video last week called "Loose Change" and he hasn't shut up about it since. All I'll say is this: if the 9/11 attacks were a deliberate and coordinated effort by members of the United States government, this country would never be able to recover from that. It's just too far-fetched and there isn't remotely enough valid evidence to suggest that any one of these crackpot theories has any merit whatsoever.

Luther: Arroo???!!!! ("Look man, if you want to be a sheep, that's your business. Just don't say I didn't warn you when it all comes crashing down. They killed Pac and Biggie, too.") 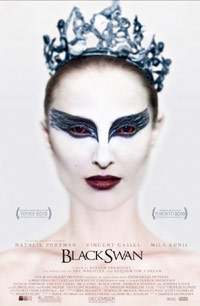 Charlie: Okay, I won't say you didn't warn me. Getting back to Black Swan, this film is extremely "meta," with everything happening plot-wise reflecting the story of the ballet from which the film draws its name, Tchaikovsky's "Swan Lake." Natalie Portman's Nina is the ideal white swan, beautiful and graceful yet naïve and innocent, yet throughout the progression of the film her character, and the world around her, change in striking ways.

Luther: Arrooo??!! ("I agree that it was a strong performance, but I think special mention should go out to Vincent Cassell as the nurturing and supportive choreographer who refuses to let Nina give up on her dreams. He's the kind of character you just don't see in movies anymore, someone who is just genuinely good and wears his heart on his sleeve.")

Charlie: Uh, what the hell are you talking about? He was a perverted, forceful demagogue imbued with a sort of grotesque sensuality who takes advantage of Nina's repressed sexuality. He molests her, degrades her, and exploits her to extract his idea of the perfect performance from her. His interference in her world precludes its destruction. He's not some Jaime Escalante type guy.

Luther: Arrooo??! ("That guy was a fucking rockstar, that's all I gotta say. Also, can we talk about the fact that there are no swans, geese, or frankly any other water fowl in the film? I sat in my seat the entire time like a good boy and not one bird.")

Charlie: I'm pretty sure it was meant to be a metaphor, and I'm almost positive the only reason you "sat in your seat like a good boy" is because you were promised some graphic lesbian sex. I remember the way you reacted to a similar scene in Aronofsky's Requiem for a Dream…

Luther: Aarroo??!! ("Probably one of the top five ass to ass scenes in mainstream cinematic history.")

Charlie: I can't imagine there's more than one.

Charlie: Please don't. Anyway, Black Swan is certainly one of the most original films released during 2010, and it certainly deserves some awards recognition come Oscar night. Tune in next time when Luther and I review Christopher Nolan's multi-layered action thriller, Inception.