The Clusterfuck Saga, Part 3: How I Broke My Leg So Bad I Got Stuck in a German Hospital

The final chapter in the German surgeries from hell.

Now for the next part in the Clusterfuck Saga…

Six hours. That's how long we waited in the emergency room.

I had called ahead the day before to ask about how exactly I should go about transferring since my hospital was being a bag of just, the fattest dicks, and I was told "just show up in the emergency room" and they would admit me and get me a bed.

They were out of beds. For non-emergency patients at least.

Gasping for breath, I slammed the "call nurse" button many, many times. And kept pressing it. Nobody came. Bang up job on that one, guys.

Well, I got an appointment with a senior orthopedic doctor on Monday (it was Saturday), and then went back to the hotel my mom was staying at. It was alright.

On Monday I got confirmation that my leg not only hadn't been lined up properly, but apparently had been broken in a way "that you don't learn about in text books. Nobody gets taught how to deal with something like this." Which is just so inspiring to hear, I'm thinking of getting it tattooed right on the part of my brain responsible for sarcastic remarks (which in me is honestly the whole brain).

Another orthopedic specialist was brought in whose sole professional life was devoted to ankles (seriously) and even he gave the scans a wide-eyed look.

I was given two options: 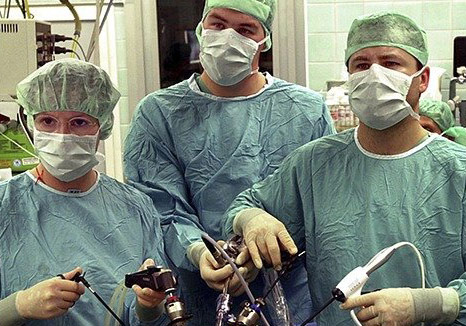 Yeah, that was my reaction too (I can see you through your monitor. Yes all the time. Yes, I saw that thing with the peanut butter. Yes, I'll admit, that was kind of hot).

So, I was told to go chill in my hotel until we would get me ready for surgery.

During this time I had to both administer my own shots of Fraxiparine (blood thinner, nothing fun), and clean my own horrific metal-stick-in-leg related leg wounds. It is not something I would suggest you do recreationally.

So that time came and went with little to no fanfare, and I was eventually admitted to the hospital for my actual, honest to God final surgery. By this time, my dad had come over to join the party, because my mom had already been there for weeks, and would have to go home after my surgery, and it was decided that someone should be there to help my crippled ass out of the country.

There was no sitting around and waiting this time. I went in early in the morning, and was under the knife pretty soon thereafter.

I wasn't told until later, but the surgery did not go well. Just like my last surgery, this one was scheduled to run between 60 and 90 minutes, but wound up clocking in at just under 300. Converted from metric, that's a fuckload of minutes.

The surgeons freely admitted it was worse than they thought, and even after ripping out part of my hip to replace the shattered joint (shattered into almost forty pieces. Fuck yeah high score!), they were still unable to get it perfect, and at this point it would be impossible to get it perfect. Because holy shit. I could get into the details, but I won't here.

Besides, the details got pretty fuzzy on account of all the panic attacks I was having.

A name like "panic attack" conveys a pretty specific image. You panic, and flip out. But it's not always so simple. You can be perfectly calm, mentally speaking, and your body can still totally decide to try and cap its own ass.

The first time was just a bit out of surgery, and only lasted around a half hour. But the problem is, once the attack has started, having been told previously that your surgery could have strong complications does not, in fact, do much to help your brain fight off a panic attack. But it eventually went down.

The second one, though…

You see, one of those complications that I was warned where a serious possibility, where embolisms.

Take note, kids, this will be important in a second.

So, the day after surgery, I was recovering (in theory), and out of nowhere, I found that I couldn't breathe. Gasping for breath, I slammed the "call nurse" button many, many times.

And kept pressing it. Nobody came. Bang up job on that one, guys.

I couldn't talk, really, so eventually my roommate started yelling to get someone in there because at this point I was twitching around pretty good. They eventually came, but their bedside manner left… a bit to be desired.

A doctor and several nurses where eventually brought on, and after checking my vitals and whatnot, it became quickly apparent that I was having extreme hyperventilation induced by a panic attack, and was in no actual danger.

Nobody bothered to inform me of this fact.

I was told only, "Just breath normal." Really. The only English speaker (and his English was pitch perfect, so it wasn't any miscommunication) just told me to breath normal. Like it wasn't already a thing I was considering attempting at that point. At least he was better than the German speakers.

Now you see, at this hospital, I had only been there the one full day, and since everything up till that point had revolved around cutting me open, I hadn't talked to many people, and since my chart noted my American nature, nobody knew I could speak German.

It was this fact that led to a pair of nurses mentioning that "he sounds like some kind of animal" and laughing about that fact.

Quick language note: Laughter is universal (outside of Russia, where I think they just let out a sort of wheezing noise). But otherwise, everyone gets what laughter means, and I don't wanna get too uppity, but I think we can all agree that laughter is somewhat inappropriate when someone thinks they're dying from the embolism you told him he might have.

So, after I didn't "just breath normally" I was eventually rushed to an emergency CT scan to actually check for an embolism or anything related. The doctors who took me where just as…detached as the nursing staff had been. A fact I'm sure they thought was calming, but really was just terrifying (oh God, they don't even care that I'm dying!).

I mean…I was fine. Medically speaking…so, you know…point to them. But still. Fuck, right?

After I was calmed down (someone thought to have me breath into a bag. Seriously. After two goddamn hours that is what finally did the trick) one of the doctors who performed my CT was explaining what had happened to one of the senior doctors. In German, she said that she thought I had "been acting childish." Seriously. Again, I get that nothing was actually wrong, but I think that was stretching things a bit.

So when she went to leave, I thanked her for her help and professionalism.

I swear, the look on her face almost made the whole experience worth it.

So, like I said, the surgery didn't exactly go super awesome, but there's nothing else to be done for now.

That week after the surgery was pretty shitty, all things told, but I guess it could have been worse. The fact that there was no metal surrounding my leg was a bonus.

So, I was removed from the hospital after a week of little fanfare, and went to go crash at my dad's hotel. It was pretty chill.

I got my belongings from my friend's place, as she had awesomely been keeping it for me, and then sadly enough, I had to get on a plane and leave Germany. Again.

This country apparently really doesn't want me. But guess what, Germany? I'm coming back, motherfucker. You ain't never gonna be rid of me. I'm like herpes, but with a better jawline.

So, I'm now staying with my mom in Georgia (contact me if you need an exact address to send your fan mail/watercolored, nude self-portraits), and going through physical therapy.

There's no telling how things will be in the long run, but doctors are currently telling me, that eight weeks post-op, my ankle looks better than it has any right to. And as of the writing of this article, I'm expected to be walking without crutches in a month. Whether I use a totally bitching pimp-cane from here on out remains to be seen.

So, all things told…I didn't wear pants or anything for like two months and I peed in a lot of bottles. So I guess the whole thing wasn't a total waste.

I've already thanked them several times in person, but I can never really thank them enough, so I'm going to do it some more, right here. Also, I know that you guys totally want your names associated with a long, rambling, genital-centric internet comedy column, so, you know…you're welcome.

But in all seriousness, I really want to thank:

Melissa: For being more or less the absolute best that a human can be. I know you hate hearing it, but you really kept me alive by just being yourself. I love you more then I should really publicly express in a dick-based comedy article…but hey, I guess that's how life plays out sometimes.

And I'll never forget, that when things go really tough, you up and stabbed those doctors for me.

Mom: Not a lot of kids have parents that are willing to fly a third of the way around the world to look after them after their stupidity lands them in a hospital. My mom is a truly wonderful person, so I'll keep this entry short to avoid drawing attention away from that amazing fact. I love you, mom.

Dad: And honestly even less kids have two parents who are willing to punch both gravity and their personal schedules in the face to come visit and help out. But apparently I just lucked out on the "awesome people in my life lottery" so there you go. I love you too, dad.

All Of My Other Friends: …that weren't important enough to warrant a named entry. Just kidding. The fact of the matter is, if I named everyone who was awesome and there for me, this already rambling, three part article would be twice as long, because I apparently have just oodles and oodles of amazing friends that I wasn't properly aware of.

To everyone who visited me, called me, messaged me, or engaged in mortal combat for my amusement, thank you very much. You guys are proof that the world is actually pretty alright.

My Insurance Company: No, really. They were amazing the entire time, actually fought on my behalf when the first hospital was refusing me my second surgery, and where just staffed with the nicest people who honestly seemed like they wanted to help. Plus they were dirt cheap, and the fact that they were based in England meant they all sounded like extras from Harry Potter, a fact that I found more than a little bit arousing.

Related
German is a Lazy Language
Cole F.M.
Easy Steps to Getting Your Pre-Baby Body Back Before Leaving the Hospital
Stacey Zapalac
Welcome to Our World Cup Party Where We Know Very Much About This Sport
Lucy Huber
Resources