Mostly things that keep you up at night.

So here we are again, another year gone and we're all looking to the future. Oh stop it, you really shouldn't dwell in the past, just turn around and look at the future with me. No seriously, look over there. Do you see it? It's the future! My future! Shhhhh. We can talk about your future in some article that you write, but this article is mine so don't be selfish and let's just get on with this.

Here are some things I'm looking forward to in 2016.

I'm just waiting for someone to come out and yell, “You've been Punk'd!”… no seriously, any time now would be good.

No seriously, I don't know what the fuck is going on, but at the time of this writing, this utter douche nugget is ahead in the polls for the Republican candidacy! I mean, I can only hope that he's somehow bought his way to the top of all these polls and actually has zero chance of ever being elected president in reality. If the entire country, or more than half of them at least, vote this dickhead into office, then not only will I have to issue a public retraction for my ultra-patriotic Top 5 Reasons Americans are So Rude article, but I may just have to move to Canada, eh?

Hey, remember when Hitler was rising to power and everyone did fuck-all to stop him before he became one of the most evil men in history? Yeah, that's happening right now and we all are just sitting back, eating popcorn, watching it unfold like we're watching The Force Awakens for the first time, only with even MORE obvious parallels to the previous story. Don't let this happen, people… I implore you. When voting time comes, the only votes this asshole should get are ones to vote him off the planet, NOT into the White House.

To that end, I'm greatly looking forward to him NOT being president and not just because writing retractions and changing citizenship is a pain in the ass, eh? (I'm practicing my Canadian vernacular, you know, just in case.) 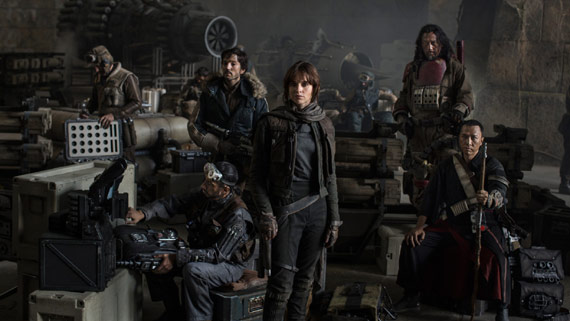 I know nothing about any of these characters and I plan on keeping it that way.

Speaking of Star Wars, or in case you were living under a rock all last year and missed that a bunch of new Star Wars movies are coming, there's a new Star Wars movie set to release on December 16th of this year! Now this one isn't part of the new trilogy but rather the first movie in a live action Star Wars Anthology series, a collection of stand-alone stories set in the Star Wars universe.

This movie is set shortly before the events of Star Wars: A New Hope and centers on a group of Rebel spies on a mission to steal the plans to the Empire's new weapon, the Death Star. Fuck man, I get chills just typing those words and not just because I'm a total geek at heart, but because I'm a total geek at heart with a hard-on for Star Wars so big that I could probably duel most Sith Lords with it and win.

Now personally, I know nothing about this movie and I'm planning on keeping it that way, just like I did for The Force Awakens. For instance, I didn't even know that Han Solo was going to die in that movie before watching it! That's how good I am about avoiding spoilers for Star Wars, despite being drawn to them like a Skywalker to desolate desert planets… perhaps. Or is Rey actually a Solo? Don't even get me started, Court gets pissy when I get too wordy in these articles.

One thing is for certain though, I am definitely looking forward to another Star Wars movie this year and may the Force be with you… always.

3. Pretending That I'm Less of an Over-Consumer

Brew a vat of coffee for all I care, just stop going to Sharbucks and Pamera every morning.

So as you all know from reading my past articles (just nod and pretend you read them), I spend just about every morning at one of two popular coffee establishments… let's just call them Pamera and Sharbucks so as to not give them away entirely. As you can imagine, this level of patronage is not exactly the most fiscally responsible way to spend one's money, but you gotta live, am I right?

Oh and by the way, fuck you, Sharbuck's employee that always gives me the “Whoa” big spender!” look every time I reload $100 on my Sharbuck's card. If your Grande White Chocolate Whateverthefuck Bullshit Mocha wasn't so goddamn expensive I wouldn't have to reload $100 on my card as regularly as I do.

Anyway, I recently got a free Schmeurig 2.0 K350 Brewing System through a promotional rewards program with the Schmoca-Cola company and I'm quite excited to start spending less money on breakfast each morning. Okay, sure, I'm still spending money to buy the individual Kcups, but it is far less money than I'm spending going to those two coffee places each morning.

In addition, the Kcups are also recyclable (after some disassembly) which means I'll be slightly less of an environmentally destructive, planet killing, douchebag, over-consumer than I was before and that's always something to be excited about. I may develop carpal tunnel syndrome peeling back the aluminum foil lid, pulling out the paper coffee filter and grounds for the compost and disposing the foil lid and plastic cup in their appropriate recycling receptacles, but hey, it's the environmentally responsible thing to do… you know, other than just not drinking coffee at all.

But you gotta live, am I right? 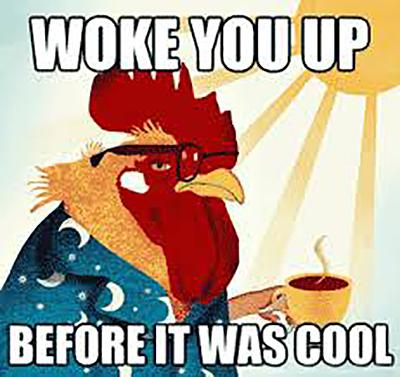 Get the fuck up, human, if I'm awake you're awake!

So you may remember from my past two New Year's articles that I now have chickens. What I didn't know about chickens then, that I do now, is that there's this little thing known in the chicken community (yeah, there's apparently a community too) called “Chicken Math.” What it basically means is that you're most certainly going to have more chickens than you originally thought you were going to have, because they're kind of addicting.

I don't mean addicting in the sense that Schmopeye's chicken is addicting, which it clearly is, but rather that they are really cute, quirky and fun to own animals and for whatever reason you can't seem to just stick to your original numbers. I started with four, I now have ten, that's just Chicken Math and I've learned to accept it.

What I also accepted into my flock is a rooster that I hatched out of an egg last year. Well, I didn't hatch him, one of my chickens did, but you know what I mean. Anyway, what I quickly learned about roosters, other than the fact that they do a wonderful job of keeping the hens in line and watching out for predators, is that they crow—not just in the morning, but whenever the fuck they feel like it. See, I thought, it was just in the morning, but nope, all day apparently. Starting at 4am, three hours before the sun even rises, that adorable little guy just lets it fly for seemingly no reason what-so-ever.

What I once thought was a given fact—that roosters crow at dawn—has turned into a full blown mystery of “Why the fuck is he crowing now?!” I'm not upset about it, because I rather enjoy the rustic sound, but as a scientist, the not knowing why is terribly frustrating. I'm really looking forward to getting to the bottom of this mystery and I foresee lots of fascinating poultry circadian rhythm and behavioral internet research in my future. The more you know…

5. A Pill to Prevent Sunburn 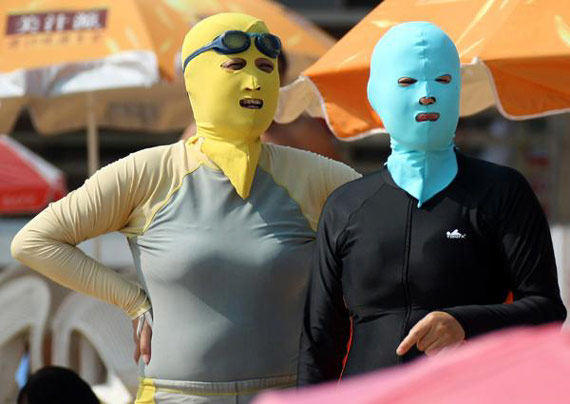 Let's make this sunscreen pill naturally select the Face-Kini out of existence.

So apparently back in 2011 British researchers analyzed coral samples from the Great Barrier Reef and discovered that algae living within the coral produced a compound that conveyed protection to both the algae and the coral from the sun's ultraviolet (UV) rays. It doesn't stop there. The fish that fed on the coral were then also protected against UV rays. So this compound was clearly being passed up the food chain. Researchers found out how this compound was being created and passed on and then biosynthetically developed it in a laboratory, thereby creating a sunscreen for human use that could be taken in pill format.

Now I don't know about you, but I think that's cool as shit, and not just because I abhor constantly applying sunscreen all the time. I also don't know why we couldn't just eat the fish that swallowed the coral that ate the algae… I'm guessing that we'd die as the song predicts. It also has uses beyond sunscreen in that it can be used to make sun-tolerant plants that could boost food supplies in temperate regions. Again, why not just eat that food to convey the sunscreen, but I guess you couldn't then sell sunscreen to everyone in the form of the pill in order to fund further research.

Anyway, I know everyone is all freaked out by GMO food and all, but here's a little tip: you're all idiots. All food is technically genetically modified, how the fuck do you think it got here in the first place? Also, I happen to know for a fact that every single one of you anti-GMO food fanatics know absolutely nothing about how genetics work, otherwise you would understand that without genetically modified organisms, you'd already be dead by now. Think about that next time you take any kind of medicine, herbal or otherwise, to cure your ailments, which in many cases is technically genetically altering whatever microorganism you have so that it can no longer survive inside your body.

Oh… and one more thing. Don't even get me started on you anti-vaxxers… you're worse than Donald Trump. I'm also looking forward to your genes being naturally selected out of the world's genetic pool. Look on the bright side, though, it'll be natural so you'll welcome it too.