3 Homemade Concoctions Baseball Players Can Use to Beat Steroids Tests

To truly get away with juicing, MLB players need to get creative.

Devoid of weekly revelations about players getting busted using performance enhancing drugs, and then lying about it under oath on national TV, Major League Baseball is as dull as an office printer.

Sadly, the league's testing system has caught up with all the concoctions players have injected into their rumps.

To reinvigorate this gorgeous game of "catch me if you can," players should start using new concoctions that may—although it's no guarantee—help them bop more dingers without testing positive for banned substances. 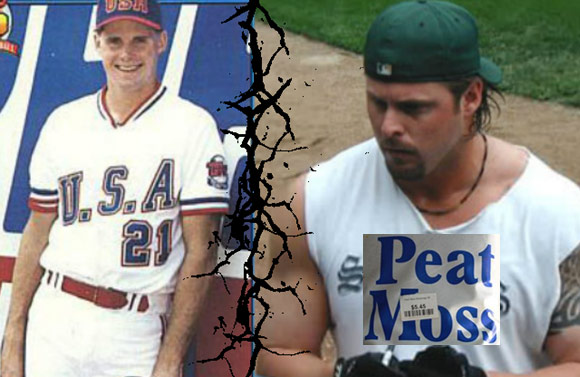 The first mixture should be:

Rumor has it peat moss helps plants or leaves grow. Or maybe it just prevents weeds from growing so flowers can. I've always been confused about this and I know others are. In a garden, real estate is finite. Like Tokyo, there's an overcrowding problem.

But let's be honest: No one knows what peat moss does. Grass seed is self-explanatory. Fertilizer is easy to grasp because it's like human procreation. Think birds and bees. Everyone over the age of five knows about that unless they live in Utah.

But peat moss is a scam. You can be sure sleazy entrepreneurs who run farm stores had an idea to create a bag of dark-colored (artificial) dirty wood chips that do nothing for a lawn. But by selling these bags of worthless yard trash, they beef up their revenues. Capitalism is good.

The second witch's brew players should start injecting in their buttocks cheeks is a liquified blend of:

No drug test could trace this because the three ingredients have never been combined in American history. You can't test what you don't know. If it is not on the list, it doesn't exist. Evasiveness reigns.

Rounding out this list of three, a mashed-up conglomerate of:

If anything will make players boost their bat speed, it's the helium jolt from the balloon air and gaseous toxic waste aromas marinated in New Jersey.

Nitroglycerine won't enhance players' performances. But it will overpower and nullify the MLB tests for toxic waste and helium. When the test reveals the player has nitroglycerine in his system, the league will think the test is flawed because anyone with that in their system instantly croaks.

If players take any one of these three steps, Major League Baseball will regain its proper place as the epicenter of American fraud.

Related
Calling All Baseball Game Popcorn Vendors, Pharmaceutical Reps, and Bar Mitzvah DJs: We Need You to Hand Out Covid Vaccines
Leah Roemer
Eight Reasons Why 2019 is Going to Be a Big Year for My Hometown’s Minor League Baseball Team, The Woodborough Egg Boys
Ryan Ciecwisz
How to Get Past Your Baseball Team Losing in the Playoffs…Again
Michelle Milliken
Resources