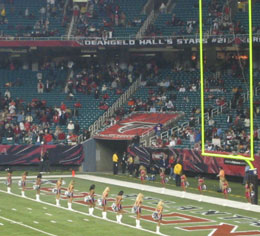 On Monday night I attended my first-ever NFL game. Which is weird considering my two favorite sports to watch on TV are tennis and NFL football, and I live 10 min walking distance from the Georgia Dome.

So Lamar and I walked over to the game after 4 minutes of the 1st quarter had gone by to meet up a couple of other friends who already had tickets. About 1000 yards from the Dome we ran into our first scalper. After a little negotiating, we managed to pick up a couple of tickets for the back half of my head. It was amazing how clean and sanitary the whole process was, you know, for a sidewalk medical procedure. No, but really, the first guy was selling his ticket for $45, from which we talked him down to $30. That was a $59 face-value ticket. Just one. That was confusing to me, because I thought we were all going to sit together. Not a problem, because I then bought a $15 face-value ticket for $30 too, and apparently it's just a free-for-all once you're inside. Somehow I felt ripped off walking into the Dome, as if Lamar was going to start laughing his ass off and sit at lower-level midfield once we went in while I climbed my way through the duct work to secure a safe seat in the rafters (picture).

Since this was a Monday Night game, the attendance was apparently a lot higher. I dunno, I don't really keep up with sports stats and trends like attendance, total rushing yards, QB pass ratings or any of that nonsense. I just watch and enjoy the game. I'll even get all into a random NFL game or basketball game and suddenly I'll find myself cheering for both teams. People will be all confused like, “So wait, who are you going for?” As if there's some sort of requirement that all males must possess an inherent hierarchy of teams for every sport imaginable. Listen, I'll root for whoever has the best team colors ok? Just shut your stats-whining Sportscenter-rambling and actually look at each play for what it is. I don't understand these people who know every number in the book but can't understand the dynamics of the game. Like why a play develops a certain way or what role something small like the QB's arc of a pass has to do with why a receiver actually dropped the ball.

Anyway, the Dome was about 72,000 deep and the atmosphere was pretty much all that it was cracked up to be as far as intensity (video clip). The only thing I had a problem with from the upper deck behind the end zone was that a 15-yard completion from the opposite 5-yard line looked the same as a horizontal pass. I had to note what yard line the ball started on every play behind the 50 because the depth perception factor is horrible. Then again, we sat about 10 rows up at the 50-yard line later in the game when some seats opened up and it was impossible to see how a play developed from sideways at eye level. So I'm still not sure where the best spot is to sit.

I was surprised that on 3rd down defensive stands the crowd sounded even louder in the Dome than on TV…and I turn my TV volume all the way up on 3rd downs. Long story about on par, both QB's has shitty days, but Testaverde had a mid-life crisis in the 2nd quarter, and the Falcons ended up winning easily.

I think I'll be back for another few games this season.

And now, some random internet advice:

p.s. Chad rated the Top 50 Greatest TV Characters, with accompanying image links and commentary. I find this to be an impressive literary/pop culture feat.