I watched a lot of soccer on TV in preparation for the World Cup. Unfortunately, a bunch of channels catering to adult-themed interests were also included in the subscription package. My current schedule doesn't privilege me with much time for leisure, so I have to multi-task. Luckily, technology blessed us with an invention known as "picture-in-picture," so I can enjoy soccer and pornography simultaneously.

Orgasm: try all you like to mask it with a pillow, it's still the not-so-silent killer.

With side-by-side comparison, I noticed a blatant similarity: bad fucking acting (no pun). Imagine how stupid you would look in everyday life if you fell on the ground flailing, crying, and screaming, accusing a guy 20 meters away from you of foul play. The same goes for sex. You are on the ground, bed, couch, truck stop washroom, janitor closet at Chuck E. Cheese's, flailing, crying, and screaming in ecstasy until your partner informs you that he "hasn't put it in yet."

Did you know that it is actually possible to die from orgasm due to the increase of adrenaline and heart pressure? Orgasm: try all you like to mask it with a pillow, it's still the not-so-silent killer. 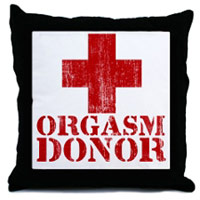 Death by suffocation: the humane alternative to death by orgasm.Sex is dangerous beyond the level of sexually transmitted infections, the worst of which of course is life. This explains everything to me. That's why women never call me the next day. They all died from heart-exploding orgasms that I deliver with quality and efficiency every single time. Well, it doesn't quite explain everything; I recently found out that orgasm usually kills the male more often than the female. But it does explain why all those guys never called either. I just figured they were insensitive assholes.

In case you haven't already figured it out, I just used soccer as a platform to lure you in long enough to brainwash you with my hidden message: monogamous gays are destroying our society. Actually, that's not true at all. What I think is actually bringing civilization to an end are the super-homophobic closet homosexuals who feel the need to represent a level of machoness that doesn't even exist. Calling everyone a "fag" and freaking the fuck out at the idea of being in the same room as a gay man are the qualities embodied by the same guys who get drunk together, then take off their shirts, dance, hug, and say how much they love each other, usually accompanied by tears.

I was sitting in a coffee shop in a small town alone and a guy my age started talking to me, about nothing at first, but at a point the conversation steered towards his hatred of homosexuals. He told me that, "If there was a fucking fag here right now I'd kick the shit out of him." With which I replied the only thing that seemed to make sense in the world: "I'm gay." Those familiar with the Kubler-Ross model should know his reaction was, "No! No way you're a fucking fag! You aren't gay!" Followed by, "I should fucking kick your ass!" And of course, "If you leave right fucking now I'll walk away!" Then, calming down, "What the fuck man, what the fuck?" Those were the last words he spoke before getting up and walking out. During this whole exchange I was offering to fight him.

Maybe he wasn't serious about his threats after all. Maybe he came to the realization that it wasn't worth fighting about. Maybe it was because I was twice his size. It seemed worth fighting for to me, even though I am not gay (lie). He was probably just dealing with his own issues concerning sexuality. I'll bet he went home and viewed copious amounts of pornography to try and gain some affirmation about his sexual preference.

If you (the person described in the story) ever read this, I just want you to know that your sad devotion to heterosexual pornography has not helped you conjure up an erection, or given you clairvoyance enough to find a woman attractive.