What if you were the one person who wasn't prepared?

I still see it every night in my dreams: the bellbottoms, the go-go boots, the mass of bodies writhing and twisting expertly around me, their voices rising and falling in an angelic, deafening harmony, drowning out my cries for help. I wake up screaming, my sheets soaked through with sweat.

A lot of people have asked me if I noticed anything weird. “Couldn’t you tell?” they say. “Didn’t you wonder why everyone was in clothing from the 60’s?” I didn’t. I mean, I guess I remember being vaguely aware that the people around me seemed more attractive and cheerful than usual. Yeah, I couldn’t help but notice a pillbox hat or two, and there were more mustard mini-dresses than one typically sees in mid-October. Still though, I didn’t think much of it. I was too busy hate-stalking one of my boyfriend’s exes on Instagram.

The next thing I knew…. I’m sorry, this is still difficult for me to talk about….

I was looking at a picture of Meghan’s stupid fucking family vacation in 2014, waiting for the N, when I heard singing coming from the top of the stairway. I looked over to see what I thought was the most coordinated drunk I had ever seen. His blue-black hair was slicked back, and he was wearing a brown knit vest over a crisp white shirt, and cuffed jeans. He slid down the handrail (“Gross,” I thought), followed by a small, delicate blonde in a poodle skirt. She looked nervously around her as he belted out a line about showing her HIS New York. He took her in his arms, and they began leaping and bending in an intricate pas de deux.  I was just turning to roll my eyes at the woman next to me (“Hipsters, amirite?” I was gonna whisper) and that’s when everything erupted.

Haven’t we all felt like that? That horrible realization that we’ve been so caught up in our lives that we’re not even really living.

All around me, men grabbed women next to them and spun them around. I screamed, but my voice was lost in the chorus of voices singing “This is MY New York, the dirty subway New York, not your Saks New York!”

Panicked, and more than a little embarrassed that I was the only one who didn’t know the routine, I tried to make my way to the stairs through the dizzying, sensual mess of choreography, but a kitten heel struck the side of my face. As I stumbled to ground,  a man in horn-rimmed glasses yanked on my hand and began doing the twist. My right arm snapped back and forth between us.

“What are you doing?!” I shrieked, “Please stop this!”

As he twisted me around, I began to cry.

Suddenly, all of the lights went out except for one that shone directly on the couple. The sweet, sad voice of the blonde filled the platform. She sang about how she was seeing her city, her life, as if for the first time. For a moment, I was transported. Haven’t we all felt like that? That horrible realization that we’ve been so caught up in our lives that we’re not even really living. Then I remembered I was trapped in the big production number of a musical.

The couple ignored me. The black-haired man cooed about how lonely his New York could be, how he wanted to share his New York. To share it… with her.

I tried to run towards them, but a chorus-member reached out from the darkness and grabbed me. I started to scream again, and a hand clamped down on my mouth. I turned my head slightly, and saw the man with the horn-rimmed glasses.

“That’s not part of the scene,” he hissed in my ear.

The voices of the chorus rose and grew to an almost unbearable climax (“OOOOUR NEEEEEW YOOOOOOORK”), and the couple skipped up the stairs. Later, as I replayed the scene over and over again in my head, I would wonder why they even came down into the subway if they weren’t going to catch a train, but I didn’t question it at the time. I just wanted to leave.

As soon as they were out of sight, the man with horn-rimmed glasses removed his hand from my mouth, and the lights flickered back on. The N came and everyone boarded but me. All I could do was stand there, frozen, as train after train passed in front of me.

A few weeks later, I was fired. I had begun drinking before my commutes, certain that I would be caught up in a musical once again. I drank in the morning before work, and in the afternoon before leaving, and more and more until there was no gap between the two. Shortly after, my boyfriend and I broke up and I had to move home with my parents. I hear he’s back with Meghan now. 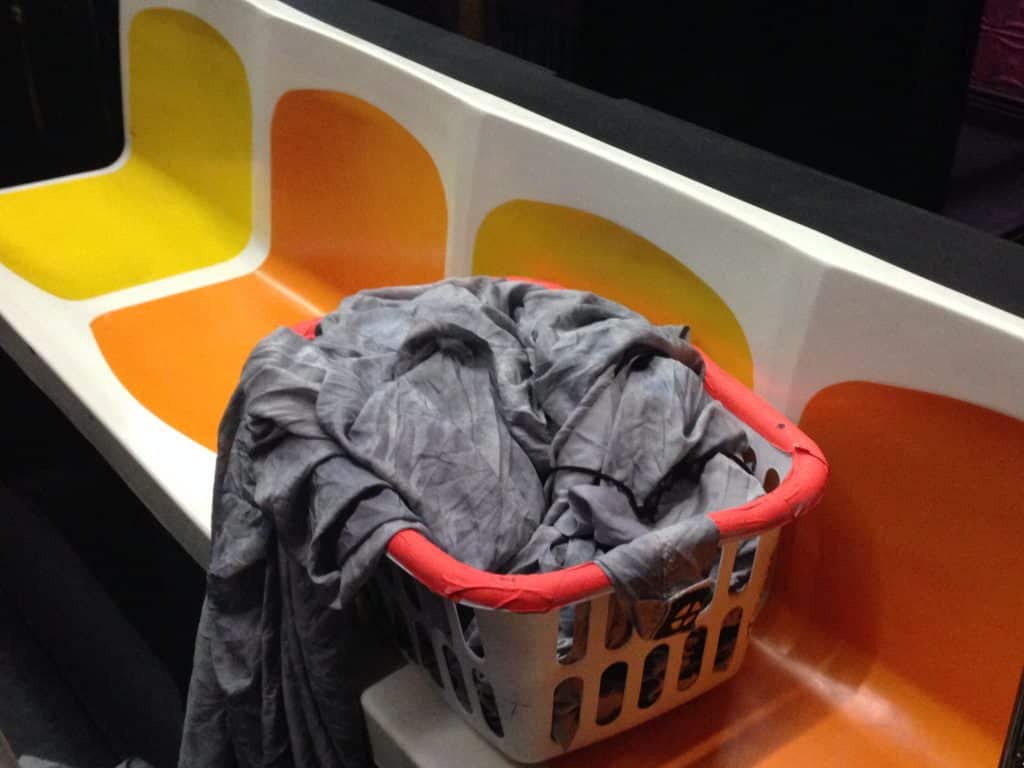 Sometimes, I think back to simpler times. I remember going to musicals with my family or my ex. “How do all the townspeople know the choreography? What if you were the one person who didn’t,” we laughed. “It’s not a joke,” I would tell my old self now. “It will ruin your life.”

There must be others out there like me, scared and unprepared. Maybe I’ll find them someday. Someday, but not today.

Related
I Just Painted My Social Security Number on the Side of My House for My YouTube Channel!
Trip Fielding
Popular Instagram Life Coaches for Women
Valerie Visnic
The Awful Male Lead in a Rom-Com is Caught After Lying the Entire Movie
Ben Hargrave
A Few Words Before the Opening of “Bagel Bites the Musical”
Jimmy Pitts
Resources