John Adams: Mr. President, we got word that a stage coach was captured by terrorists on its way to New York, 5 days ago.

George Washington: 5 days ago? Why would I care about something that happened 5 days ago?

John Adams: Well, because we have to use telegraphs and telegrams, you asshole. It takes a couple of days to get up to date information.

George Washington: So, how does this affect me?

John Adams: Well, you are the president, so, it's kind of your thing. Plus, Martha is on that coach.

George Washington: Mother fuckers. We know who did this? Indians, the Russians?

John Adams: …Uh, it's the British, sir. Why would the Russians do this?  Have they done anything relevant in this time period?

George Washington: Shut the fuck up! My wife is in danger. I'm not thinking straight.

John Adams: Yeah, I can tell. Sir, we need a course of action. Are you going to do anything?

George Washington: This explains a lot. She hasn't cooked me dinner in like, yeah 5 days.

John Adams: Jesus Christ, will you do something?

George Washington: Alright, follow me, John. I have to show you something.

John Adams: You're not going to pull your penis out again, are you?

George Washington: I was drunk, will you drop it? It was like 3 years ago. I was excited about becoming president, and they kept giving me wine. So drop it. We need to go to the basement.

John Adams: …We have a basement?

George Washington: Yeah, we keep national secrets down there. We need to consult the crystal ball.

John Adams: So, what does this magic crystal do?

George Washington: Well, if you didn't sound like a pretentious asshole, I'd tell you.

John Adams: Seriously? That's what you do? Let me guess, this is how you won the war?

John Adams: Well, fuck me, right?  So where did you get this ball? 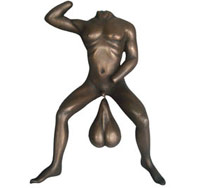 "Adams, have I shown you my bronze balls? They're strictly for economic policy-making." George Washington: I traded a slave his freedom for it.

John Adams: Right…let's just get this over with.

George Washington: Okay, we're here. You need to go first. Only one person can go down the steps at a time, yell to me when you get to the bottom.

John Adams: Okay. Man these steps are terrible. Okay, I'm at the bottom. Why is there no door? Hey, George, there isn't any door…. You mother fucker!

George Washington: Haha, look at the penis. Bask in its glory. It won the war for us!

John Adams: I am sick of this shit, fuck you George!

George Washington: It never gets old! You believed I had a crystal ball? Adams, you are such a tool. That's why I am the president.

Related
Sesame Street’s First Cinephile Muppet Is an Attack on Our Nation’s Core Values
Ryan Ciecwisz
Some of the Ways I Have Prevented George R.R. Martin From Finishing “The Winds of Winter”
Thomas Batten
Sick, I Just Filmed Your Shark Attack on My Phone!
Rob Gregory
Resources

Every kitchen knife I own is dull, and my forks aren’t very interesting either.