How to use the Chinese toilet, if you absolutely have to.

Living in Shanghai, it's rare that I ever find a public restroom in restaurants, bars, malls, and train stations without a Western-style toilet. For those of you who have never been to Asia and are therefore unfamiliar with the Eastern-style toilet (also known as the squatty potty or squatter, by Westerners) I will provide a brief description of what an Eastern-style toilet looks like, as well as how to use one.

The typical squatter is a porcelain basin built into a raised platform with a hole in the center, which, you guessed it, is your target. It's called a squatter because you have to get as low to the ground as possible with your pants pulled down to your knees (I imagine it would be a lot easier in a skirt). A Westerner's greatest fear is, obviously, peeing all over herself. I've heard that it's easier to do when you're drunk, but that is not my experience (we'll return to this later).

The fear, now, was not only that I might pee all over myself, but also that I might fall into the ravine of disgusting below. The first time I ever had to use a squatter was completely unexpected. It was in a restaurant in Shanghai, which are usually equipped with at least one Western toilet. Fear, terror, and utter disbelief washed over me when I found that every stall had a nice shiny squatter waiting for me. Unfortunately, I had reached the brink and could not hold it in any longer. I knew it was time to do the squat.

This particular stall had a metal bar attached to the back of the door, which I clinged to so hard that my knuckles turned white. This was before I knew the proper way to use a squatter—I really had no idea what I was doing. Using the bar in front of me, I was able to lower myself as close to the ground as possible. I was like a ballerina practicing her pliés at the bar. While I squatted successfully, it was definitely not something I wanted to do on a regular basis. I remember Jerry Seinfeld opening an episode with a joke about how the most terrifying moment in a person's life is when he flushes a toilet at a party and the water starts to rise. Clearly Seinfeld has never found himself looking down into a squatter. The first time I used a squatter was the hardest and most terrifying experience I've ever had (including being hit by a motorbike). 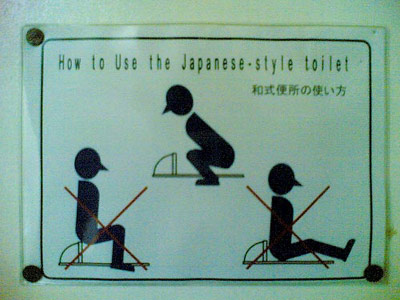 Whenever I was away from my hostel in Beijing or Xiamen or Hangzhou or Zhenjiang, I would refrain from drinking anything so I wouldn't have to use a squatter. But this is no way to live.

The worst experience I have had with a squatter to date has scarred me. My current success with squatters, I think, was in part due to being able to control the flow—you want a steady stream. However, after having a few beers we all know that it's never a steady stream but a rush of water after a dam breaks. When I was visiting a friend who works at Jiangsu University, located about two hours outside of Shanghai, I had had a few too many beers with my dinner of street food and could not hold it until we got back to my friend's apartment.

We stopped at a public toilet on the campus, which contained the nastiest and strangest squatter I have yet to see. It was something akin to a trough, and in order to pee into it you had to climb up on the side of a wall and look down into a ravine of used toilet paper, tissues, and feminine products. There was also no privacy. You go in and drop your pants in front of any girls who may be using it. I still have no idea how I was supposed to use it. The fear, now, was not only that I might pee all over myself, but also that I might fall into the ravine of disgusting below. As I've said, I had been drinking and therefore found controlling how fast and how much I was peeing to be quite difficult. Then one of my worst fears was realized: I peed all over myself, and embarrassingly had to relay this to my friend.

After this experience, my reluctance to squatting has grown. Or rather the fear of being unable to use a squatter has grown. When I was at a café in Gulang and really needed to use a bathroom, I was hopeful that the single bathroom that the waitress needed to unlock for me to use might actually have a Western toilet…I was wrong. I didn't want to risk the embarrassment of peeing all over myself, so I actually took my pants off and held them as I squatted. I was desperate and this seemed necessary.

Living in Asia will in fact require learning how to do the squat. Not only that, it will require gaining the confidence that I can successfully do it. It is common to get a bit of stage fright. My roommate Ashley told me that the other day at work the single Western toilet seemed to always be occupied, so she planned to use squatter. However, once she got in one and sunk as low to the ground as she could, she found that she was unable to go. She had squatty potty fright.

As I said, this isn't really an issue that we have in Shanghai, since, for the most part, you can always find a Western toilet. But in any city outside of Shanghai, you will have no choice but to squat. Something else I've encountered in Zhenjiang is bars without bathrooms at all. This past weekend, my friend Teigha had to show me how to properly pee in the street. Believe it or not, it is actually easier to pee in a dark alleyway than it is to pee in a squatter.

I try not to judge certain aspects of the Chinese lifestyle. I do my best to understand that their culture is drastically different from my own and I just have to try and adapt to it. But some things in China are just disgusting. These are some of the adventures and downsides to travelling that I have to accept.

If math is hard, then why are mathletes so soft?