The seven levels of economic health, based on a nation's crappers.

Several composite development indexes have been created to determine the economic ranking of countries worldwide. Common variables include income per capita, infant mortality, life expectancy, and number of chickens per family. But these are futile exercises in overanalysis, funded by corporate write-offs, misguided philanthropists, and wasted tax dollars. If you want to know where a particular nation ranks on the scale of haves and have-nots, all you need is a brief study of the average sanitation facility in a domestic environment.

Simply put, check their crappers. The following are the seven levels of economic health, based on toilet development.

The first and highest level is the sparkling clean, oval porcelain goddesses, complete with adjacent washing facilities and four-ply, scented paper. This is roughly equivalent to what many deem "The First World." Easily flushable, with a shiny appearance and plenty of leg room, these toilets clearly represent advanced economic development. Cottage industries have sprung from these masterpieces, including scented wet wipes, plungers in all shapes and sizes, designer toilet seats, various bowl cleaners, and bathroom reading material, to name a few.

This category can be further sub-divided into classes:

I got into a serious argument with a German about strengths and weaknesses of the U.S. version. He claimed that American toilets contained an excess amount of water that would uncomfortably splash up in his ass. I fired back that a submerged turd smells a thousand times less than a mud shark angrily climbing the walls of the bowl. Furthermore, faced with the choice, I would take a droplet up my ass every time over seeing the vicious skid marks of the previous user. I think I won that debate on behalf of my country. You just can't argue with progress.

The second level, found in less renovated parts of the Old World and increasingly so as you move further into Eastern Europe, is the shelf toilet. This model is often accompanied by a pull-handle that is subject to frequent manual repair from overeager flushers. The original idea was that you view your feces in order to determine whether your diet was producing the proper results. 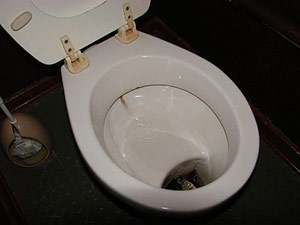 I will admit, there is something squeamishly fascinating about eyeballing your turd in full glory on that shelf, and something quite thrilling as water cascades from the back, creating a short, forceful waterslide for your creation. But despite the artistic beauty, the millimeter of water on the shelf does very little to mask the odor. And in the 21st century, do we really need to inspect our excrement at so closely? I'm pretty certain of the result based on exertion and consistency. If anything feels wrong, I can scamper to the nearest pharmacy, proctologist, or faith healer. The shelves have outlived their usefulness.

Level 3: Separation of Bowl and Paper

The third level of development is the toilet that appears normal on first glance, yet refuses to accept paper. One flushed wipe is enough to wreck the sewer system of an apartment block, neighborhood, or even small town. A nearby bin, container or bucket serves as the waste paper receptacle. These bins are usually uncovered, letting you see the vigorous efforts of previous visitors. The paper, too, tends to be on the rough side. Not quite at grocery bag levels, but a far cry from Charmin.

This type of facility provides the closest tangible link to actual development. The "Lucy" of toilet, if you will. The authorities didn't build the pipes wide or strong enough. Build a better infrastructure, starting from the toilet on down, and your whole economy will take off. Visitors will visit; visitors will flush their waste paper; visitors will be pleased with the process and be anxious to return. Tourism will grow for certain. And even if the short-sighted populace can't see the immediate benefits of infrastructure projects, and you lose the next election in your semi-democratic state, future generations will write your visionary history. 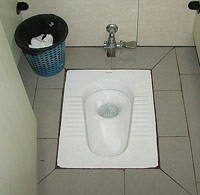 Lemme see you get low, you scared, you scared… The fourth level is the porcelain pit, ubiquitous throughout Asia. I'm well aware that these toilets produce better results, as the large intestine is better positioned to evacuate its entire contents, and I'm also aware that pit toilets come in various levels of hygiene, design, and appearance. But let's be honest with ourselves here. In the age of rapidly spreading worldwide obesity, the discriminating chunky consumer is not going to settle for squatting over a pit toilet. McSized asses (including those sprouting up over all Asia) are clamoring for higher seats (so-called "comfort height toilets"), and won't even entertain the thought of a pit.

This fifth level is an amalgamation of the above; a catch-all category for porcelain that fell through the cracks. These are the toilets (including pit toilets) that had their heyday, but fell victim to overuse through the generations. One or several parts have fallen into disrepair. A nice seat has been replaced by a flimsy plastic equivalent; the water tank has been jury rigged; you need to scoop water from a barrel to flush; or the seat is gone, leaving you to hover over a piss-stained bowl.

The quality of toilet paper, if it can be called that, rubs your ass raw after two wipes. Alternatively, there might be a water option for wiping, but you won't find any high-end bidets here. You'll be making do with a pot of some type and a few scoops. Aim carefully, because every drop counts.

These toilets (and associated wiping methods) are an indication of stunted economic growth. A government that long ago made an effort at improvement, only to say fuck it, and fall back on the less taxing management style of corruption, neglect, and sloth. 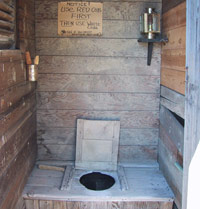 "Use red cob first, then use white cob (to see if you need another cob)."The sixth level is the outhouse for the home. If property size allows, the lucky can build these farther away from the abode, somewhat mitigating the stink. For those without the luxury of a large plot, the outhouse is pressed up against the house, or even inside the house, ruining meals and downtime with its fetid odor.

Outhouses begin as ramshackle structures and degrade over time, even with tender loving care. Some manage a real seat, some have a wooden bench, and others squat over the hole. But regardless of the seating arrangement, you can't make silk out of a sow's ear. You're still shitting in an outhouse, with nothing but a stack of old newspapers or random household paper to clean up. Your tax dollars, if actually paid, collected, and not stolen, have obviously not gone into the correct rebuilding project. Your country still has plenty of economic steps to climb. 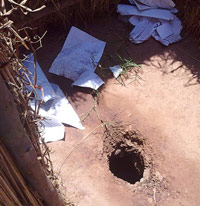 You can only go up from here.The seventh and worst level is for those the world has left behind: the poor bastards without a proper toilet per se. The highest end of this model may have an elaborate chamber pot, while the lower end digs a hole in the dirt or sand. Paper and water are to be preserved for survival, so citizens in these conditions wouldn't dream of wasting it on their ass. They also wouldn't dare to manipulate food with their left hand.

The only advice I can offer the true unfortunates is, next time you're squatting over your hole, staring up at the starry sky, and waiting to expel the mostly indigestible, low-calorie, desert cabbage, pray that the next strongman will depose your current dictator soon, and that he has a greater appreciation for the smaller conveniences in life, like the almighty toilet.

Related
For Sale: Beautiful New Home, 3 Beds, 3 Baths, and 8,723 Toilets
Caroline Cotter
Pissing on the Toilet Seat is a Sign of My Dominance
Andrew Byrd
Resources