The best thing a college student can look forward to when going home is toilet paper. You could argue that your Egyptian cotton 8,000 count sheets, a refrigerator stocked with un-molded strawberries, or even carpeted floors that haven't been vomited on would be contenders, but often as we use toilet paper, it is the most important. You know, I'll even go as far as to say T.P. beats the powerful water pressure of your own shower.

When I was a freshman returning home for Thanksgiving break, my first time home since I had left for college, I returned with a chapped butthole. I never realized the abuse it had been taking since I had gone away to school. I guess the food was bad, so I pooped more. Laxatives in the cafeteria eggs or something. I wiped more frequently and had to use more just to feel clean. But it wasn't until I came home, 18 years old, when I really understood the phrase Angel Soft. I believe there was even a guffaw of pure pleasure at the softness of angel wings comforting my wounded booty. I believe I told my entire family just how great it was to be home. 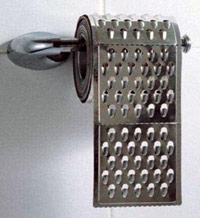 Murphy's Law: The bigger the college shit, the grater the toilet paper.It became something to look forward to. When driving home from college at the end of the year, with my car weighted down with the elephant-poundage of dorm room trinkets, I practice speeding-for-peeing. This breakage of the law should be factored in as acceptable. I'm waiting for the day an officer catches me, puts on his flashing lights, and directs me over the curb. If I haven't peed my pants already from the shock of it being my first time pulled over, it won't be long. I'm sure I'll only be able to think of waterfalls and rushing rivers.  He'll slowly look up my license plate number and walk pokily to my window.

"Going a little fast, weren't you, sweetheart?" donut residue around his mouth.

And I would remain silent.  Or moan.  Or exhale a sigh of relief, as my seat would become flooded with urine, not worth speeding for.

My family has Costco toilet paper with quilted rosebuds on pillow-like softness. I like it, although it's probably too thick for a septic tank.I assume police officers don't usually issue urine-related tickets.  I'd drive home, abiding all speed limits, and dry myself off with my home's own cotton softness.

Since that hasn't happened, yet, I will usually pull into the driveway, rip my key from the ignition, and bound up the garage steps.  I'll fling open the door and be greeted by, "Erin! You're home!"

All I say is, "HeyMom.Heydad.It'sbeen6months,butIneedtogo.Holdonjustasecond."

Hunched over, I'll invade the nearest bathroom. It's the same one where I had the Angel Soft realization, the tiles frozen from suburbia air-conditioning.  I'll emerge a new person, with my crotch singing songs of white bunnies and happy butterflies.

In college, my roommate would come home holding her crotch. Her ringlets would have turned to pouff, quite unlike how she left in the morning, and her crossed legs would hobble over to her desk.  She'd drop her biology-laden backpack on the tile floor.  Looking like she was going to leak all over the floor, she would say, "I joined gospel choir."

I would look at her and point toward the door.  "Go. Now. Tell me when you get back."

"How was your day?" she would ask, jostling one leg to the other.

Knowing she didn't have the patience or any available bodily capacity, I pointed to the door again.  She would grab tighter, stand straighter, and then she'd bolt.

I would hear her red Crocs squeaking as she ran down the hall.  I could see her clutching like a 5-year-old, probably getting to the stall and forgetting to lock the door. 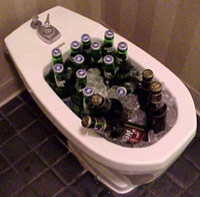 Beer bidet: the only way your alternate dorm cooler COULD get worse.The French used to wipe with lace, which sounds fancy, but just seems like a bad idea.  Plus, the thought of flushing lace somehow seems like a sin.  In college, the toilet paper is worse than lace.  It is thin, 0.825 ply at best, and you can see your hand on the other side.  You have to dispense, and dispense, and dispense, just enough to shield your hand from coming into contact with any foul matter.  It's critical you wash your hands in college.  I'll admit that the process seems so clean at home sometimes I don't even bother.

I go to an environmentally friendly school, and most people consider flush water to be perfectly good drinking water, so we don't flush if you just pee.  At those urination stations, the toilet paper will disintegrate after about five or so visits.  At home, if it's yellow I let it mellow, and I've never seen it disintegrate.  That must say something about quality.

You know that little line of glue, the starter glue? It's barely there in college toilet paper.  Which means that first couple squares, fallen from grace, have probably touched the ground somewhere, and you don't want to use them.

At home, I find joy in keeping the thick two-ply together as I peel it back, glue ensuring the sanity of the sanitary.  Once it's empty, I think of all the gerbils and rabbits that would like to feast on the cardboard, but since I don't have either, I throw it away.  It's like the seed, that cardboard roll.  The seed to the toilet-paper fruit.  Like an apple.  You're really eating the ovary when you eat an apple, or something like that.

I think my family buys our toilet paper in bulk, from Costco.  It's wholesale and has quilted rosebuds on pillow-like softness.  It's four inches of cotton ball whiteness.  I like it, although it's probably too thick for a septic tank.  When you rip it, the perforations rip with a satisfying pt. short and simple.  It's like it's saying its T.P. name backwards.  pt. pt. pt.

If you went to college a long time ago, or never went, have you been camping?  Have you ever wiped with leaves, pinecones, rocks, or mail order catalogs? Then you understand the enjoyment of coming back from an uncivilized place like the outdoors, or a McDonald's restroom. The toilet paper at home can be 4-ply, and it's just waiting to be used!  It's like your best friend.

Toilet paper was originally named therapeutic paper, because it saved people from using other medieval wipe-y things. It's therapy for your bunghole.  And it's almost always there for you.  It's so predictable it seems to be the sort of no-nonsense platform on which we could elect an honorable public official. At least he would have my vote.  Some slogan like, "Keeping you clean and clear since forever!" Maybe that sounds more like a back-ne ad.

I really do look forward to coming home to toilet paper I have grown to love and cherish. My bed is almost as good, coming in at a close second with those 8,000 count Egyptian cotton sheets.  I might move my bed up to the most important, if only it were made with perforated sheets of Angel Soft.